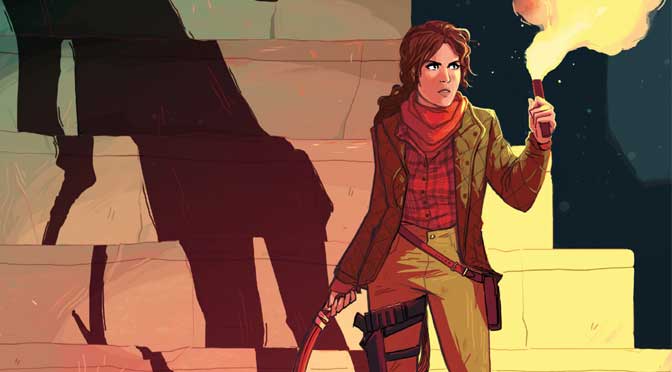 With Tomb Raider: Survivor’s Crusade, American comic book publisher Dark Horse Comics is once again attempting to tap into the videogame demographic. This new comic book miniseries leverages the significant goodwill in Tomb Raider, and more specifically, the 2013 reboot of the franchise which has updated the property to be more in line with contemporary audience standards, both in terms of visuals (specifically, much of the overt sexuality of the appearance of the lead character, Lara Croft, is gone) and storytelling.

Right off the bat, it is worth noting that Tomb Raider: Survivor’s Crusade is unapologetic in requiring the reader to be familiar with the 2013 reboot of the videogame franchise. The story is set right after the second game in the series, Rise of the Tomb Raider, and drops the reader immediately in the middle of one of Lara Croft’s tomb-raiding jaunts. Any reader who has not played the two games will be completely lost. This title dovetails into the games.

The story in this first issue is very standard for the franchise, involving dark cabals, mystic relics, and the death of Lara Croft’s father. Lara Croft is tracking down an ancient organization called the Trinity, which she believes to be tied to the circumstances surrounding her father’s death. The Trinity, as is expected of a shady, ancient, paramilitary organization, has ransacked a secret cathedral devoted to the Catholic patron saint of travelers, Saint Christopher. Lara ambushes the members of Trinity and sequesters an ancient artifact called the Cross of Stars, before finding out the identity of the person who killed her father. The events are framed by an SMS conversation between Lara and her friend Jonah Maiava, with Lara apologizing for putting herself in danger and Jonah asking her to let the proverbial sleeping dogs lie.

There is a lot of action in this comic. That is unfortunate. One of the appeals of the 2013 reboot of Tomb Raider is that it grounded the character and sloughed off the cheesy, female action hero schtick that started with the 1996 videogame and heightened by the Tomb Raider movies (most notoriously, the second movie. Actor Angelina Jolie, playing Lara Croft, bleeds her arm into the ocean so as to attract a shark, and having lured a great white pointer, subdues and then stands upon its back, riding it to safety as if the monster shark was a show pony). The game’s reboot however made sure to characterize Lara as athletic and resourceful, but still vulnerable and subject to human limitations.

While Survivor’s Crusade does not have Lara simultaneously wielding two machine gun pistols and performing impossible acrobatic moves, Lara is still ridiculously effective as a combatant. The character easily assassinates several heavily-armed Trinity members without raising any alarms. At one point in the story Lara shrugs off a bullet wound to the shoulder – and then subsequently uses her fingers to dig out the bullet without so much as a wince. Lara Croft is not Wolverine (a character published by Marvel Comics who can promptly heal from any injury). Yet here she is depicted as impossibly tough.

Aside from the cartoonish portrayal of Lara as a super soldier, the framing narrative device itself is largely ineffective in setting up the backdrop. Readers who have not played the two videogame reboots will find no reason to sympathize or relate to the bond between Lara and Jonah. On the whole, the mystery about the Cross of Stars and the Trinity’s plainly ridiculous plans for a new world order requires much more setup than what twenty-four pages of sequential art can provide. Otherwise, the premise comes off as hokey, thin, and unoriginal.