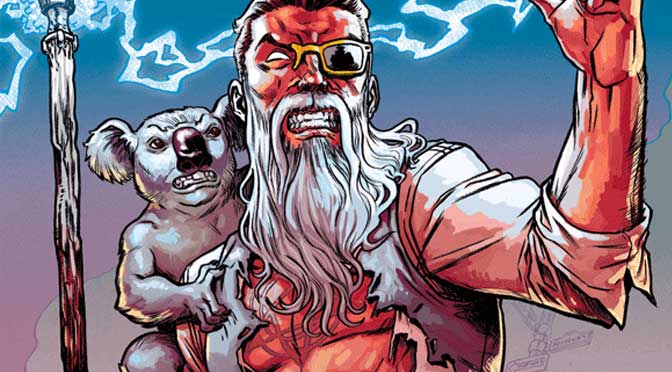 The epic fantasy quest is an old trope for that particular genre. A magician or wizard appears and warns of a great danger that is coming, one that can only be overcome if the heroes of the story band together, particularly a chosen one, and stops the evil the wizard has special knowledge. Something like that is the basic concept behind Charles Soule’s Curse Words from American publisher Image Comics, only the warning never comes. The wizard, named Wizord, could very well warn the world about the great threat. Wizord is just leaving out one crucial detail: Wizord himself is the threat to the modern world.

Fortunately for the people of the Earth, Wizord quickly realizes that the world is a fine place to live. In an interview with Comicsbeat.com, Mr Soule describes Wizord’s road to Damascus, using more contemporary terms:

“I sometimes call Curse Words a “reverse Breaking Bad” – Wizord was an absolute, irredeemable monster, who just decides one day that he’s not anymore. Is that possible? Can that actually work?”

Rrather than work to destroy or conquer the planet, Wizord opts to settle down and use the magic the character possesses to bring about wealth and power. Wizord opens the series in a mise-en-scene moment, granting a fading hip hop performer a wish by turning the man into titanium. Wizord has three rules for casting spells, namely nothing involving cures, wars, or love. The only individual that knows Wizord’s secret is a talking animal. Originally in the form of a rat, the creature that Wizord named Margaret has assumed the shape of a talking koala with its own Internet fan following.

Wizards are often responsible for sending young heroes on quests like the altruistic wizard Gandalf for various hobbits (in J.R. Tolkein’s Lord of the Rings books) or the retired master Obi-Wan Kenobi prodding the young and potentially potent Luke Skywalker (in the Star Wars motion pictures). In Curse Words, the wizard had a mission he just decided to forget about after seeing the Earth for a bit and deciding he liked the place. In the fantasy genre, most of the characters are archetypes, in which they play a particular role without variation. So in that regard, Wizord is quite different. Much of the series is meant to be humorous, such that Wizord wears a blatantly fake beard when his magic is stolen and his real one falls out. If Wizord is on a quest, it may just be a personal one of self-discovery as he tries to become a better person.

This premise of a half-baked epiphany by itself could lead to a lighthearted series if nothing else, but Mr. Soule has other plans. Wizord did not come to Earth on the character’s own volition. Wizord has a master in the character’s home dimension of the Hole World, a magical warlord named Sizzajee. Sizzajee has other minions and will gladly send those characters to deal with the traitor Wizord. As Wizord seems mostly content to just make money selling wishes while presenting a public face of a friendly sorcerer, the first time Wizord needs to deal with a former compatriot, the resulting battle does end with the one-time associate dead, but Wizord committed the act in the middle of a crowded baseball stadium. Panicking, Wizord reduces the stadium and everyone inside of it to a small size, carrying the stadium and all the people inside frozen in time away in the sorcerer’s pocket. Wizord likewise froze and shrank anyone watching the game on television. Margaret, as a voice of reason, asks why Wizord did not simply explain the truth. The idea had not occurred to Wizord. Wizord does attempt to make things up for the now tiny people that apparently the character cannot return to normal by building them a mystical paradise land to live in inside a bottle.

It is at that point that Sizzajee separates Wizord from the magician’s connection to magic, causing Wizord’s distinctive long beard to fall off. To make matters more interesting, Sizzajee has another minion lined up to kill Wizord, Wizord’s onetime lover Ruby Stitch. Wizord will need to find a new source for magic to survive the next attack that is surely coming, and Margaret has a solution: magic can be gleamed from sources that seem magical to many people on Earth. Over time, Wizord will recharge his magical abilities from movies, stage magicians providing a sense of awe and wonder, and even gamblers in a casino all hoping for luck. There are side effects that Wizord seems unaware of. The stage magician can no longer remember any of the tricks he performed the night Wizord came to see him, and all the casinogoers lose their games simultaneously to the one-time sorcerer who has taken to wearing a false beard for reasons that are not particularly well explained.

Mr. Soule has produced a rather amusing series, an intriguing take on modern fantasy. Wizord, with a blatantly ridiculous name, is as much a clumsy oaf as he is an accomplished wizard. The nature of Wizord’s past with Ruby Stitch is gradually unraveled as the story progresses, showing the two were once quite romantically entwined.But what exactly was the cause of the pair’s break-up is not explicitly explored, only that Ruby Stich’s motivation comes less from an evil source, like attempting to bring a demonic magical warlord to power, and more from genuine hurt and heartbreak at the hands of Wizord. Whatever Wizord did, she cannot forgive him for it. The reader is given a glimpse at the end of this first six issue storyarc: Wizord and Ruby Stitch at one time had a baby daughter named Margaret, the same name given to Wizord’s talking companion, and Ruby Stitch is surprised to learn that fact.

Ruby Stitch proves incapable of killing Wizord. And so, Sizzajee cuts Ruby Stitch off from the same magical power that used to power Wizord, making Ruby Stitch just as powerless as Wizord. While Wizord welcomes the freedom to live in the mundane world, Ruby Stitch seems less inclined to enjoy it. And while most of the people Wizord encounters seem inclined to trust him at face value, a French Interpol inspector has no trust for the sorcerer.

The characterization of Wizord is unique. It is clear that Wizord has not put much thought into why he used to be evil and now is not. He is trying to be good but does not seem to know how. At first, he seems more interested in keeping his evil past secret more than he is in being genuinely good. Wizord is mostly glad to be free of his former master, and he seems mostly interested in gathering magic to keep himself alive when more assassins, like Ruby Stitch, show up to kill him. Wizord’s switch in world view seems to come from simply from being separated from Sizzajee. He is happy to be free, a joy Ruby Stitch does not seem to share at first, if indeed she ever will.

The last twist for the initial story arc sets up the possibility that there is something stranger to come. Mr. Soule ends the book with a glimpse of Sizzajee in the Hole World, and the reader finally gets to see the exterior of the dark wizard’s fortress. It would seem the Hole World is the same pocket dimension Wizord created for the victims of his baseball stadium mishap. Indeed, Sizzajee seems to be residing inside the stadium itself. Did Wizord create the very dark evil that sent Wizord to the real world to begin with? Is that why Sizzajee seems to intent to destroy, rather than conquer, the Earth? These intriguing questions are set up well by Mr. Soule and are well worth a look to any fan of the fantasy genre looking for a new approach to an old story trope. The series had a lot of potential, and there is a lot that has not been explained yet that readers enjoy discovering.