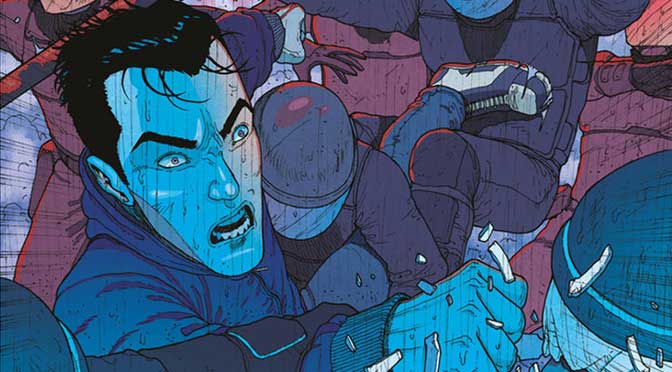 Generation Gone is a new series from American publisher Image comics. Like many contemporary works from both Image and the larger American comics industry, the series’s pitch draws attention to its cinematic influences. The first issue’s solicitation promises a mix between the grounded superheroics of director M. Night Shyamalan’s Unbreakable and the heightened teenage drama of the UK television series Skins (produced by Company Pictures).

Interestingly, the solicitation leaves out a more primary influence, one that writer Aleš Kot cites in an interview with Vulture: Japanese creator Katsuhiro Otomo’s manga Akira. As with Mr Otomo’s work, Mr Kot’s series uses rebellious, superpowered teenagers and their collapsing society as a commentary on contemporary youth.

Though set in roughly the same year as Akira, Generation Gone’s vision of the year 2020 is a more grounded take on contemporary America, a world where the three teenaged main characters feel powerless. In an attempt to take control, they begin hacking into government databases, planning to ultimately gain access to a bank for money. Each character has their own motivation for the heist. Ellena, drowning under the weight of two dead-end jobs, hopes to use the money to pay for her mother’s medical expenses. Nick, Elena’s boyfriend, is interested in the thrill and personal glory. Baldwin, their friend, organizes the hack as a way to attack the system, angered over the increasing acts of racial violence across the country.

Their plan is intercepted by Akio, a scientist working begrudgingly for the US Government. Akio seizes the opportunity to test Project Utopia, his brain-child designed to give superhuman abilities for the purpose of creating super-soldiers. During their hack, Akio exposes them to a computer code that alters their DNA, granting them each different abilities. As the three grapple with their new powers, tensions between them increase as the government attempts their capture and Akio puts his own plans in motion.

Though much happens in the first two issues, the characters are the real focus of the story by this point. The first issue particularly capitalizes on its longer page count to punctuate the expository scenes with wordless vignettes that show the characters’ daily routines leading up to their heist. Nick eats with his family in uncomfortable silence, grieving over the death of Nick’s brother, Baldwin reads about racially violence with disgust, and Elena collapses from exhaustion following work.  Their powers continue to reinforce their individual personalities, manifesting as a kind of wish fulfillment: Elena’s ability to fly reflects a freedom from her responsibilities and Nick’s invulnerability is a sign of his increasing detachment and emotional withdrawal.

Along with these solo vignettes, Mr Kot succeeds in playing the characters in clear concert with one another. Elena, the group’s center, keeps intact Baldwin and Nick’s long-standing but deteriorating friendship. Yet her own relationship with Nick becomes more unmanagable as he engages in increasingly controlling and abusive behavior. The strands of these already-frayed relationships continue to wear as the group develops their powers, particularly as Nick resents Elena’s developing confidence. The interpersonal dramas, already boiling by the end of the second issue, feel earned as they develop, no small feat in the writing of teen drama.

While the interplay and exploration of these characters is a successful driving force for the series, shifts in focus to Akio in a government facility are something of a dead end. Issue #1 is especially halting, with Akio’s introduction spent explaining the details of Project Utopia to military higher-ups.  As with most of Mr Kot’s longer expositions, the explanation never quite manages to deserve its space, and the thematic point about these powers, that “we become the stories we tell ourselves” feels drowned out in the rest of Akio’s explanation.

Issue #2 attempts to make Akio a more sympathetic character, using backstory to explain why he would be so eager to experiment on children, but the addition does little for him. More damning are the moments where the character acts as a thematic mouthpiece. “These children are millennials,” Akio at one point says to to his military handler, “Men like you have taken their future away from them. They are getting ready to steal it back.” Perhaps Akio’s side of the narrative will strengthen when he inevitably encounters the main characters, but thus far, his additions are largely distraction from the more compelling main narrative line.

Artist André Lima Araújo brings to Generation Gone the same eye for detail that made Man Plus, a futuristic cyberpunk series from publisher Titan Comics. It is the details that sell the slightly-futuristic America, a setting only three years away from the present. Yet Mr Araújo renders it as a place near an exhaustive collapse: rooms are covered in cracks and grime and spare computer parts while billboards are tattered along the streets. A piece of grafitti reads, matter-of-factly, “You Killed the Future.” The details of this setting are the most effective sell of the listless ennui that hangs over the series.

Generation Gone, despite some of its narrative missteps, manages to synthesize some of the strongest aspects of its many influences. As future issues suggest a rapid climb in conflict, the strong characterization and sense of drama in these first issues have proven a strong step in the right direction.