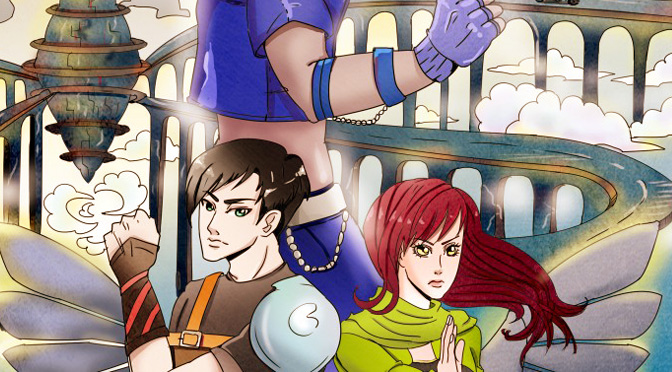 Despite originating in Michigan, this 163 page epic comic book is decidedly very manga in style and themes.

Hidden amidst the extended action scenes is an intriguing story of stealthy revolution and revenge. Emeni is a girl who has had very special training – she is a mercenary trained in a variety of martial arts. In perhaps the most memorable sequence in this volume, Emeni is enjoying an ice cream with a friend and waiting for another girl called Carmen (who ends up being critical to the plot). A scoop of ice cream falls off the cone and strikes the ground. As it does, a nearby building explodes. There is some finesse to this juxtaposition which unfortunately is not replicated throughout the balance of the story. Emeni sees a smouldering boy, who we find out later is named Ryu, walking out of the rubble. Ryu is immediately identifiable to Emeni as a person of interest for two reasons: first, because he is engaging in a trick of walking in his own shadow so as to make himself disappear, and second, a distinctive tattoo on his shoulder which suggests that he is part of the mercenary clan hierarchy. The two challenge each other and duel around a fountain before being interrupted by Carmen. During this fight, Emeni reveals her singular motivation in life: an explanation as to why her family have been targeted by the hierarchy of assassins in which they live, and why her grandfather was killed in furtherance of that.

Through the story, in which various characters in what is called the Tournament of Euphoria fight each other for the honorific of being a “condotliero” (a term describing a medieval Papal mercenary but having a new significance in this context) and the mysterious privilege of “perform[ing] for the High”, it is easy to lose sight of Emeni’s goal. She seeks destruction of the process in which she is involved, a dismantling of the hierarchies which have harmed her kin. She appears to exist within the game, one of the crabs in the bucket trying to claw upwards to air. But the truth of it is that she seeks revolution and truth.

It is a solid plot with much promise. But the writer, Ervin Johnson II, has muddled it. It is as if he has begun a fine oil painting and then smeared it with watercolours, the result we suspect of steering the title so as to stay within genre. The overly extended, dialogue-free fight scenes; the manga world building (which seems here to be without anchor – new concepts are repeatedly introduced towards the end of this volume – “Millenarials”, “defectors”, the “Order of Calem” without any context); and the gaming map of levelling up which so often drives manga plots: these all cloud the very respectable essence of the title. This problem becomes more pronounced as the volume reaches its conclusion, when the world-building looks instead like an extended lapse in focus.

The inherent problem with self-publishing is a lack of resources. Mr Johnson has produced what could properly be characterised as an eminently respectable first draft, of quality and promise better than some of the very garbled nonsense which we see churned out by some major publishers. What it requires is the resources to apply editorial discipline, rigorous polish by an objective third party so as to bring out the colours and shine of this, as yet, rough gem.