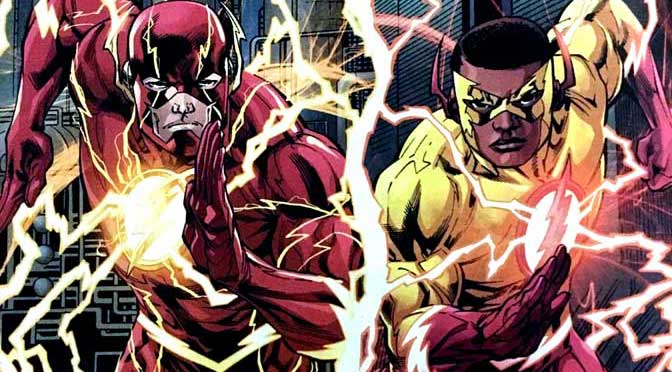 This particular issue of “The Flash” is touted on the cover as the jumping-on point for a new storyline in the ongoing superhero series, entitled “Sins of the Father”. This plot springboard should be an opportunity for new readers to become engaged in the title and its characters.

Despite the dated branding, “The Flash” is an interesting concept. The title is concerned with a superhero who can move at the speed of light by accessing an interdimensional power course called “the Speed Force”. The Flash has been in existence, albeit with significant iterative variations, since 1940. Various characters have held the role.

It should require finesse to write about a character which can move as fast as a beam of light, but in a way which is relatable to the reader. As writer Alan Moore noted in DC Comics’ title “Swamp Thing” #24 (1984), the Flash should be “a man who moves so fast that his life is an endless gallery of statues”. Most writers seem to ignore the fundamentally surreal premise of this unique perspective of time, favouring soap operatic drama. That has occurred here.

In this issue, the opening sequence is a literal nightmare whereby a boy currently holding the role of “Kid Flash” (a child companion to the Flash with nascent super-speed abilities) envisages his father as a murderous demon (actually, a super villain called “The Reverse Flash”). That leads to a tense family discussion which is difficult to follow but seems to involve jealousy by the boy of his mother’s new relationship. From there, Kid Flash and Flash break into a government prison in Louisiana called Belle Reve, looking for the boy’s father. After disassembling the high technology armour of two guards, the characters are confronted by the formidable Amanda Waller, the leader of the covert government agency called the Suicide Squad (which has its own monthly title).

Waller denies being in possession of the Reverse Flash. This then leads the characters to the Australian outback, where the government-licensed thug called Captain Boomerang is on a heavy-handed mission to infiltrate a criminal cartel. The thinking is that Boomerang will be able to verify Waller’s claim. After a confrontation, all three characters are captured in an electric web of some description by members of the cartel.

The first observation we have is that there is a superabundance of Flashes. There is the Flash, Kid Flash, and Reverse Flash. Just to make matters confusing, there is another Flash appearing in an advertisement for a separate title called “Titans”.

DC Comics have for a long time stripped the uniqueness of this character through creating a battalion of supporting characters with identical powers. It is a pointless convolution, a franchising which diminishes the character’s value.

Second, the storyline is mundane. There is nothing startling at play here. A plot based upon family tension leading to a super villain confrontation sounds like the staple work of any number of American titles from the 1990s or earlier. There is nothing innovative in this script at all.

In 1996, writer Mark Waid co-created an apocalyptic superhero title called “Kingdom Come”. In that story, the Flash constantly moves at the speed of light, or close to it, a red blur perpetually and inexhaustibly intervening in crime and accidents. The character’s perspective on life as an altruistic bundle of photons and magnetic waves would be complex and fascinating. Regrettably, the contrast between the innovation of “Kingdom Come” and this title is stark.