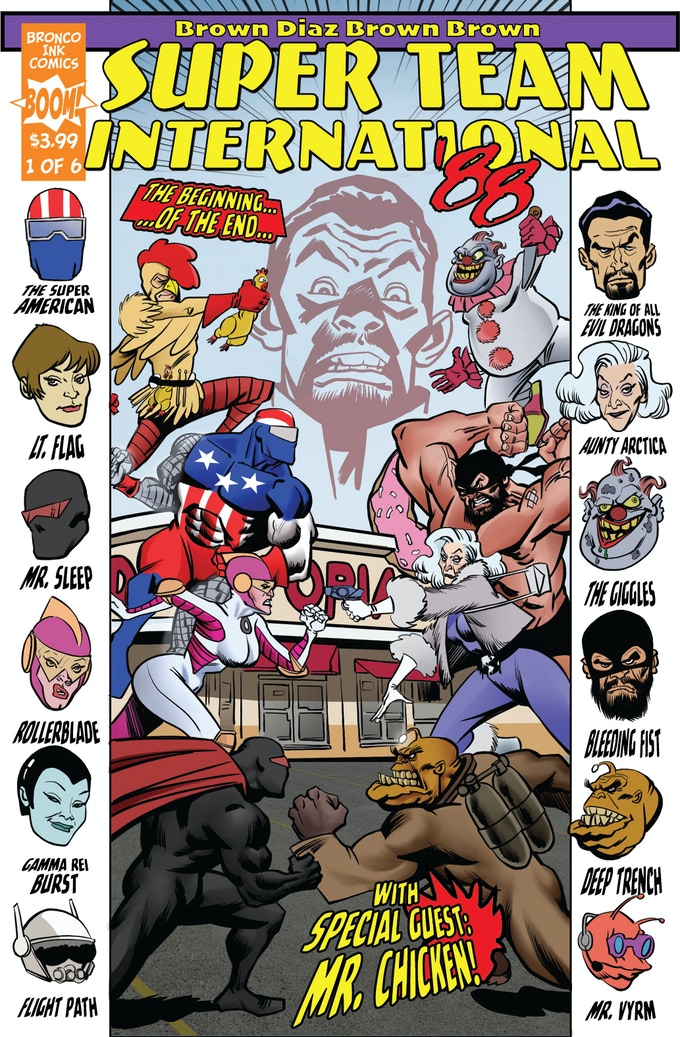 Aficionados of American superhero comic books as the conclusion of what is called the Silver Age of Comics (around 1986) will recognised in this title a key indicia of its theme. The cover art consists of a main dynamic image framed by white columns featuring the disembodied heads of various characters. The heads are each named and they look on, aghast, at the action in the main panel. DC Comics repeatedly deployed this style of cover art during its annual interdimensional team-up between various groups of superheroes. It is plainly nostalgic. This, we are introduced to Super Team International ‘88, written by Scott E. Brown and with art by Carlos Gabriel Diaz.

If the cover art was not clear enough, Mr Brown makes it plain in his introduction: “Forged in the crucible of unpublished, universe shattering crossovers, Super Team International bands together to fight threats domestic and chronological… assuming they stop bickering amongst themselves long enough to slam evil!” Again, for readers of 1980s superhero comics, another jigsaw piece falls into place. Bickering superheroes, the font for the number “‘88” and the use of the word “International” all point towards a homage to Keith Giffen and Kevin Macguire’s Justice League International, a very popular humour / superhero title from DC Comics which ran from the 1989 to 1996.

Other references to 1980s superhero comics are even more obvious. “Somewhere within a bleak and murky swamp deleted by Google Maps” is a giant skull-shaped headquarters for the villains of the play – the swamp and skull base all mimic the Legion of Doom’s headquarters in the cartoon Superfriends. “Cry for Chimera!” is a parody of “Hail Hydra!” from Marvel Comics. As the story progresses we later meet Daniel Garret Coppe, who might be a stand-in for Justice League International’s rich benefactor Maxwell Lord.

Here is the promotional copy:

STI’88 is the story of the World’s Most Mediocre Super Team as they try to rally together to defeat the machinations of VILE. In the first issue, after being forged in the crucible of unpublished, universe shattering, superhero crossovers, the All New SUPER TEAM INTERNATIONAL bands together to stop threats domestic and chronological… assuming they can stop bickering amongst each other long enough to avoid destroying the local donut shop.

The story is anchored in the 1980s, but it is through its humour plainly accessible to a wide audience. The bad guys’ leader, the King of All Evil Dragons, introduces us around the table, including to “Bleeding Fist the Undefeated”, who asks for Band-Aids because his fists are actually bleeding. Dr Pirahna cannot make it and so he sends a portrait of himself to be placed on a chair. The Giggles (a doppelganger for Batman’s nemesis, The Joker) idly pops balloons with an enormous knife while the others squabble about the shape of their plans for world domination. In a moment of bizarre coincidence which seems vaguely like something from Pulp Fiction the aquatic villain Deep Trench walks into the donut shop where the heroes have gathered, in order to purchase coffee for his villainous comrades. When he realises that he has stumbled across a superhero gabfest, he sprints for the rear door.

The jarring element in the story is the torture and death of a captured superhero named Flight Path. The character’s wrists and ankles are bloodily staked to a table, his fingers are sliced off, his face beaten to a pulp, and he is then torn to pieces. There is no humour in that scene at all and we wonder why something so graphically violent was incorporated into a fun parody. The pages seem to be a later bolt-on: we do not know how Flight Path was captured, and he seems to suddenly appear on the meeting room table before he is murdered.

Overall, however, Super Team International ‘88 is a goofy indulgence to those of us old enough to remember Batman knocking out Guy Gardner with “one punch”. As parodies go, it is nostalgic fun.

Issue 2 is presently the subject of a Kickstarter campaign: see https://www.kickstarter.com/projects/broncoinkcomics/super-team-international-88-2