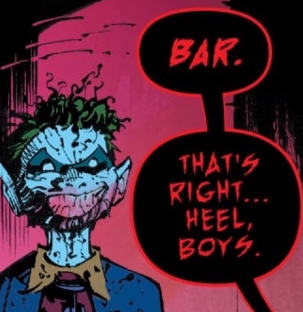 American superhero comic book publisher DC Comics has made some disturbing editorial decisions over recent years. These include:

a. a plot around a weaponised baby, apparently in pain, courtesy of Geoff Johns in Justice League #50 (which we have previously reviewed)

b. the perennial villain, the Joker, having his face carved off and passed about as an evil totem, in Detective Comics #1 (2011) written by Scott Snyder;

c. the Joker skinning a man at a strip club, making him dance, and slapping his bottom, written by Brian Azzarello in the Joker graphic novel of 2008:

This is a track record which does not speak well of DC Comics’ editorial decision-making process. Flaying people and the death and abuse of children are indicia of splatter or slasher films. That genre is deliberately unpleasant and is orientated to a particular demographic. The Joker graphic novel, for its part, was at least expressly an adult themed publication, unlike the other titles listed above.

On 15 November 2017 DC Comics will execute upon its most awful conceptual decision in its publication history. That decision is to publish The Batman Who Laughs #1, involving an alternative universe fusion of the Batman and the character’s arch-enemy, the evil and perverted Joker. This version of Batman resembles a bondage master. The character has chained, deranged boys in Robin costumes grasping at his legs.

The boys are cannibals, and their propensity for savagery is depicted in detail in the comic:

This is evidently meant to be some sort of extension of the occasional observation, or quip,  that Batman, through his various teen sidekicks, recruits child soldiers. Here the various iterations of Robin are taken to their extreme.

The cannibalism, while horrible, is not the issue. The problem with this concept is that the Robins are bound in chains, mentally unstable, and apparently in a coerced, dependant sexual relationship with Batman. The very strong suggestion from these previewed panels is that this version of Batman has child prostitutes who he might have has taught to murder people with their teeth.

The website for Anti-Slavery provides a definition for child slavery. This includes:

1. Children used by others for profit, often through violence, abuse and threats, in prostitution or pornography, forced begging, petty crime and the drug trade
2. Children forced to take part in armed conflicts

Both aspects of the definition appear to apply here.

These children in their costumes and in their chains look coerced. By reason of their age, in addition to being mentally unfit, the boys cannot make a choice on their horrific actions. They are not portrayed sympathetically: there is no consideration of the vileness and perversity of sexual slavery. The boys are not plainly miserable as a consequence of their conditions. Instead, the boys are mindless, grinning villains. There is a subtext of approval. Where a rape relationship is depicted as consensual or enjoyed by the victim, the depiction shifts from being rape to rape fantasy.

This conclusion is not driven by any sort of proselytising religious belief. It is not ordinarily our role to preach about comic book editorial ethics. Gore and violence, a staple of the superhero genre, are a very often necessary to a plot. Brutal violence in superhero comics is something we have even applauded in other reviews. Our website’s raison d’etre is assessment of the literary quality of comic books.

But by any measure, DC Comics has made a terrible error of judgement in pursuing this particular storyline. Making child slavery and the sexual servitude of young boys the unsympathetic subject matter of a superhero comic is not a right decision. The role of the editor is to make the call on whether a plot or plot element is acceptable or not. We are compelled to make this call: the moral compass of the editorial staff at DC Comics is manifestly off-kilter.