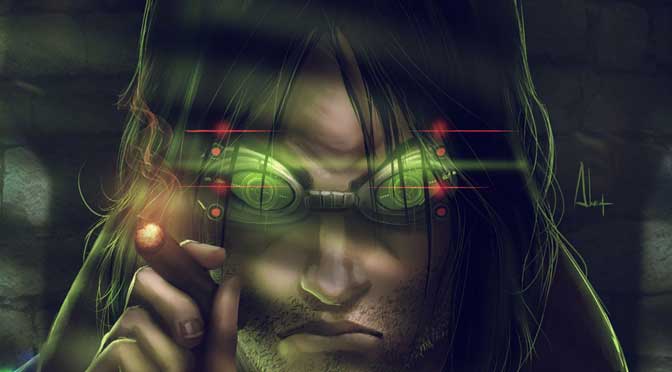 We have previously reviewed Mark London’s work, “Honor and Curse” #1. This is another title from the vivid imagination of Mr London.

That 1980s genre of science fiction called “cyberpunk” which now seems a little out of date. This is because we are living in a post-cyberpunk future. Many of the things which cyberpunk anticipated – the Internet, biomechanical implants and the rise of biotechnology, augmented and virtual realities, the rise of artificial intelligence, hacking, the paramountcy of IT corporations – are now commonplace. Real life overtook the genre.

But this is a cyberpunk story. Set in Detroit in 2055, two young lovers named Andrew Teenier and Jennifer Sanson, students at Mary Grove College, are parked in a classic ’57 Chevy. They are chillingly eviscerated by a taloned stalker.

The story cuts to a long-haired police detective named Aiden McCormack. He sits in a bar drinking obscure Scottish liquor. Aiden is a cypher, a melange of clichéd anti-hero indicia: alone, brooding, even wearing a trenchcoat. A somewhat promiscuous woman sidles up to him, leading to the explanation of what he does for a living:

“The Penrose interpretation successfully bridges the gap between general relativity and quantum mechanics… the key lies in a Planck mass worth of matter and how wave functions change in behaviour at this critical point.“

The Penrose interpretation is about, amongst other things, how observers do not affect the outcome. (Is this Mr London mocking his readership?) Aiden then calculates how likely he is to have sex with his underdressed, newfound companion. The scene cuts to rough foreplay in a disgusting bar toilet. Abruptly, Aiden’s erstwhile date slaps him and stalks out of the stall. Aiden, it seems, has “outdated prosthetics”, and this is a turn-off to what until that point we had assumed is a prostitute. “Outdated prosthetics” is not a euphemism: it apparently refers to an old bionic hand. William Gibson’s 1984 classic cyberpunk story Neuromancer casts its seedy shadow into the title at this point. The episode reminds us of Ratz, the one-handed German bartender in Chiba, Japan, who tends to his duties with an army surplus arm while tolerating prostitution for a cut of the profits. From Neuromancer:

“The bartender’s smile widened. His ugliness was the stuff of legend. In an age of affordable beauty, there was something heraldic about his lack of it. The antique arm whined as he reached for another mug. It was a Russian military prosthesis, a seven-function force-feedback manipulator, cased in grubby pink plastic. “You are too much the artiste, Herr Case.” Ratz grunted; the sound served him as laughter.”

The bar, the arm, the prostitute, all evoke Gibson’s vision of a grubby future.

The arm however is not all that is interesting about Aiden. As the woman walks away, inner voices argue with Aiden. He refers to them as “imaginary friends”, but a photograph of uniformed team of soldiers suggests that the voices belonged to real people. When Aiden’s boss, Chief Cooper asks, “What’s on your mind, Aiden?” one of the voices mutters, “You don’t want to know what’s on his mind.” It is a creepy, snide remark from a bodiless entity.

The voices hound him and taunt Aiden. “Isn’t your mission, your obsession, to give a sense of security to the people of Detroit?” sneers one of the voices when Aiden declines a high profile kidnapping assignment. Richard Morgan’s cyberpunk book Altered Carbon relies upon the concept of ”the mighty altered-carbon technologies of data storage and retrieval” to digitise the elements of a human personality. Is that is what has happened here? Or is Aiden simply deranged as a consequence of some military-orientated trauma?

Aiden accepts the assignment when one of the voices promises him that it could be an interesting riddle to solve. The voice clearly understands Aiden well enough to know which buttons to press. Aiden then uses body language to solve the crime with inhuman velocity. In many ways, this is reminiscent of Warren Ellis’ work on the comic book title Steven Spector, in which the protagonist is a hyper-intellect who solves crimes from the smallest of indicia, his brain fuelled by a sub-lethal dose of pharmaceuticals – in its own way, a descendent of cyberpunk. But further, the voices appear to be more human than the emotionally-detached Aiden. If they are artificial intelligences lurking in Aiden’s head, then they are humanist creations capable of empathy, whereas Aiden is not. Aiden is the problem-solving machine, and the voices are his conscience.

Aiden prefers old technologies, including the use of “vintage specs”, a set of night googles, which also seems to nod to Neuromancer. What is now advanced will become outdated in a dystopian future of high technology, and only used by those who do not trust new things or cannot afford new things.

The murders are perpetrated by a serial killer, who leaves a triangle cut into the skin of his victims, and it seems his face is revealed at the conclusion of this first issue. Aiden’s assessment of a crime scene, “the smell of gasoline and blood is part of a brutal equation”, is put elegantly and coldly, a typical display of Mr London’s honed writing style.

This story is filled with clichés, but cyberpunk is now nothing but a series of concepts which have become clichés. Cyberpunk is however written with the intention of disturbing the reader with a future which is too similar to the present. It is the “dead channel” of the opening page of Neuromancer. Mr London commendably continues that tradition, and none of it seems to be even remotely out of date.