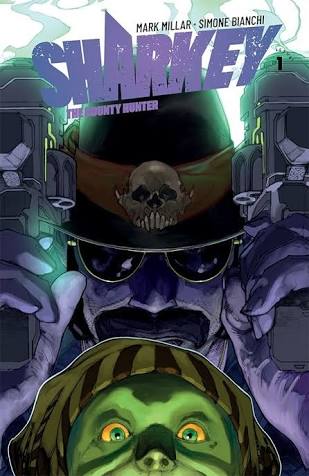 On 7 August 2017 the television production and broadcasting company Netflix purchased a company called MillarWorld Limited. MillarWorld was the corporate vehicle for the creativity of a Scottish comic book writer named Mark Millar, of whom we have written many times previously. The terms of the acquisition are unknown.

The reason for this acquisition was no doubt that many of MillarWorld’s comic book titles had been transitioned into motion pictures of varying success. These are:

1. Wanted;2. Kick-Ass and its sequel; and3. the two Kingsmen motion pictures.

From MillarWorld, but published by Image Comics, Mr Miller delivers to us a new science fiction title, Sharkey the Bounty Hunter. Mr Millar has noted in media press that a Netflix screenplay for this comic is in the works.

Here is the concept:

1. The main character is a tough, extraterrestrial bounty hunter, with a handlebar moustache, and a penchant for biker cowboy attire;
2. The bounty hunter has a penchant for violence, alcohol, and sex, and is in a rivalry with a fellow bounty hunter;
3. The title includes some (literal) toilet humour.

This should be familiar to many DC Comics’ readers. Anti-hero Lobo is been in publication since 1983. The character has endured changes over the years, but the essence of Lobo’s black humour and propensity for chaos is photocopied by Mr Millar’s character Sharkey.

Lobo is reportedly scheduled for an appearance  in the television series Krypton. Approximately a decade ago British director Guy Ritchie was pegged to make a movie out of the character, and last year American director Michael Bay was similarly linked to a Lobo movie.

We have shifted our view on Mr Millar’s creativity since our critique of Empress back in 2016. Mr Millar’s propensity for rejigging dormant (or imminently mainstream) concepts with potential is something we have much more recently discussed. It seems to us however that MillarWorld is more refined than that: it mines existing comic book properties with potential and then, avoiding intellectual property barriers, repackages them for delivery through multiple media channels, with the assistance of Netflix’s considerable resources.

The story in this first issue is very straightforward. Sharkey captures a criminal with the ability to split himself into multiple small replicants, causing havoc within a bar in the process, and secures a paltry bounty. He is offered an enormously lucrative bounty to collect. The offspring of the alien criminal tweaks at Sharkey’s heartstrings, and, eventually, guilts Sharkey into a lift home. In the meantime, a cunning and well-resourced adversary, having just scored a bounty to enable him to take a year off, nonetheless decides out of spite to compete with Sharkey for this next big score.

Mr Millar has an ear for witty banter and this first issue is laced with it. But it is not enough to save this comic from being little more than lukewarm fun. Lobo at least is a self-mocking parody. Sharkey the Bounty Hunter will leave a reader his or her shrugging shoulders.