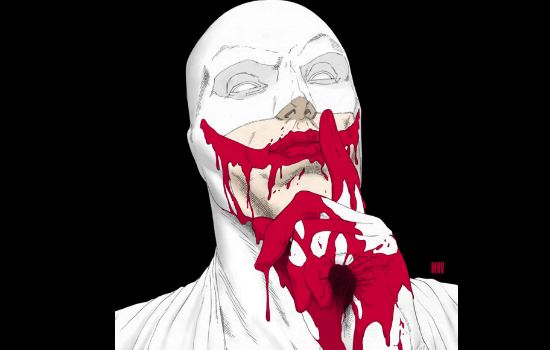 May – December 2010, Icon Comics (an imprint of Marvel Comics)

Mark Millar and Steve McNiven’s comic book Nemesis is, after four years of talk, being turned into a motion picture. Here is a synopsis from website Collider -https://collider.com/nemesis-movie-henry-joost-ariel-schulman-emerald-fennell/ :

Hot off directing Project Power for Netflix, Henry Joost and Ariel Schulman have signed on to direct the sci-fi action thriller Nemesis for Warner Bros., Collider has exclusively learned.

Based on the comic series by Mark Millar and Steve McNiven, the premise is downright juicy. The story follows an idealistic tech inventor whose world comes crashing down when he is framed for his wife’s murder and he discovers the deeply rooted, duplicitous power structure that courses through the most powerful country in the world. Amidst his anger and pain, he is recruited by a masked vigilante known as Nemesis who is determined to take down the corrupt system that has burned him in the same way it has the protagonist.

The comic, now ten years old, is nothing like that at all. Instead, as Wikipedia notes, “The publicity was launched in October 2009, with a teaser image containing the caption “What if Batman was the Joker?” and in a subsequent interview Millar revealed that was only one of a number of possible lines they went with, his favourite being “What if Batman was a total cunt?”[3]“

As Batman wears dark colours and looms in the shadows, Nemesis wears all white and seeks the spotlight. An early promotional advertisement for the title features Nemesis looking remarkably like DC Comics’ property The Joker (see our cover image). This was pulled after what writer Mark Millar described as an informal chat by telephone with an unnamed person at DC Comics. There is some irony to that. In 2017 DC Comics introduced a Nemesis-esque villain called The Batman Who Laughs: an inter-dimensional version of Batman who has been infected with a poison called Joker toxin, and has lost his moral compass. There is not too much daylight between Nemesis and The Batman Who Laughs.

Nemesis had a nihilistic, warped sense of humour, much in line with the Joker’s murderous frivolity. The character kidnaps the children of the protagonist, Washington DC police chief Blake Morrow, but releases the children but he has artificially inseminated Morrow’s daughter with his gay son’s sperm, with her womb rigged to collapse in the event of an attempted abortion – an unlikely thing to occur, as Morrow is a devout Catholic. The stunt is devised to humiliate Morrow, who, in order to secure the release of his children, has to confess to his men that he is sexually incompetent. (At the conclusion of the title it is revealed that Morrow’s daughter has had triplets.)

But the series is perhaps best known for its gore. Nemesis is first seen concluding his terror campaign of Tokyo, in which he kills the Tokyo police commissioner by tying up up and leaving him in the path of a bullet train. The train later plummets into occupied buildings below.

Nemesis arrives in the US, and captures the President of the United States, after using a heavy machine gun to destroy the windscreen of the cockpit of Air Force One at point-blank range. He then allows the plan to fly into a tunnel, killing hundreds of people. Later, Nemesis kills 20000 people in the Pentagon, using a poison gas.

It is Nemesis’ escape from prison which features the most bloody scenes. It evolves that Nemesis is just as skilled a martial artist as Batman is depicted to be in DC Comics, but with no restraints, rendered with superb dynamism by artist Steve McNiven. Below, each of the lines in the background follow the character’s motion, given the illusion of speed by way of a blurred backdrop:

In a 2011 interview with The Guardian https://www.theguardian.com/film/2011/feb/26/mark-millar-kick-ass-nemesis , Mr Millar explains what he was out to achieve with the title:

“I never set out to upset people,” insists the Glasgow-born Millar. “But I think you should shock people. So many people say, ‘He just sets out to shock deliberately’, but sometimes I think that’s brilliant. If I look at a film or a piece of art, I want to get some kind of reaction. Comics are there to maximise the visual with the minimum amount of words in the most interesting way possible. It’s like newspaper headlines done by novelists, essentially. Good political cartoons clip it down to a good visual and an interesting couple of words. And sometimes you have to get a wee shock to do that.”

The story has some unexplained features:

a. Nemesis is revealed to be a series of bored, rich men, given the role, equipment and training by a nameless, bearded mastermind on a faraway beach. How is it that each incarnation of nemesis can be superlative fighters?

b. the mysterious mastermind seems capable of knowing the future. When Morrow and his family are on a vacation, a waiter brings a bottle of champagne and a note commending Morrow on both his survival and his moral choices. The waiter observes that the note was left at the resort a decade beforehand. How could the mastermind have known Morrow would survive and indeed, that e would holiday at that particular location? There seems something quite supernatural to this, at odds with the balance of the story.

Nemesis 2 was planned for released in 2012, and which would apparently have explained much of this:

“The sequel is an entirely different beast from the first story. It opens up the world and expands upon everything we’ve seen before with new leads and an entirely new set-up. ‘Nemesis’ was always intended to be a 12-issue story with three four-issue series. Each one is interlinked and builds, but they’re also quite self-contained and work as stories in their own right. The only character who returns from the first volume is the old guy on the beach on the last page of the last issue. You realize that the Nemesis idea, this concept of dressing up and being a super-villain, is basically a holiday for rich guys. A few times a year, these guys take a few weeks away from their multi-national companies and spend a bunch of money to feast upon the poor. It’s the 1% having fun messing up the lives of the 99%.”

“I’ve alluded to the fact that the first Nemesis was an electronics billionaire, and the opening scene of ‘Nemesis 2’ is a funeral,” Millar said. “The funeral is of a world-famous computer genius. He was one of the world’s richest men, he was the original Nemesis. We have a little fun with that, dropping hints on who he really might have been and how his death was covered up. At the service, all these other billionaires are around talking about who’s going to be next in the costume. Who gets the next shot at this in their little secret society? We get a new storyline from that about a father and a twenty-something son, but the story of ‘Nemesis 2’ comes at the concept from a different perspective. The first one was all about people having to deal with a billionaire monster who was terrorizing them. In part two, we flip it around so people can see the inside of this club and how they train for all this to go out and have fun. And part three will be out in 2013, wrapping the whole thing up.”

“In historical context, we’re similar to where we were in the Victorian Age where the masses feared the aristocracy, these men who seemed above the law and who, in some cases, determined how their workers were even going to vote. These fears emerged in pop culture with books like ‘Dracula’ — the idea of a count feasting on the poor, a blood-sucker in the most literal way, and this reflected the revolutionary vibe sweeping across Europe and Russia in particular at the time. In a similar way, I think that attitude has returned now with the gap between rich and poor being wider than it has been for generations. After 80 or 90 years of benevolent capitalism where people like Bruce Wayne or Tony Stark would be viewed as heroes, we now regard these guys a little more suspiciously. How exactly did they make this money and how do they sleep at night in their massive homes when people are sleeping rough on the other side of their electric fence? Can they justify importing 500 designer cowls from Japan when some people can’t feed their families in the neighborhoods they’re protecting? In reality, they probably wouldn’t be very nice at all. Nemesis is taking that idea to a logical conclusion and just being honest about it. This is about rich men putting on masks and capes and getting a kick out of beating up poor people.”

Millar adds, “Did I mention that the series opens with a car driving out of an airplane and landing in a swimming pool?”

But the second story in the trilogy, let alone the last story, have never appeared. We assume Mr Millar is busy with his many other projects – but not including the Nemesis motion picture, which on Twitter he seems to mildly disavowed. On Twitter earlier this month, in respect of the sequel to the comic book, Mr Millar said https://twitter.com/mrmarkmillar/status/1300553050310967296 :