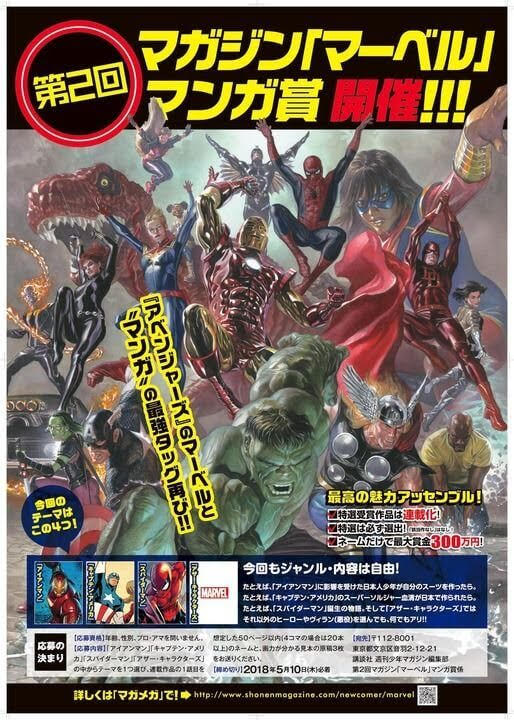 Shonen Magazine (a Kodansha publication) announced on 2 October 2018 that the winner of the second Marvel Manga Awards competition is Yusuke Osawa for his story, “Spider-Man: I’m Not A Hero.” Mr Osawa wines JPY3 million and gets a contract to write and draw the story for Magazine Pocket manga.

Mr Osawa’s previous work includes the dystopian shonen manga Green Worldz, the copy for which reads, “In 2017, the vegetation in Tokyo rose up and toppled human society in moments. The few survivors are forced to live in the relative safety of a subway network, but supplies are running low. Join an average high school student named Akira as he challenges the plants in a struggle for survival!”

Marvel Editor-in-Chief C.B Cebulski noted (translated from English to Japanese, and which we have translated back to English. Apologies for inaccuracies!), “Osawa’s story and character are very well understood. By focusing on Peter Parker, sans his suit, this work represents the balance between the superhero and the man. All of Marvel’s heroes have doubts in their actions and motivations, but he captures the confusion and moral conflicts that Spider-man faces from time to time in his cause.” One of the other judges, Marvel Comics’ Chief Creative Officer Joe Quesada, observed, “It was the best entry in the contest.” The other judge was Hiro Majima, the author of the manga “FAIRY TAIL”

But other entries in the contest were equally compelling: below, an image for a new character called “Venom Boy” (the sound effects reads, “zo-wa, zo-wa”, a shiver or shudder in fear or disgust) –