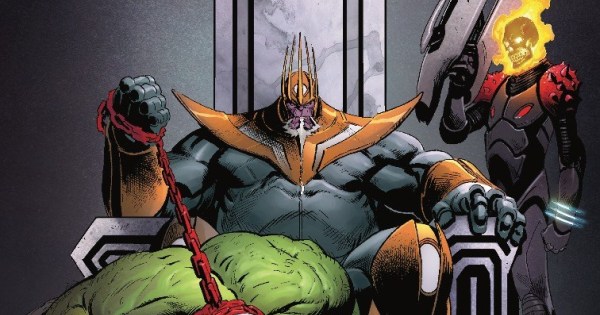 Thanos Wins is a trade paperback that collects issues #13-#18 of the Thanos comic book, which is published by Disney subsidiary Marvel Comics. The story in this collected edition naturally revolves around the titular super villain and his ultimate success in spreading death across the universe. Thanos is currently enjoying a boost in mainstream popularity due to the commercially successful 2018 blockbuster film, Avengers: Infinity War, which cast Thanos as the central villain: the title alludes to Thanos’ apparent victory over the Avengers by the conclusion of the motion picture.

Issues #13 to #18 of the Thanos comic book series is set in a possible future in Marvel Comics’ fictional universe, in which Thanos has killed all living things in the universe, save for a few stragglers, in a perverse attempt to win the heart of the cosmic personification of Death.

Love and Death in Time

The Infinity War movie did not touch on this aspect of the Thanos character. But since his first few appearances in comic book form, Thanos has been characterized as infatuated with Death itself. “Death” in this instance is the being that personifies the concept within Marvel Comics’ shared continuity, but Thanos’ affection manifests as the creation, if that is the correct word, of death. It is a straightforward perversion: by causing rampant death, Thanos believes he appeases his would-be lover.

Time travel is a crutch upon which Marvel Comics leans heavily. In Thanos Wins, the future Thanos has used a character called Ghost Rider (traditionally a motorcycle-riding spirit of vengeance, but who in the this future possesses cosmic powers after being chosen as a herald by the planet-eating Galactus), and a broken piece of an artefact called the Time Stone, to summon present continuity Thanos. Old Thanos needs Present Day Thanos’ strength to defeat the last living being to pose a threat. Dubbed as “The Fallen One,” this mysterious foe is soon revealed as the Silver Surfer. The Silver Surfer is yet another cosmic being – an altruistic former herald of Galactus – and in this future he wields the hammer of Thor, Mjolnir. (Within Marvel Comics’ continuity, only one who is worthy may wield the hammer of Thor and thereby summon the powers of a storm god.)

The disconnect in the premise, as present Thanos correctly deduces, is that Thanos would never ever ask for help, including help from himself. As it turns out, Thanos’ true purpose for summoning his past self is to kill his future self. The bitter endgame for Thanos is that diligently killing every thing in the universe did not lead to Death appearing, let alone falling in love with Thanos. This is because Thanos still needs to do one thing – die. Except, and this is an oddball psychological permutation by any measure, Thanos’ arrogance would not permit death at the hands of anyone save himself.

The resolution to the story may seem like a cop-out for more sophisticated readers. Present Day Thanos refuses to kill his future self, and instead vows to avoid doing the things that will lead to the unsatisfactory future he is witnessing.

Perhaps Marvel Comics cannot be faulted for using the plot decide of the Time Gem to tweak the status quo. If followed to its conclusion, bleak reality rendered in the pages of Thanos Wins would restrict Marvel Comics continuity to a depressing conclusion. Present-day Thanos’ disgust at how pathetic he has become also helps as a functional balance of the character’s tendency to flip-flop between villain and antihero, depending upon the writer and editorial direction of the day. From the perspective of consistent characterisation, readers are offered the explanation that Thanos is indeed evil, but does not want to devolve into his future, suicidal self. (The previous explanation of occasional altruism is that Thanos simply does everything on a whim, regardless of morality or ethics.) This comic, then, is a vehicle for an editorial mandate on the correction of the characterization of a major villain, dressed up as a time travel story.

There are also some bits and pieces to the story that will be amusing to veteran comic book fans – the identity of the cosmic Ghost Rider, the fate of all of Marvel Comics’ large pantheon of super heroes, which heroes are still alive, and other story developments that will not normally occur in the pages of mainstream Marvel Comics’ books.

Of particular note here are scenes of Thanos committing horrible – and gory – acts of torture. Villain or not, a graphic depiction of Thanos viciously disemboweling a female character might be too much for a mainstream comic book. It is only seen as a small flashback image, in a collage of images depicting all the evil deeds that future Thanos has committed. But still.

Ultimately, there is one flaw to Thanos Wins. As shocking as the story purports to be, there is something in the premise that feels awfully familiar for a title from Marvel Comics. Marvel Zombies, Old Man Logan, Hulk: The End, and various other alternate future reality stories have tackled the topic of a future in which evil has won and no superheroes are left (or willing) to fight. This is a very well-worn path. What novelty is there in Thanos Wins that has not already been glimpsed through the crystal ball of time travel? In our view the plot is nothing more than officially-sanctioned fanfiction.

Still, and perhaps remarkably given the assessment we have expressed so far, writer Donny Cates’ talent shines through in dialogue and execution. That is a significant accomplishment given the parameters within which Mr Cates has been given to work. Accordingly, surprisingly, Thanos Wins is a solid read. It will satisfy any habitual genre reader who is not looking for a meaningful addition to Marvel’s long-running shared continuity, but happy to indulge in yet another vision of superhero apocalypse.