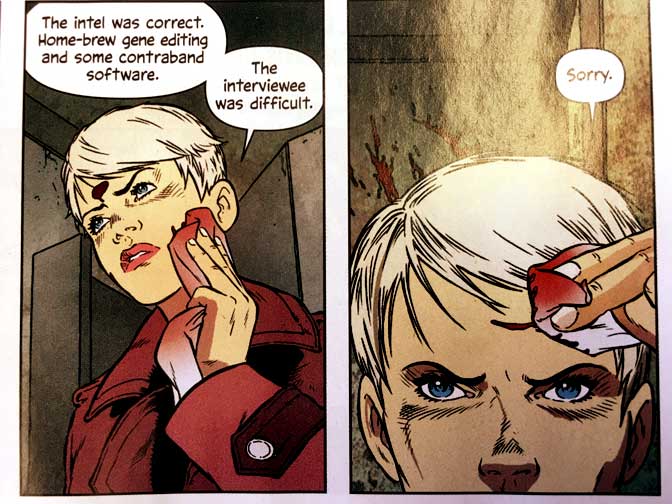 British writer Warren Ellis has been tapped by DC Comics to redevelop the stable of superhero characters which it acquired in 1999 from artist Jim Lee. Mr Lee’s business was known as Wildstorm Comics, and was a bright star in the otherwise dim constellation which was then Image Comics. In 2007-8, Mr Ellis did a similar thing with Marvel Comics’ alternative universe of characters, initially known as “New Universe” when first launched in 1986. But under Mr Ellis’ scalpel the concepts in that comic were re-branded as “New Universal”.

Mr Ellis has long been baffled by the popularity of the superhero genre in America. In his 2001 collection of blog columns entitled “Come in Alone”, he was both frustrated and angry about he state of the American comic book market”. A decade and a half later, despite the surge of mainstream popularity in the superhero genre caused by the success of Marvel Studio’s motion pictures and the television series “The Big Bang Theory”, Mr Ellis still seems to regard the genre as a literary stain.

In this series, the “fetishism” (to use Mr Ellis’ term) of superheroics has been stripped out. Mr Ellis has taken a loose selection of the characters and transplanted them into a science fiction / espionage context.

This is most stark with one of the characters called “Zealot”. Zealot started existence as an underdressed alien elite warrior from the planet Khera, with a plume of long white hair, cheeks striped with red tattoos and forehead marked with a red circle. Zealot was part of a superhero team called “WildC.A.T.S”, one of Mr Lee’s creations.

On the first page of “The Wildstorm” #1, Zealot, with sensible short blonde hair and wearing quite ordinary clothing, has just killed a terrorist in a bathroom. The character’s cheeks and forehead are stained with blood matching the tattoos of the previous incarnation.

The sequence ends with Mr Ellis’ nonchalant shrug to all of that. Zealot is on her phone, reporting to her superiors on the gruesome carnage and lethal outcome. “Sorry,” Zealot says into the telephone, looking into a mirror. The character wipes the distinctive blood pattern from her face. That single word sitting in this panel has two meanings: a flippant summation of the outcome of the fight, and an apology to readers who were expecting a rehash of the old superhero formula. The character is now an intelligence operative with a brutal methodology. The past life of the character is wiped away in the environment of a dirty and blood-smeared toilet block.

There is something of a bait-and-switch in this. Mr Ellis and DC Comics lure readers into the title by using the old names and abilities (the new version of Zealot is still clearly a master of combat). This is best illustrated by looking at two of the other main characters.

Angela Spica, another character with the alias of “The Engineer” and once a mainstay of a superhero team which Mr Ellis created called “The Authority”, is still a steel-clad enhanced cyborg. But instead of a self-assured and even funny super heroine, The Engineer is rebuilt as a flaky scientist who has conducted terrible experiments upon herself. In one scene she is bleeding from an abdominal wound during a deranged conversation with her boss, and there is the clear sense that this was an outcome of self-administered and botched biological enhancements.

The same applies to Voodoo, another character who in the original series was a beautiful bartender made lonely by her ability to transform into an alien monster. But in this iteration, the character is some sort of rock star or media personality, with an offbeat alt-reality world view.

Both The Engineer and Voodoo have small fan bases who might buy this new title having regard to the premise of the reappearance of these characters. Those readers would be potentially disappointed by the ground-up rebuild. The characters each have goodwill and reputation which attracts readers to the title but, unless informed by sources like this review, those readers will not be served what they expect.

The front cover with its numeration suggests that this is a twenty-four issue series. Mr Ellis is a gifted writer, who we have frequently praised, but who regrettably has a short attention span outside of pet projects such as Vertigo Comics’ “Transmetropolitan” (and even then, by Mr Ellis’ own admission in “Come in Alone”, “Transmetropolitan” had occasions where it ground to a halt).

If Mr Ellis can deliver on this title over the next two years, readers should be pleased by the usual quality of Mr Ellis’ writing with its trade mark brutal violence, corporate conspiracies (Halo Corporation, an intrinsic part of “WildC.A.T.S” has returned as a sinister Apple-esque multinational) and psychedelic hues. But readers will not be pleased if seeking Mr Ellis’ fine honed superhero adventures. There are no capes here.