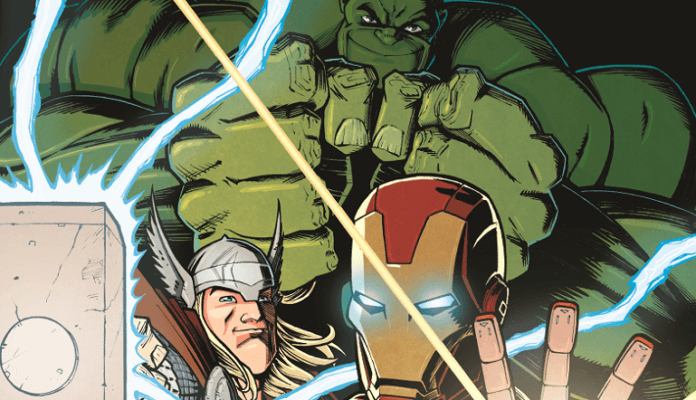 Nostalgia sells. Avengers: Back to Basics is a new digital-only comic book from American publisher Marvel Comics and online distributor Comixology, focusing on a team of superheroes, The Avengers. This property (or, as a team, collection of properties) is currently one of Marvel Comics’ most popular and lucrative properties. Due to the success of the highly successful blockbuster films that leverage the core concept of a mismatched, super powered cast working in unison to fight evil. And so, curiously, Avengers: Back to Basics is not based on the cinematic universe version of the Avengers. Instead, the comic revisits the early adventures of the comic book version of the team of characters.

The story in the comic is set in the past, but is framed by a story set in the present. The narrative frame to the story is seen through the eyes of a young girl named Kamala Khan, who fights crime under the nom de guerre Ms. Marvel. In Marvel Comics’ contemporary continuity, Kamala is a new recruit to the Avengers. In her desire to learn about the history of her new teammates, she is given a virtual reality headset by the android superhero The Vision. This virtual reality headset allows Kamala to revisit The Avengers’ early adventures and experience the events as a passive participant. It is an unimpressive plot vehicle, discussed further below.

The historical event that Kamala first explores involves the early Avengers members Thor, Hulk, and Iron Man. The trio’s adventure involves dead Norse warriors called the Disir, who wish to bring about the end of the world. The heroes get an unlikely tip-off to the Disir’s plans from the supervillain Loki, who is motivated by self-preservation. The first issue ends with a cliffhanger, with the Disir succeeding in the summoning of one of the heralds of the Scandinavian mythological version of the apocalypse, Ragnarok. That herald is the giant wolf-god called Fenris, which in legend eats the moon.

The Back to Basics title is express in its promise. The title is an indicia that the series is anchored in The Avengers comics published during the American Silver Age of Comics (say, 1962 to 1974), when storylines where simpler and less averse to ridiculous plot devices. While the story does feature a hokey cartoonish plot, Mr David, a veteran comic book writer with an impressive curriculum vitae but who has been quiet in his creative output for some time, thankfully avoids the cheesy over-expository dialogue that characterized Silver Age comic books. The comic reads well because of this. It pays tribute to the Avengers’ roots without relying on a dated presentation.

If there is one thing we question, it is the purpose of the framing device. The scenes featuring Kamala in her bedroom, wearing a ridiculous VR headset, add nothing to the story. If it was intended to enable young or new reader to relate to the old characters by having a young and new character serve as both horse and guide, then it fails in its execution. The paltry pages in the beginning of the first issue devoted to Kamala’s interaction with the flashback are a wobbly springboard. Unless the title finds a way to give Kamala a more active role in these revisionist adventures (and we do not know how this might happen), the character’s addition in the title is in our view completely unnecessary.

Barring that minor quibble, Avengers: Back to Basics is a great read for existing Avengers fans, particularly those who desire a new tranche of Avengers stories set apart from the overwhelming cross-promotional campaign for the upcoming Avengers: Infinity War motion picture. It is also a great read for people who want to revisit the early adventures of the Avengers but who might feel, correctly in our view, that the original comic books have aged badly. Ageing comic book readers, those who might have read Silver Age stories in their youths, would at the very least be edging towards retirement, with plenty of time on their hands to explore the fun-filled adventures they enjoyed through the medium of comic books in their childhoods. This title is for that demographic. As we say, nostalgia sells, but in this instance Mr David has been canny enough to shear away the awkward aspects of it.