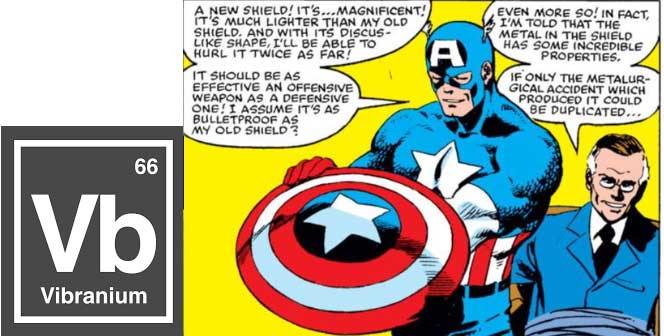 For decades, comic book writers, desiring their audience to engage in a suspension of disbelief, turn to fuzzy chemistry to provide explanations for that which is otherwise inexplicable. These fictional elements fall into three broad categories. The first category is that the metals enhance the powers and abilities of various characters by being the metal used in weapons or armour. The second category is that the metals are a fuel or propellant of some kind or another. The final category, particular to the Superman mythos, is that it is a cause of fatal weakness.

We have listed below some of the more prominent fictional metals to be found in comics. There are others (“cavorite”, for example, which plays a major role in Alan Moore’s League of Extraordinary Gentlemen, but which has its origins in the 1901 novel The First Men in the Moon by H. G. Wells, was a late exclusion). Let us know if you think we have notable omissions.

1. Adamantium (and Carbonadium) – Marvel Comics. First appearance: Avengers #66 (July 1969), an indestructible alloy which most famously laces Wolverine’s skeleton and claws (the barely sub-lethal process of which is illustrated above), and forms the outer shell of the killer robot, Ultron.

2. Nth Metal (and Valorium). DC Comics. First appearance: Flash Comics #1 (January 1940) This substance was used to explain the ability of Hawkman to fly. The character’s wings are said to be made of the substance. In the title Legion of Superheroes, set in the far future, this superhero team’s characters all wear a “Legion flight ring”, which is supposedly made of a derivative of Nth metal, enabling them all to fly. More recently, it has been portrayed as having healing properties.

3. Vibranium: Marvel Comics. First appearance: Daredevil #13 (February 1966). This is the substance which makes up Captain America’s indestructible shield, and also Black Panther’s suit. It absorbs all forms of kinetic energy (and from time to time has been shown to absorb heat, too). Below, Captain America receives his vibranium shield from US President Franklin Roosevelt.

4. Uru: Marvel Comics. First appearance: Journey Into Mystery #83 (August 1962). A highly immalleable metal, the most famous example of it is the enchanted hammer, Mjolnir, wielded by the God of Thunder, Thor. It is also described as having a natural affinity to magic.

5. Bombastium: Dell Comics. Uncle Scrooge #17 (March-May 1957) A recurring feature in Donald Duck comics, Bombastium is the rarest element in the world, and has odd properties. One atom of bombastium dropped into a barrel of water becomes one barrel of ice cream – and a different flavour of ice cream each time. To avoid evaporation, bombastium must be kept frozen, as demonstrated below.

6. Kryptonite: DC Comics. First appearance: Superman #61 (November 1949). Fragments of rock from the exploded planet Krypton have made their way with remarkable frequency to Earth. Known as Kryptonite, the mineral can very quickly fatally irradiate Kryptonians. There are several wacky variations to Kryptonite, as noted in the chart below.

7. Orichalcum: Shueisha. First appearance: Black Cat Chapter 42. A sword named “Christ” is used by Sephiria Arks, an expert swordfighter of the elite group of assassins called the Chronos numbers, appearing in the manga Black Cat. The sword is made from orichalcum, described as one of the strongest metals in existence. The black, almost indestructible metal was also used to forge bullets and can be drawn out into razor sharp wire.