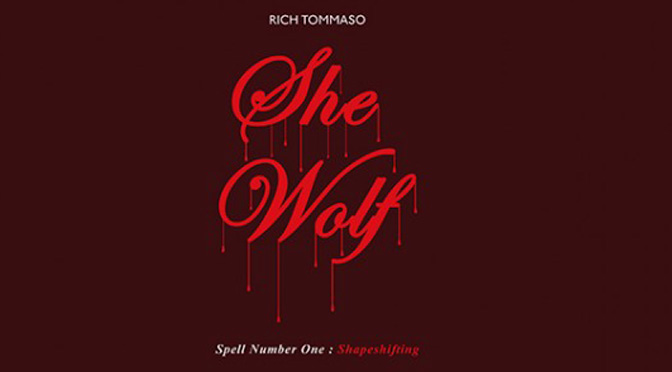 This comic is something more than a suburban tale of teenage witchcraft, but it is hard to define what that advancement on such a well-worked concept is.

“She Wolf” is a story about a teenager living near a place called Tomahawk Lake and attending Sparta High School. The North American location is not otherwise described but it is all suggestive of a semi-rural location, an ordinary American town located near the woods. The teenager, Gabby, bears scars down her face. These are apparently the consequence of being raked by a werewolf named Brian, a classmate.

It seems as if Gabby might have been responsible for Brian’s transformation but it is not clear. The text is riddled with visions and dreams and it is difficult to divine what exactly is going on. Even on multiple reads the plot is not obvious, and nor is the sequence. There are flash-forwards and jumps which make the text very confusing. This is either an inspired work in that the text is meant to represent Gabby’s fractured perspective on reality, or the author, Rich Tommaso, needs more editorial structure to his work. In other words, this is either brilliant and incoherent, alternatively, amateur and flawed. We cannot say which, but we suspect and hope the former over the latter.

There are some intriguing elements to the delivery of the story. Gabby is able to see on one occasion what her school principal is actually thinking and the message he would prefer to be communicating: a black and red shadow leans out of his human form and spews threats and blame at Gabby, while the man himself otherwise blathers and placates in his role as an administrator, unable by the strictures of reasonableness and protocol to speak his mind. The black spectre is either his innermost thoughts or his id. There are also some scenes which leap out of nowhere featuring Gabby running through the forest in a red hood and cape, associated with the words or identity, “Bloody Mary”. A story about a wolf is easily linked to the fairy tale “Red Riding Hood”. The sequence ends with Gabby caught chanting at a mirror and scaring her waking sister – Gabby sprints out of her sister’s room like a fugitive. The event winds down into a threat not to go to the beach and the response of an insolent teen: “Okaaaay.”

It is not at all clear what is happening or where this is going. The work reads as a bundle of tangents loosely gathered in a quiver. It is vaguely reminiscent of David Mack’s revolutionary work on “Kabuki” (Caliber Press / Image Comics / Icon Comics): less polished, less coherent, but just as innovative. Unless, of course, we are reading too much into this title, trying in hope to see James Joyce’s “Ulysses”, but it is instead simply incoherent. Perhaps the fundamental flaw with this first issue is that if Mr Tommaso is actually a genius then he has left us in doubt as to the truth of that genius.