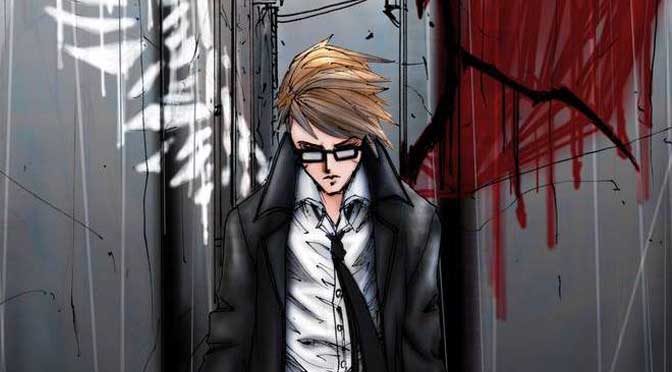 As we have previously discussed, DC Comics’ horror and fantasy imprint, Vertigo Comics, seems to have substantially lost its way (with the exception of Gail Simone’s “Clean Room”, which we have previously discussed). In so far as Vertigo Comics needs new blood, here is a very rich transfusion source, written by newcomer Tyler Carpenter. Indeed, “Demons” 1-2 features blood in quarts.

The story begins with a man in a suit chasing a hooded figure through the night. Overlaying the images of the chase are text boxes, recounting the Book of Genesis and detailing the tasks that God went through in creating the world. The suited man shouts warnings, and then fires a gun. As the recantation of Genesis recites the creation of man, we see that the hooded figure is a winged demon, dead, covered in blood, and lying on a footpath in the park. We then read Genesis 2.2: ”And on the seventh day God ended his work which he had made, and rested from his labors.” The combination of the image of the slain demon and the text makes it clear that the corpse is not God’s handiwork. “What in the hell are you and where the hell did you come from?” asks the shooter to the dead monster. The black shadow of a cross looms over the demon. This multiplicity of symbology and text sends a very direct message. The writer, Tyler Carpenter, navigates this well, ensuring that this tightly packed imagery is not too overburdening.

The shooter’s name is Detective Ace Carter. Seeking answers to the question of the demon’s existence, he attends a church and questions the priest in respect of the demon’s identity. “I normally don’t believe in this mumbo jumbo but I figured you could take a look at it,” says Carter. Carter is clearly very dismissive of the priest’s faith. The priest examines the photograph, and, overwhelmed, is forced into a chair. He reveals to Carter the story of why he became a priest. It is clear that the priest knows Carter and his family well: the priest and Carter’s uncle, while camping on a mountain, were ambushed and torn to pieces. All save the priest were killed. “They had brought me to my knees.. I knew I was about to die.” The flashback depicts a hooded man, a pentagram etched onto his gown, holding a knife above the priest’s head. “He began chanting about a portal. A door and a sacrifice.” But the would-be murderer is abruptly shot dead. The intervention of a cadre of mysterious soldiers, their chests emblazoned with the insignia “F-666”, save the priest’s life. “They wouldn’t tell me who they were or how they knew I was there. They wouldn’t tell me who those people were, either.” But the priest looks back at the corpses of his captors, and sees that they have been transformed into demons.

The priest asserts that God saved him from being murdered. Carter protests and says responsibility lies with the soldiers, and not with holy intervention. The priest quotes, “And he that overcometh and keepeth my works unto the end, to him will I give the power over the nations. “ We are not told by Mr Carpenter nor his characters, but this is a quotation from the Book of Revelations 2:26, notorious as the New Testament’s prophecy of the apocalypse. “What is that?” asks Carter, and the priest replies, “Something for you to think about.” Carter views this as a taunt. “Thanks, Dad…” he mutters, leaving. Only at this stage is it revealed that the priest is Carter’s father, the unseen twist closing out the scene. It is very well-executed.

Carter returns home and finds that his apartment has been ransacked. Claws have gouged the walls. Carter is the ambushed and savagely attacked by a demon. He manages to fend it off by shooting it in the leg, and it scrams, escaping throw the window, carried away by its wings. There is genuine tension in the combat. It is almost completely devoid of dialogue: there is no “combat pontification” (for want of a better term of that rodent-like plot filler of superhero comics) at all. It is clear that Carter is fighting for his life.

The dialogue is sparse and clean, and the plot unrolled with engaging excitement and genuine surprises. The repeated reference to religion provides a familiar semiotic landscape to most readers, and the inclusion of the mysterious soldiers draw upon the familiar conspiracy mythos of a secret Church military wing. There is overt tension between the believer of a Christian God, and the non-believer, which is usually lightly skipped over in horror comics given to devils and hells. It is a fine opening issue by Mr Carter, far better than most.

Issue 2 is slightly weaker. It opens with Carter’s father, named James, staring at a photo of himself and his missing wife, Beth. James meanders out of his church to find Ace unconscious and bleeding on the steps. Mr Carpenter then resumes the action: Carter has followed the blood trail of the flying demon who was ransacking his apartment to an abandoned house. To his surprise, there is a map, and a photograph of his mother, her image circled in red. Carter follows sounds upstairs. He overhears tense, muttered discussion, apparently between the shot demon and his master. Their plan sounds grim: “Using the three chosen locations, we offer three sacrifices to the fallen angel and unleash the powers of hell upon the earth.”

But overhead, unbeknown to both the eavesdropping Carter and the demons, is a helicopter. Rappelling from the skids are three soldiers, led by a woman identified in dialogue as “Agent Waters”. The soldiers smash through the roof of the abandoned house, and bullets fly everywhere. Carter finds himself fighting for his life against one demon. Carter’s weapon is battered from his hand, and he is knocked through a window. Wounded, he limps away from the ongoing firefight. In the foreground, we see a machine gun firing at a bat-winged figure. The “Buffy the Vampire Slayer”-esque dialogue is salved by this scene. The battle goes on: Carter’s presence or absence is irrelevant. He is not the hero who saves the day, and is plainly ancillary to the confrontation driving the story. It is a counterintuitive, clever scene.

Carter’s father patches up the battered detective, and the conversation inevitably leads to the discussion of Carter’s mother. The two bark at each other, the priest angry at Carter’s blasphemy, and Carter angry at his father’s evasion. The argument is interrupted by the arrival of Agent Waters and armed companions. She identifies herself as “the leader of a special task force known as “F-666”. She wants to interrogate Carter on what he knows about the demons. Carter will assist – he has stolen the map from the house. It identifies three locations pointing to a central point. James mutters, “The hell beast. The protector of hell’s gates.” Carter’s anger is again triggered: “You know for someone who claims to be just a priest, you sure know a lot about this Dad.”

James explains that a cult calling itself “The Divine” intend to break the chains which lock hell’s portal and release demons upon the earth. The scene shifts: and across town, a ghastly man with a rictus smile gives credence to the story by exclaiming, “My brothers! Tonight we do God’s will!”

Again we have shades of “Buffy the Vampire Slayer”. That 1990s iconic television production featured demon-fighters living in a Californian town called Riverdale, which sat on a source of evil called the Hellmouth. The peril confronting Carter and his associates sounds too familar.

But this is a sole criticism. If excised of the shadow of “Buffy the Vampire Slayer”, Mr Carpenter’s work could easily be a pitch for a television pilot. Any writer can improve his or her skills, and Mr Carpenter’s text has some slightly rough edges which will smooth out with practice. But Vertigo Comics could do worse than sign up this talented writer.