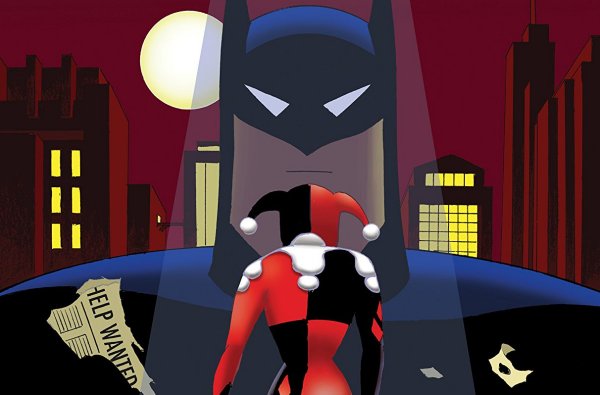 If the character’s name being prioritised over the evergreen Batman brand in the title is a not clear enough indication of that, the story further emphasises the focus by revolving solely on Harley Quinn, with Batman, and ancillary characters Nightwing, Joker, and Poison Ivy, and nameless cops and henchmen, serving as nothing more than dressing for the narrative.

The story is simple enough. Batman and and former sidekick Nightwing, during one of their routine raids on the Joker’s criminal activities, find that every single one of the villain’s many traps and weapons backfire.

The overwhelming failure rate of the Joker’s traps is ridiculous at first. But it evolves that each deathtrap was sabotaged by Harley Quinn. The character, romantically affiliated with the Joker, is motivated by jealousy. It turns out that the villain sidekick is fed up of The Joker’s obsession with the Batman, and so decides to undermine her partner as a twisted (though entirely reasonable given her deteriorated mental state) way of seeking attention.

Unfortunately for Harley Quinn, her scheme not only leads to capture, it also failed spectacularly. The Joker is not angry or even disappointed at the betrayal. Harley Quinn is soon saved by the sudden appearance of another of Batman’s female adversaries, Poison Ivy. This character has been privy to Harley’s plans and does not want her friend to be incarcerated in a mental institution again (in the Batman mythos, Poison Ivy and Harley Quinn are close friends, probably in a sexual relationship, with common cause in criminal acts.)

The decision to pay attention to Harley Quinn’s mounting frustration triggered by romantic neglect, and her insane methods for addressing those feelings, add a unique flavor to an otherwise generic plot. However, in our view, this comic ultimately fails due to an extremely crude, cliched execution. The plot is unnecessarily propelled by grinding dialogue, as the characters explain everything that is happening in the panels. By way of example, we have this droll line: “I can’t control the Big Man, it’s slipping in hot sauce!” exclaims the Joker, trapped inside a malfunctioning robot where no one can hear him. Batman and Nightwing as vehicles for plot execution are even worse offenders. Every single line uttered by either character is either an outdated quip, or yet another unnecessary (and uncharacteristic) explanation of what is going on in the panel. Again: “Joker, No! You’re aiming at your own men!” Batman cries out, apparently surprised that his psychopathic nemesis is willing to sacrifice his own henchmen just to win.

Other reviews are also not flattering. At Comic Bastards, a critique from Dustin Cabeal scathingly concludes, “The Joker wants to stop a BBQ competition in Gotham… What the fuck? That shit might have flown back in the 90s, but seriously, who the hell does DC think is picking up this book? It’s not kids. It’s people in their 30s to 40s that grew up on the show and have nostalgia and money. Even if that is a throwback, it’s still just so dumb that it’s not even funny. What’s greatly disappointing about the story is that it doesn’t realize it’s audience and even by 90s standards would be a bad “episode” of the show”

Repairman Jack at Weird Science also pulls out the stiletto, with this observation: “If I had to give this book any credit it would be that it wasted no time in going completely downhill.” It is a rare day that we find ourselves less ardent than our peers in pointing out dubious quality.

The story is written like a children’s story (probably intentionally). But it tackles an adult subject matter. Ty Templeton, the writer, is a seasoned comic book veteran. This title is therefore surprising in its cartwheeling, unwieldly execution.