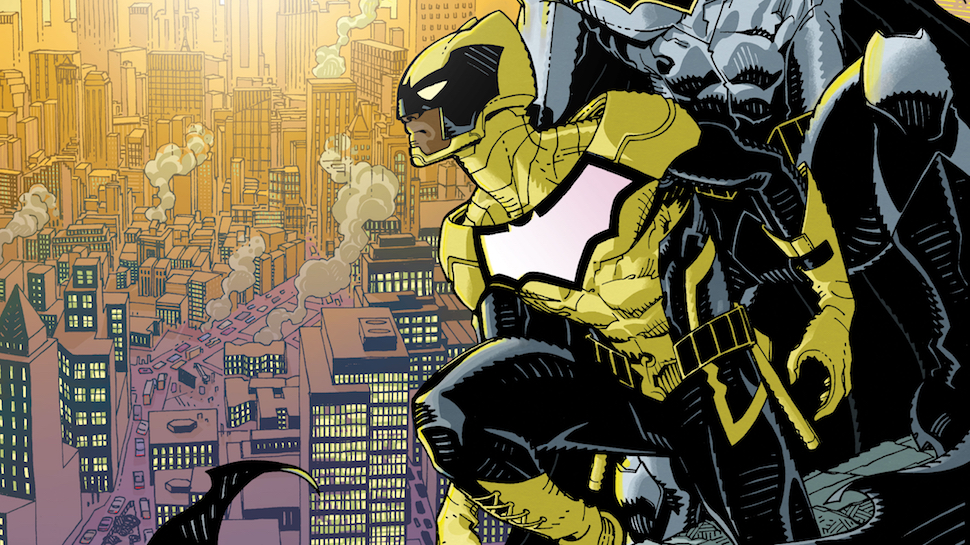 This is a new superhero title published by American comic book company, DC Comics, set in the fictional location of Gotham City and within DC Comics’ mainstream superhero continuity. The use of the brand “Batman” will make that immediately obvious to readers of the genre. And yet the title is somewhat misleading.

Despite the use and position of the Batman name in the title, Batman & The Signal is not a Batman comic. The Batman does appear in the comic in events set in current time and also in flashbacks. But this is first and foremost a comic about the super-powered character named The Signal. The Signal is an African American teenager who has “light”-based powers complemented by his training under the Batman. The plot involves elements that readers will not expect to find in a Batman comic, such as an abundance of characters that have superhuman powers (most Batman stories do not feature super-powered characters), and subplots involving a teenager’s personal life. Importantly, most of the scenes, from the character development segments to the fight scenes, all occur in daylight. Batman’s adventures mostly occur at night.

If we are to say the name of this title quickly, amalgamating the words “Batman” and “The Signal”, we are left with something like “bat signal”. The Bat Signal is an important part of the Batman mythos: a searchlight, with a blackened out centre in the shape of a bat. The Gotham City Police Department have long been depicted as shining the Bat Signal upon low-lying night clouds as a highly visible method of summoning the terrifying Batman, and incidentally rattling criminals with the threat of Batman’s presence. We think the title of this new series intentionally evokes this indicia. Indeed, the Bat Signal is a black bat symbol (in a white oval or circle). The Signal’s costume consists of a white bat symbol. We return to the significance of this symbolism below.

The differences may feel like a bait and switch. Obviously DC Comics are leveraging the evergreen Batman property to help get a new comic book series in front of new readers. To its credit the differences between the Batman and the Signal is essentially the point of the story. Batman works mostly at night. But Gotham City still needs protecting at daytime. And so it is implied that the story’s main character, Signal, has been entrusted with the task of being Gotham’s protector when the sun is up. The logic is curious but it does somehow make sense.

For new readers (especially those checking out the comic because of the Batman brand), Batman & The Signal might be disappointing. It is not a team-up comic but the start of a new mini-series featuring the character the Signal. And the comic is structured exactly like an introductory issue, using different segments to introduce the Signal and new side characters while explaining his relevance to more popular, established characters.

But this approach contrasts with the characterization of Duke Thomas (the Signal’s alter ego) as being more established and experienced than what new readers (or those who are not updated on current continuity, particularly the one left in the wake of the Dark Nights Metal event) would expect. The interactions between Duke and the Batman try to paint Duke as a very capable former sidekick, trusted enough by the Batman to be given the role of Gotham City’s guardian when Batman is not around. This contradicts the Batman’s long-running characterization as someone unwilling to entrust his responsibilities to other people, much less young inexperienced sidekicks, most of whom have held the title of “Robin” (in the duo, “Batman and Robin”). Most Batman readers will also find it difficult to accept the tall pedestal that Duke Thomas is being placed on, when there are several more experienced and commercially recognizable former Robins available to look after Gotham City when the sun is up.

There is a symbolic oddness of this appeal by DC Comics to a young, black demographic. A white man in a dark costume who is active at night time is the mirror of a black man in a bright costume who is active during the day time. Batman has had black associates before (Lucius Fox, and in 2011, Batwing), but this apparently conscious racial symbolism is new. Is there some nuanced message we are missing? The necessity of it causes us to scratch our heads.

All of those complaints notwithstanding, Batman & The Signal is still a decent read. There is quality in the writing. The abundance of subplots being juggled does not result in a muddled story. Duke Thomas is perfectly rendered as a novice superhero who has just been handed a huge responsibility, while trying to fit it in his personal life as a teenager. We have to commend Tony Patrick for not lingering too much on Duke’s personal life, thus avoiding any similarities to the hundreds of other comic books out there that rely on the protagonist’s teenage social life as a source of drama. In this comic, The Signal has more pressing issues than hanging out with his friends or trying to get a date with an attractive classmate, which is another good part of the comic. Any concerns that this was an iteration of Marvel Comics’ angst-ridden teen comic Spider-Man are abated by this first issue.

This first issue effectively establishes the core mystery of the current story arc, which involves the sudden increase of superhumans in Gotham City. And the circumstances surrounding these superhumans is a mystery to the Gotham City Police Department as well. The increase in superhumans involves normal teenagers suddenly developing abilities due to a still-unknown catalyst, some of these new abilities unfortunately resulting in violent death as their bodies reject these biological changes. The Signal’s part in this is also implied, as the new superhumans seem to experience an increase in their power if they are near the Signal.

While not exactly as accessible as one would expect from a first issue involving a relatively new character, we can still recommend Batman & The Signal as a new title to follow. It may require some backreading or research if you are a new reader who wants to understand every single nook and cranny of the plot, but the comic to its credit is not as abstract and obtuse as most of the titles that are related to the Dark Nights: Metal crossover event.

The only other issue to briefly address in this review is the temptation that DC Comics faces, in using the Batman brand as a springboard for a new comic. Marvel Comics faced and was overcome by a similar commercialisation lure in the 1990s, involving the shoe-horning of the letter “X” in front of as many titles as possible and thereby capitalising upon the zenith of the popularity of the superhero mutant team, the X-Men. The same situation occurred after the success of The Avengers motion pictures in the early 2010s, leading Marvel Comics to create as many Avengers-titled comics as possible. Neither led to high quality outcomes, and DC Comics face the same risk with the lavish use of the Batman brand. On the other hand, the powers and characterisation of the Signal sounds very much like The Ray, a DC Comics series that ran from 1994 to 1996. Is the Signal just a rejigged, late 2010s version of The Ray? Perhaps by adding the words “Batman and” to the beginning of the title “The Signal”, DC Comics hopes that this will lead to an ongoing series with a lifespan of more than two years.