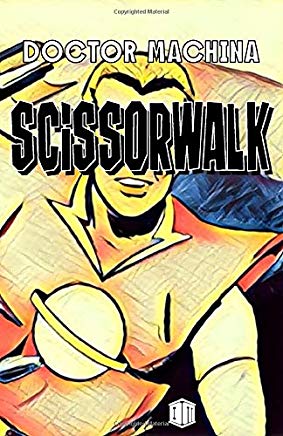 This is not our first encounter with the strangeness of Dr Machina. In March 2018 we reviewed Single Cell, the good Doctor’s first foray – https://www.worldcomicbookreview.com/2018/03/23/single-cell-review/ .

The introduction to this new collection, Scissorwalk, sums up the process:

What Dr. Machina has done in the pages of the book you are holding is take us once again to the future…even if it looks a lot like the past. Scissorwalk combines the idea of MST3K and memes into a (somewhat) coherent tale of Chet, who looks like the 1950s idea of what a real American should look like. And while that doesn’t all sound that futuristic you have to understand that it was made, in part, by a robot! Or, rather, artificial intelligence applications. See, Dr. Machina is only half- human, the other half of him is a robot (ta-da, that’s the secret I mentioned at the beginning). The human half selects the comics, processes the images and script with AI, and what’s in the panel of the new comic is the result. At some points, the human half of Dr. Machina does alter these images and texts to help form a coherent story, but readers never know which part was altered!

In an article on Medium https://medium.com/futuresin/can-you-teach-humor-to-an-ai-13ef4cff6cac , writer Phil Siarri examines the issue of artificial intelligence and humour:

Tristan Miller, a computer scientist and linguist at Darmstadt University of Technology in Germany elaborates on the complexity for machines to process context: “Creative language — and humor in particular — is one of the hardest areas for computational intelligence to grasp,”. Miller has analyzed more than 10,000 word plays and found it quite challenging. “It’s because it relies so much on real-world knowledge — background knowledge and commonsense knowledge. A computer doesn’t have these real-world experiences to draw on. It only knows what you tell it and what it draws from.”

(As part of our research for this critique, we discovered that reading into the concept of machine learning and humour takes you down some odd rabbit holes – for example, https://www.kaggle.com/abhinavmoudgil95/short-jokes , which is a dataset of  231,657 short jokes each with a unique identification number, for use in teaching humour to artificial intelligence.)

In Scissorwalk, rule-based software stumbles about trying to render appropriate the visual images fed to it by its anonymous human operator. In our last review we thought this was an exercise in Dadaism. Now we think this is something else – some sort of post-absurdity, incorporating William S. Burroughs’ cut-up technique (perhaps the etymology of the comic’s title?) and some slapstick algorithms. The human half of Dr Machina curates the outcomes, and some of them are laugh-out loud funny.

A quote from an article in The Observer, however, gives us pause: https://observer.com/2019/07/teaching-artificial-intelligence-humor-robot-comedy/

“Artificial intelligence will never get jokes like humans do,” Kiki Hempelmann, a computational linguist from Texas A&M, told the LA Times. “In themselves, they have no need for humor. They miss completely context.”

“Teaching AI systems humor is dangerous because they may find it where it isn’t and they may use it where it’s inappropriate,” Hempelmann added. “Maybe bad AI will start killing people because it thinks it is funny.”

And we have that a little bit here. There is borderline inappropriate dialogue about Hitler (“No relation”), conjugal visits, and melting people with ray guns.

Knowing that there is a human pushing the infant machine in a direction is fascinating. But the machine itself doesn’t know if and when it is being funny. It does not know what humour is. We laugh because we know the process has lead to the dialogue, connected by a loose string which the algorithm has perceived between the frames and the parameters of dialogue. But is genuine machine humour ever likely to be funny because of what the comedian is?

Presently, over at Marvel Comics in the pages of Powers of X, writer Jonathan Hickman has the world-dominating AI called Nimrod crack a wry joke: “No wonder I can’t sleep at night.” And it is a genuine one-liner because as a computer program (one embodied in an almost invulnerable ceramic frame), Nimrod does not sleep. But is it funny when it is delivered by a sentient machine with no inhibitions on killing humans, and the joke is a derogatory comment in the context of human frailty?

In William Gibson’s classic 1984 novel Neuromancer, an AI called Wintermute must manifest itself as simulations of humans as as form of graphic user interface. Those simulations engage in small human activities like brushing lint off their clothes, swearing, and making jokes as a form of ingratiation, deliberately intending to make you forget you are talking to a machine. In the pursuit of advanced sentience, Wintermute directly kills three members of an AI regulatory police force called Turing, sets up the suicide of two lead characters, and in the past killed a boy in order to keep hidden the location of a mechanical key. “I improvise,” says Wintermute. “It’s my greatest talent. I prefer situations to plans.”

What happens when an AI actually gets to the point of developing a sense of humour?

We enjoyed Scissorwalk, but we are glad that it is the human half of Dr Machina who wields the scissors. This comic made us think, for a very long time, about the future.