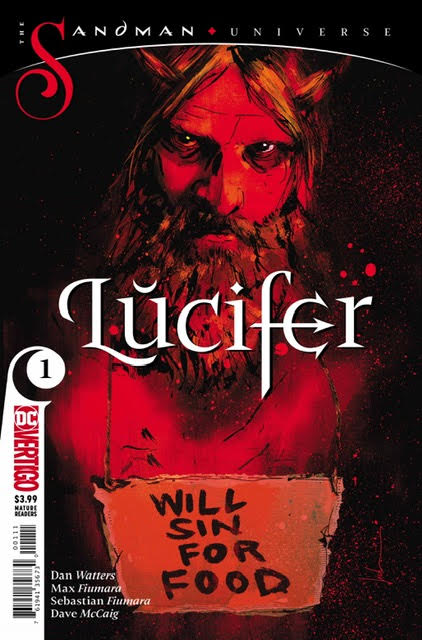 Vertigo Comics has relaunched one of its heritage titles, Lucifer. This was always going to be a creatively difficult task to execute. With tradition comes expectations. In the case of the fussy readers of Lucifer, these are high.

Legacy of the Devil

This comic book character version of Lucifer was first created by British writer (and now novelist) Neil Gaiman in the fantasy classic, The Sandman. Originally, the character was modelled on 1970s David Bowie. But later in the series, in the venerated chapter “Seasons of Mist”, Lucifer was depicted by Mr Gaiman as more a tired and cranky Roman Caesar, replete with toga, than languid rockstar. Lucifer quit being ruler of Hell, and took the title character on a tour of various doors and portals which Lucifer locked with a barbed and sinister key. He then was briefly seen on a beach in Perth, Western Australia (the home of your correspondent, by chance) to watch the sunsets, and later, set up a piano bar in Los Angeles.

Vertigo Comics then launched a stand-alone title featuring the character, written by fellow British writer (and now novelist) Mike Carey. Mr Carey borrowed heavily from John Milton’s Paradise Lost, and successfully: Lucifer, featuring an antagonist who was ruthless, manipulative, proud, and above all, relentless, was a quiet commercial success.

Since then, we have had Holly Black’s version of Lucifer (we gave a positive review of issue 1 and a negative review of issue 13) and Richard Kadley’s much better Lucifer (see our review of issues 14 and 15). (We have also had three seasons of a Fox television series of Lucifer, featuring a saucy version of the character who has all the gravitas of a double-decker sponge cake. Netflix has intervened in its cancellation to produce a fourth series. Pitchforks and fire await the producers in the afterlife.)

Writer Dan Watters starts Lucifer anew. “When he raises his fist to strike, the stars dim,” intoned one of Mr Carey’s supporting characters. But this Lucifer can barely feed himself breakfast:

Juxtaposition is a sound approach. When Mr Carey had Lucifer fly off into the void at the conclusion of his lengthy series, it was difficult to know how to justify the character’s return. Ms Black depicted Lucifer as some sort of cosmic tourist who returns to the piano bar to regale his demon fly bartender with stories of sailing through nebula. Mr Kadley threw Lucifer back into heavenly war: Mr Carey after all had the character as a highly interested bystander in the three way battle between the angelic Host of God, the Lilim and their allies Fenris the Wolf and Sandalphon the fallen angel, and the demons of a gentrified hell. But that war was finished by Mr Carey with few survivors.

In an interview for Comicbook.com, Mr Watters said,

“…thematically, I really wanted to take Lucifer, take this perfect sort of being, this first specimen of an angel and really, really break him and make him suffer the way people suffer. So in the first arc, he’s blinded, he’s crippled, he’s falling apart and he’s trapped. Which is essentially what the march of time does to all of us. It’s a book for cheerful people!… He’s watched struggles and he’s watched people come and go and be reborn and he’s just still there. He’s a solid figure throughout The Sandman Universe. But we’re about to put him through the wringer so he’s gonna have to find his place again, I think.”

The character lit the stars at the time of Creation and has been depicted in The Sandman and Lucifer as only second to God in respect of raw power. Mr Carey was required to trap or shackle Lucifer from time to time in order to be able to demonstrate the character’s cunning and relentless will. Mr Watters adopts the same tactic. Lucifer is trapped, in a place of gothic pedestrianism where his intellect is befuddled and his power disengaged. There is magic at work – at one stage Lucifer is literally washed up and into a bucket.

Only a vestige of his will remains: Lucifer knows only that he has been snared and that there is a way out. He decides to dig.

Perhaps this is the most wicked and vicious cage for Lucifer so far. The suave and proud archangel has been reduced to a manic and shabby paranoid. But while the piano bar has gone, there is still however a piano, albeit in a beautifully executed flashback:

Parallel to the main story is the tragedy of a police detective, Decker (not the chiseled beauty also called Detective Decker, from the television series), whose wife is dying from brain cancer.

It is in this side story that Mr Watters deploys the creepier elements of horror: a pulsing mass of flesh with a woman’s lips lives somewhere either in their apartment or up the back of the Deckers’ brains, and, later, a reptilian eye peeks through the gap of an ajar door. Decker is drawn into a scenario with such speed that only evil compulsion can be responsible – he misses his wife’s funeral to fly across the country to Gantley House, a sanitarium, and a name given to him in a nightmare.

We have marvelled at both his universal arrogance and his ability to effortlessly intimidate – or incinerate -his foes. But Lucifer’s best gift to his readership has been his ability to survive against a vast array of immutable forces that would have crushed a less determined player in the game. Mr Watters has cleverly devised for the devil the nastiest bear pit so far. We will watch with held breath to see if our anti-hero can figure his way out.