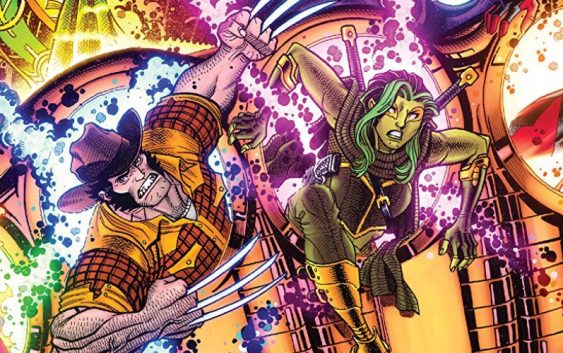 Infinity Countdown is a new cross-promotional comic book series from American publisher Marvel Comics, written by comic book scribe Gerry Duggan. It features several dozen superhero characters drawn from the publisher’s various mainstream publications, in a story that revolves around six cosmic artifacts called the Infinity Stones. These artefacts of quintessence individually control different aspects of the universe, but when used in unison they make the bearer omnipotent, omnipresent, and omniscient – a god that towers above Marvel Comics’ rather crowded roster of gods, demi-gods, Infinites, Beyonders, Watchers, Elders, Eternals, and other miscellaneous cosmic beings.

The comic is difficult for us to pitch. The story requires considerable prior knowledge of Marvel Comics’ publisher-wide shared continuity. There is an attempt to educate new readers and keep old readers up to date with a convenient infographic that:

a.) introduces the key characters and
b.) explains what the Infinity Stones are and how they work

Unfortunately, this attempt at a primer barely scratches the surface. A new reader coming in to the series will still find herself lost on who these characters are, how everything connects, and why the event is relevant. Veterans may also be saddled by the prior history of the Infinity Stones. They used to be called Infinity Gems and have been featured in numerous other crossovers and story arcs. But more recently they have been retooled, to better reflect the artefacts’ appearance in the Marvel Cinematic Universe, a bright mirror of the publisher’s comic book narrative.

Setting aside the insurmountable density of the backdrop, Infinity Countdown does exhibit Mr Duggan’s skill in crafting action-packed stories. The comic splits the narrative thread across different groups of superheroes, who are each in possession or guardianship of an Infinity Stone. There is immediacy in each of the plot threads, as each group deals with an assault from a villain or a group of marauders. Eventually there is an understanding of the stakes as one group works out that their possession of an Infinity Stone is discovered, and that there are dangerous people who are actively seeking each of them out.

The action is rendered well by Mr Duggan. The panic and desperation as the heroes is palpable. They find themselves outgunned, while ardently trying to protect a weapon that could potentially destroy the universe. There is also a little bit of interesting, though slight progression with the alien character Groot, a popular character in the Guardians of he Galaxy motion pictures, who used to be a monosyllabic tree-like creature primarily engaged for comic relief. In this issue, the ridiculously named villain, The Gardener, restores Groot to its original form. The restoration comes with an increase in abilities and vocabulary. This sounds ridiculous but it is a big change. However, there is no telling if the change will stick (no pun intended) given that the verbally-challenged comic relief iteration of the character is familiar to the broader audience of movie-goers, and easier to fit within the Guardians of the Galaxy’s team dynamics.

It is difficult to singularly criticize Infinity Countdown #1 for its inherent inaccessibility. The reliance on familiarity with Marvel Comics’ dense shared continuity is part and parcel of the super hero crossover genre (and this is something that other American comic book publishers suffer from.) Accordingly, our warning to new readers, that they are going to be completely lost and will struggle to understand unless they do a lot of backreading first, is probably entirely redundant.

Veteran comic book readers, on the other hand, might find yet another crossover about the Infinity Stones unnecessary if not downright predictable, but may still enjoy Mr Duggan’s mastery of the superhero genre and solid storytelling. All readers, new or old, should temper their expectations and not expect innovation.

There is some irony to Marvel Comics’ repeated utilisation of the word “Infinity” in their crossover epics. It makes one wonder if indeed the utilisation of what is slowly becoming a tired plot device, the quest for and defense of six all-mighty pieces of god-bling, might go one forever.