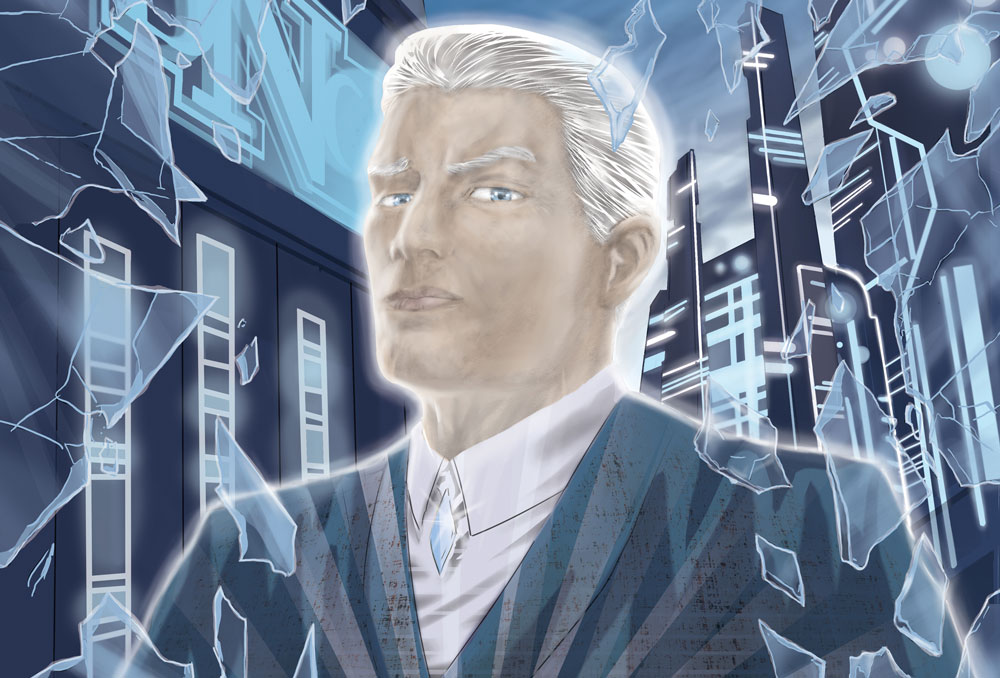 We have reviewed The Resurrected #1 in January year. The writer, Christian Carnouche, was kind enough to invite us to review the second issue of this entertaining, fast-paced title. Here is our critique.

The Resurrected is an action story based in a high gloss utopian future with dark hues of corruption and murder. One of the unique aspects of this comic book is the question it raises about indigenous cultures in the future. The export of mass media, particularly from the United States, in the later half of the twentieth century led to changes in language (see as one small example the decline of the letter “zed” in the Anglo-Commonwealth alphabet and its slow replacement by the America letter “zee”). The internet and Latin keyboards has caused the creation of other abbreviated languages of languages of adaptation which assist particularly people in different places to communicate. (This is most obvious with Arabic and Cyrillic.) In the scenario where language, as a key to culture, starts to homogenise, small bastions of indigenous culture face the prospect of crumbling as time progresses. There is nothing unusual in the consumption of cultural identity by empires, but social media and the internet subjectively appear to accelerate that process. So, for indigenous people living in the future, will they gradually lose their cultural identity? Will they clutch eroded cultural identity as a means of finding themselves? Or will their cultural identity become paramount, as a form of resistance to cultural homogenisation?

Issue 2 continues with the adventures of Detective Duluth, an Australian Aboriginal man who lost his family and has never recovered from the tragedy. In this issue, Duluth learns that his daughter is alive and has become an assassin of sorts under the tutelage of a highly capable, mysterious Aboriginal elder. Issues of parental abandonment and guilt intermingle with high octane action. Duluth is as previously noted a Luddite who hates the reliance shared by his peers upon advanced technology such as augmented reality vision and language translators. Yet he personally has a concealed cyborg arm. As a consequence, Duluth has a barely submerged self-hatred, fueled by the accelerant of survivor’s guilt. Duluth is very aware of his Aboriginality as a form of self-identification: he is not half-robot, his wrist band in the red, yellow and black of the Aboriginal flag reminds him, but instead a proud Aboriginal man. The characterisation of Duluth is compelling.

And the underpinnings of the plot are fascinating. Ancillary to the questions we asked in the second paragraph of this review is the exploitation of the unique genetics of indigenous people, and this seems to be an issue which has been incorporated within the plot by Mr Carnouche. Such concerns arose during the early phases of the Human Genome Project:

This concern has been echoed in Australia by Indigenous people many of whom refer to the Human Genome Project as ‘The Vampire Project’ fearing that genetic samples taken from them without consent could be patented and ‘owned’ by government or corporations. Of particular concern is the loss of control of Indigenous genetic information…. Article 7 of the International Covenant on Civil and Political Rights states that no-one shall be subjected to medical or scientific experimentation without his free consent. This right is confirmed in relation to research affecting a person’s genome in Article 5(b) Universal Declaration on the Human Genome and Human Rights. “In all cases the prior, free and informed consent of the person concerned shall be obtained.” However in Aboriginal and Torres Strait Islander societies the decision to give consent to the collection and use of genetic material is not only for the person concerned: knowledge is ‘collectively owned, socially based and evolving continuously’. Genetic knowledge is family knowledge and consent to its use is a community issue like consent to reproduce artworks. As a general rule, Indigenous communities have a decision-making structure which ‘overshadows an individual’s right to give consent, particularly when the consent has implications for the entire community.’ These structures include consultation with women as custodians of the laws. Past researchers have tended to ignore Indigenous women and have negotiated with the men. Failure to obtain women’s consent could constitute discrimination on the basis of gender.” [footnotes removed]

The plot describes camps holding Aboriginal Australians on Steward Island (south of New Zealand), and medical experimentation upon the inmates leading to “disappearances” of children. Aside from the Stolen Generation analogy which we referred to in our previous review, we perceive the most sinister aspects of the plot have roots in the complaint about “the Vampire Project”. A lot of considered thought has gone into the plot, and it shows: it is unique, nuanced, and a fine science fiction extrapolation of contemporary concerns about technology.

The Bad Guys are Bad

The only major complaint which we have about this title is that the villains are too clearly demarcated as villains. Their characterisation entirely lacks nuance: they are racist, and uniformly gun-happy (one screams “Die Motherfucker Die” as he blindly shoots his machine gun through the back of a police van door).

There is no obvious inner conflict in the machinations of the corporate antagonists. They are uniformly one-dimensional psychopaths. This is crude and is in stark contrast to the effort put into the characterisation of, particularly, Duluth.

Notwithstanding that, this is a title to follow. The world of The Resurrected is a utopia built upon a framework of lies and medically-sanction torture and murder. It is an entirely believable extrapolation of prevailing trends into a near future: the ultimate goal of good science fiction writers.