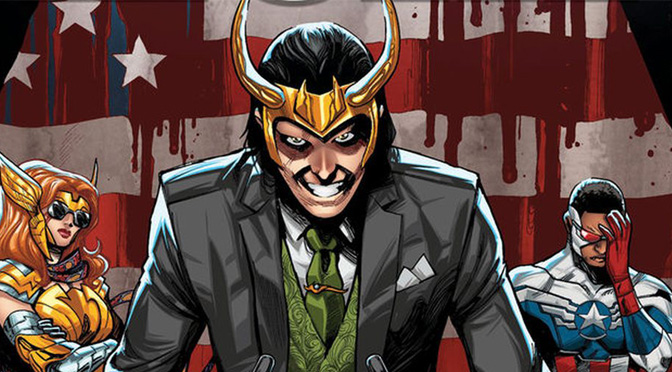 It is not a surprise that Marvel would come out with an election-themed miniseries right around the time when the United States is getting ready for its election, and neither is the decision to craft it around the Marvel supervillain and trickster god Loki. Politics, particularly the United States’, is now more than ever a very easy target for satire. There are numerous real world examples that the publisher can satirize using their version of the Norse god of lies and mischief.

The premise is simple. Loki wants to become the next U.S. president. But the way it is handled is surprisingly nuanced in balancing the protagonist’s character foibles against politics. We discuss that in some detail below.

The comic is a great example of how to treat the burden of extensive comic book continuity, which obsessive fans treasure: the comic addresses events that have happened in other comic books, but in a way that will make the comic still accessible to new readers.

Old readers (particularly those who follow continuity obsessively) may get a kick out of recognizing that the comic references Avengers #1 (1963), which saw the first members of the superhero group banding together to fight a Loki-possessed Hulk.

But to new readers, the flashback only serves as a setup to “Vote Loki”‘s plot, as money donated by Stark Enterprises towards the rebuilding of a neighborhood destroyed in a superhero battle was embezzled by the city’s fictional then-mayor, Adam Hitt.

One of the children displaced by the destruction of Manhattan and the embezzlement of rebuilding funds has grown up into the comic’s protagonist, reporter Nisa Contreras. The character is described as an established reporter, getting to where she is by running an expose on Mayor Hitt’s corruption.

In this story, Nisa is attending a press conference for two competing presidential candidates. The conference is attacked by a group of disguised Hydra terrorists (Hydra being the default terrorist organisation amongst Marvel Comics’ publications).

But they are stopped by Loki disguised as another reporter. In dialogue, Loki implies that his attendance and decision to intervene in the attack was made on a whim. Loki then proceeds to ruin the candidates’ chances of winning by publicly calling them out and revealing their lies.

When accused of hypocrisy, the trickster cleverly deflects it by admitting that he may indeed be a liar but unlike the other candidates, he is not hiding it. It is a flawed argument that many readers will be familiar with from the current presidential candidate campaign of Donald Trump. Loki positions himself as someone the voter can feel safer with compared to other candidates, because you always know where he stands: he is the devil you know. In that regard, the story has a cynical but very contemporary tone.

From thereon, Loki stays true to his character as a trickster, constantly denying that he is trying to run for office, while doing things in the background that will help him gain the public’s favor. It is a nice change of pace that Loki is not the monologuing, superpowered villain portrayed by many other writers. This version of Loki is treating the election as a game, playing along with the rules and only using his powers to manipulate things behind the scenes in order to tilt the odds in his favor.

The public’s reaction as depicted in this issue may also hit close to home for some readers – people start out treating Loki dismissively as a joke, until they start gravitating towards him believing that Loki is actually a viable leader by virtue of being transparent and being the lesser of all evils.

Except Loki is neither, as discovered by Nisa (an example of a character with genuine journalistic qualities in a comic book, displaying demonstrable smarts and natural inquisitiveness.) The first issue ends with Nisa finding out the lengths that Loki will go through, before getting a visit from Loki’s superhero nemesis, an angry Thor (the female version, which we discussed in a previous review).

“Vote Loki” #1 is, curiously, both jaded and refreshing. This reviewer initially thought that it was a cheap attempt to cash in on the upcoming U.S. elections, by crafting shallow political satire and dressing it up in Marvel intellectual property. But it is pleasantly surprising that this story plays out the other way around: this is a Loki story first and foremost, an exploration of the character’s complex personality, and wry cynicism rooted in contemporary political themes is added for flavor. There is some quality writing present in this first issue.