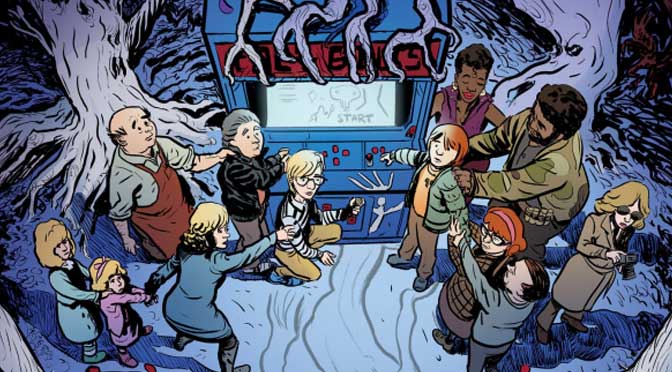 With the benefit of hindsight, it is remarkable that no one has previously thought to turn this particularly compelling urban legend into a comic book.

The title, written by Benjamin Grisanti, comes at a topical time in legal circles around ownership of urban legends. The World Trademark Review (no relation to this website) reports that a new academic paper studying the IP status of internet folklore is about to be published. It is entitled “Beware the Slender Man: Intellectual Property and Internet Folklore” and will appear in the Florida Law Review. The paper has been written by Cathay Y N Smith, assistant professor of law at the University of Montana. Professor Smith argues that online community-created works are in the creative commons. She goes further and asserts that claims of ownership pursuant to either copyright or trade mark law – harm the public by depriving it of creative works. The research focuses primarily on the fictional horror character “Slender Man”. “Slender Man” was created on the Something Awful internet forum in 2009, through a highly collaborative process between hundreds of creators. There are no obvious intellectual property rights accruing from the creation of “Slender Man” as a consequence of that crowd-creation process. But a major Hollywood movie next year based on “Slender Man” has led to a flurry of assertions of trade mark rights and copyright through both trade mark applications and cease-and-desist letters. This is had the effect of smashing ongoing, fair use collaborations to perpetuate the horror legend.

The urban legend underpinning this particular title, regarding the dark and harmful video game “Polybius”
distributed by a mysterious company called Sinnesloschen, is not subject to the same legal restrictions. There is a US trade mark registration for “POLYBIUS” (USTM 7737215) owned, amusingly, by Sinnesloschen LLC, and registered for “entertainment services, namely, providing on-line downloadable software for computer games.” A second pending US trade mark application for “THE POLYBIUS CONSPIRACY”, applied for by Flight 305 Media LLC on 30 August 2017 is for “entertainment services, namely, providing podcasts in the field of mystery.” Neither of these intellectual property rights directly affect the publication of a comic book about the Polybius arcade game.

The urban legend, which revolves around the idea that a sinister government program was embodied in a 1980s arcade video game, seems to have materialised in or around 2000. Inevitably, as an urban legend, it is the subject of much internet discussion, and has been the subject of brief discussion at Snopes.com, the famous systemic debunker of lies, myths and fake news.

The story in this title is based in 1986, in a town called Autumn Hills in New York State. There is some horror movie cliche in the basic plot of three nerds being cruelly bullied by larger boys at school. The three protagonists spend time at a local video game arcade. Mr Grisanti inserts some wry humour into the dialogue: the mother of one of the boys laments how children spend all their time on Atari video games, or playing Dungeons and Dragons, or (quaintly) watching MTV, but spend no time outdoors playing baseball. Mr Grisanti is nudging the reader in the ribs and grinning. Both everything and yet nothing has changed since then, and most teens growing up in the 1980s would have heard this complaint from their parents. Older readers are invited to share in the joke.

There is some very good characterisation around the owners of the game arcade. The owners are a black couple, running a business called “J&J’s Arcade Pinball Games”, where the consumer market consists of predominately white teens. “People in this town already don’t like us,” says Jame, one of the owners. The haze around that comment, whether the dislike is fuelled by racism or triggered by leading teens astray by owning an arcade, is deliberate and clever.

Towards the end of the issue, we see the eerie consequences of playing Polybius. Spectres and glowing shadows haunt the dreams of the characters, and suicides and strange deaths are suddenly on the rise. It is genuinely chilling. The opening page of this first issue reveals the endgame: a city building is on fire, a crowd of people stand on a street corner as police cars barrel in, and, apparently, the protagonists turn on each other in an alley. Some solid creative thinking has been applied by Mr Grisanti in plotting this innovative and creepy title.

Polybius Dreams is a Kickstarter funded project. Fundraising for the second issue is due to commence shortly. (And, as an aside, Kickstarter comic creators should seriously think about registering the titles of their projects as trade marks. It is always better to be the bat than the ball.)