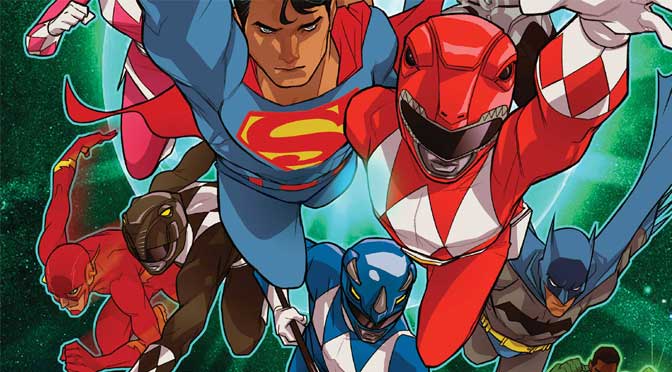 Comic book crossovers are focused on cross-selling. But this is plainly obvious in the case of “Justice League – Power Rangers” #1 and 2. Both DC Comics’ “Justice League” superhero group concept, and “Power Rangers” (owned by creator Haim Saban) feature in upcoming movies. Perhaps this title is intended to drum up interest in the forthcoming movies among fans. In any event, the premise is so far-fetched that only self-conscious irony saves it.

The Justice League is a team of superheroes consisting of DC Comics’ most popular characters such as Superman, Batman, Wonder Woman, Flash, and Green Lantern, while the Power Rangers are a team of teenagers who wear color-coordinated costumes with a theme based on dinosaurs. The tonal difference between the two franchises is explained through de rigeur use of inter-dimensional travel.

In the story, Zack, who is known as the Black Ranger, was baited into leading the Power Rangers’ nemesis, the evil space tyrant Lord Zedd, back to their secret base. Instead of risking the life of their mentor (oddly enough, a disembodied head named “Zordon,”) Zack decided to use a broken teleporter to teleport himself and Zedd away from their secret base. As a result of using the broken teleporter, Zack finds himself and a bunch of the enemy’s henchmen (called the “Putty Patrol,” because they are golems made from putty) into DC Comics’ mainstream continuity, depicted as a separate universe.

Through coincidence, the Black Ranger’s fight with the Putty Patrollers was witnessed by Batman. Batman assessed both the Black Ranger and the Putty Patrollers as threats and asked them to put all of their weapons down. Of course, this being a crossover comic, the misunderstanding eventually led to a brawl that Batman dominated at first, before the rest of the Power Rangers appeared and started to overpower him. Enter the rest of the Justice League, and we get the obligatory cross-franchise rumble.

The Justice League had the advantage, but cooler heads prevailed and the fight was ended before anyone from either side was hurt. The story then shifts focus to Lord Zedd, who was transported by the broken teleporter into one of the bottled cities collected by alien supervillain Brainiac, a long-standing enemy of Superman.

In these sorts of titles, the villains from each respective franchise almost inevitably pair-up. And so, ever the opportunist, Zedd managed to convince Braniac into a partnership, dangling Angel Grove (the city that the Power Rangers story is set in) as a carrot, in exchange for some of his specimens and help in conquering the version of Earth in the Power Rangers’ dimension. The comic ends on a cliffhanger with the Rangers and the Justice League deciding to join forces as Zedd’s army of giant monsters attack Earth en masse.

Writer Tom Taylor is clearly aware of how ridiculous and silly the premise is, and decides to use wry humor to tackle it. By way of example, at one point, the Flash is depicted as understanding why the Black Ranger attacked the dark costumed and grim Batman, reasoning that it is what he would have done if he did not know who Batman was – a line of reasoning that the Green Lantern agrees with.

As mentioned earlier in this review, this mini-series is designed for cross selling and as part of a multi-platform campaign to promote movies, so expectations should be kept low. Stay away if you are looking for something ground breaking or innovative. Mr Taylor shows skill in his handling of the characters, but it is clear that he is writing under the constraints inherent in a cross franchise crossover story.