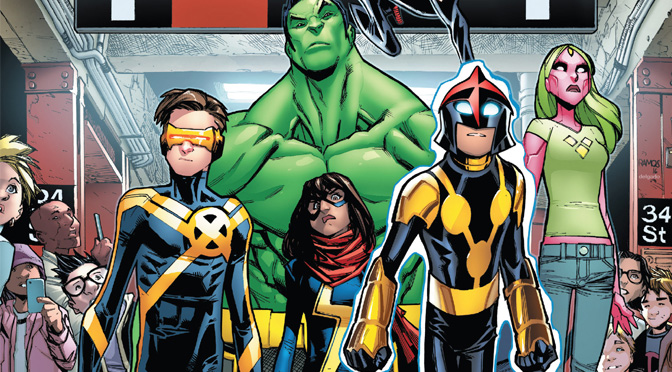 Champions #1 is a new comic book series from American comic book publisher Marvel Comics. The title has a history within Marvel Comics. But this comic does not have anything to do with the “Champions” team from 1975, which featured characters from the X-Men franchise, Ice-Man and Angel, along with other slightly obscure characters, Black Widow, Hercules, and Ghost Rider. Instead, it introduces a new team consisting of young (both in terms of story and publishing history) characters: the popular, Muslim teenager, Ms. Marvel (Kamala Khan), a space-based character called Nova (Sam Alexander), an alternative universe Spider-Man (Miles Morales), the newly re-vamped Hulk (Amadeus Cho), and Viv (the “daughter” of a robot from the Avengers title, called the Vision).

The comic’s story is set an unspecified amount of time after the events depicted in Marvel Comics’ very recent “Civil War II” crossover event. This event saw the publisher’s different super hero teams being divided (and fighting) over their approach to crime fighting. Normally this formulaic and contrived storyline would be very tedious, but this time the action was triggered by the opportunity to see the future consequences of their actions or inaction. Told through a flashback, Spider-Man and Nova have left the Avengers after being disillusioned, complaining that they did not sign up to fight against friends and colleagues. The comic’s centrepiece character, Ms. Marvel, followed later after having enough of witnessing civilians get caught up in superhero brawls. The remainder of the story has Ms. Marvel contacting Nova and Spider-Man, along with Amadeus Cho and Viv Vision in order to set up a new team that focuses more on saving lives than brawling. In that sense, by way of analogy, the banded heroes act more like firefighters than soldiers, which is somewhat refreshing.

The climax of the comic has the team joining forces against a minor super villain that operates a human trafficking business, and coming face to face with the truth that heroes do not always get to save every one. This results in Amadeus Cho almost killing the villain in an emotional outburst. This should have made the point about how close the group are to the older superheroes they spurned, but there is a dearth of context, and that makes what would have been a characterisation development flat. The limitations of the number of pages in the issue result in poor execution, and kill the effort at depth.

Speaking of the older heroes, the writer, Mark Waid, seems to prop up the effectiveness of the younger heroes. This at the cost of making the veteran characters look inept and unprofessional. For example, there is one scene early on involving a fight between the Avengers and their long-time adversaries, the Wrecking Crew (a quartet of street criminals given enchanted weapons by an Asgardian sorceress). The Avengers refuse to engage in post-fight rebuilding efforts because the only Avenger with engineering experience, Tony Stark, is not around. This does not ring true.

Disregard for the welfare of civilians also comes off as out of character, given that the Avengers in attendance, including the newish version of Captain America (Sam Wilson) and the newish female version of Thor (Jane Foster), have each been portrayed in the past as more empathic to civilians – especially the current incarnation of Thor when compared to the original, male Thor.

Beyond those minor complaints about characterization, Mr Waid puts in a commendable effort, portraying the young heroes as having the right idea yet lacking the experience needed to pull it off smoothly. The narrative is refreshingly absent the melodramatic angst and grit that make contemporary superhero titles such a chore to read. Depending on where Marvel Comics goes with this title, they may have a more grounded modern take on the light, optimistic superhero stories that flourished before superhero genre writers Alan Moore and Frank Miller set the tone of the milieu as dark and edgy.