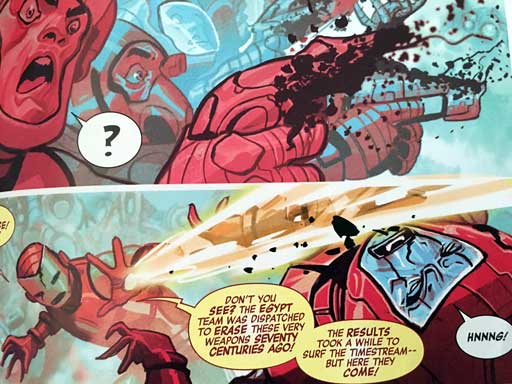 An executive manager of American comic book publisher Marvel Comics was last week reported as blaming the recent shift into gender and ethnic diversity amongst its character properties as the reason for a sharp decline in sales. The observation has been controversial and was picked up by the mainstream press.

The changes Marvel Comics have wrought are, in summary:

a. the male God of thunder, Thor, has been replaced by a woman who first appeared as the male character’s love interest in 1964;

b. the white, male Spider-Man now shares the role with a black teenage boy and a white girl, both of whom are from parallel universes;

c. the long dead, space-faring, male Captain Marvel has been replaced by the character once known as Ms Marvel;

d. Ms Marvel’s role in turn has been taken up by a teenage Muslim girl;

f. the role of patriotic icon Captain America is shared between the original white man and a black man, and very recently with “America”, featuring a character named America Chavez, who is both lesbian and Hispanic;

g. Iron Man, a white man, has been replaced by Iron Heart, a black teenage girl;

h. mutant tough guy Wolverine has been replaced by his teenaged female clone.

It is the sudden pace of change rather than the change itself which seems to be causing offence. Statistics website FiveThirtyEight’s graph, below, shows what slow ground up until 2015 Marvel Comics was making in respect of incorporating women into its premier superhero aggregation title, “The Avengers”:

Keeping track of Marvel Comics’ sales is like following the blur of a shell game. Marvel Comics frequently relaunches titles or launches twinned titles (“International Iron Man” and “Notorious Iron Man”; “The Mighty Thor” and “The Unworthy Thor”). This is almost certainly a sales strategy. It is assumed that readers are more likely to buy a first issue of a title as opposed to, say, the seventy-sixth issue of a title. But it is hard to know if that assumption is actually correct. What effect this alone has had upon sales is unknown.

The push into diversity follows upon Marvel Comics acquisition by Disney in 2010. The subsequent appointment of Sana Amanat as an editor and creative director of Marvel Comics is an indicia of Marvel Comics’ prevailing philosophy. Ms Amanat is responsible for guiding the writers who have revamped characters such Captain Marvel and Ms Marvel, and has become within a short time an iconic figure for diversity in the medium.

But the disgruntlement in Marvel Comics’ push toward diversity is easy to understand. The core of readership for decades has been white men who grew attached to the characters. As is the intention of the titles having regard to the impressionable target demographic, the adventures were either a means of escapism for (overwhelmingly) teenaged boys, or provided an benevolent ethics framework during the incipience of moral awareness. As this Finnish study notes, in the context of superheroes as moral agents, “children need guides and defenders”. Scratching away at or erasing the characters which underpinned an important developmental stage will, of course, cause an angry backlash from those young boys who have become men. It should take no retrospective vision to have determined that.

But the shift into diversity is inevitable, for commercial reasons. Disney does not invest in diminishing businesses. As noted on this link.

“Jason Aaron, who has been writing “Thor” for about two years and is heading up the new female-led series, explained that the comic book business painted itself into a demographic corner. “Over time, we started to appeal to the same, dwindling fans,” he said, adding, “I don’t say that derisively, because I’m at the heart of that dwindling group of fans, and always have been.” (Aaron is male, white and 40 years old.)”

A new readership to a young audience, imbued with liberal attitudes and tolerances, was not predestined, but it was obvious. Disney’s ever-expanding portfolio of princesses have become more racially diverse as it sought to tap into new markets and appeal to girls of different ethnicities (“Moana” is far removed from “Sleeping Beauty”.) Illustrative of but also beyond this, Disney is happy to use its weight to spread liberal perspectives (famously, by drawing to a halt its operations out of Georgia because of the HB2 controversy.

Having regard to the landscape of Marvel Comics’ characters, a diversity shift is most likely to be successful if the new version has a granite link to the original version. The female Thor (Jane Foster appeared in the male Thor’s adventures from September 1962 onwards), the female Wolverine (which first appeared in an X-Men related comic book in 2004), Captain Marvel (first appearing as Miss Marvel in 1977), Sam Wilson’s Captain America (first appearing as The Falcon in 1969), and the black Spider-Man (first appearance in 2011) are all likely to have longevity because the long-term core of fans know the characters. Each of this characters have not been rapidly or jarringly shoehorned into their new roles. Care and respect was taken in the transition. The writers and editors involved took advantage of each characters’ existence within continuity and transformed this into a very long lead time for a transition.

Given the departure from this formula in respect of both Iron Heart and the new Hulk, both iterations seem unlikely to survive any longer than American comic book publisher DC Comics’ female accomplice to Superman called “Strange Visitor” (created in 1999 and killed off in 2001).

Which brings us by a very circular route to “Avengers” #6. Written by veteran Mark Waid, this issue is the final chapter on what appears to be a preemptive strike by the Avengers superhero team upon a time-travelling tyrant called Kang. The story is muddled and the conclusion is entirely hard to follow. In defeating Kang at various point in time (destroying his arsenal in ancient Egypt, interrupting his revenue stream in a far future), the Avengers somehow but inadvertently cause three alternate versions of Kang to team-up, with lethal consequences. Some of the plot is very odd: Iron Man refers to the consequences of the destruction of the arsenal “travelling up the time stream” so as to cause weapons used by Kang’s minions to explode in their hands.

Surely the weapons would instead never have existed if destroyed thousands of years in the past? But in any event, Spider-Man and Captain America celebrate the accomplishment of their mission:

The Avengers are annihilated. Disaster is averted only at the last minute by an incomprehensible deus ex machine device wielded by Giant-Man.

Notwithstanding this clunking storyline, Mr Waid has thrown into sharp contrast the evolution of the Avengers by (somewhat inexplicably) using time travel to shanghai members of the superhero team from different eras.

One group consists of the members of the original team from the 1960s. It is a collection of white men plus the Wasp, at that time the female sidekick of Ant-Man.

The third group is the present day aggregation of characters, including the female Thor, and the black Captain America.

The differences in diversity between the first two groups and the third group is starkly laid out by Mr Waid.

The conclusion is as clumsy as the rest of the story. The device which saves the day is used by a future version of the android superhero called the Vision to send each team back to their respective eras, as well as erase their memories of the event (the characters had no say in this, and look quite unhappy about it):

There is one amusing moment where the male Thor from the 1960s wants to know how the female Thor came into possession of his hammer. Jane Foster dodges the question:

This comic is not an inspired piece of writing, disappointingly so from a writer of Mr Waid’s reputation and skill. But it does entirely capture the essence of the debate over the replacement of Marvel Comics’ legacy characters.