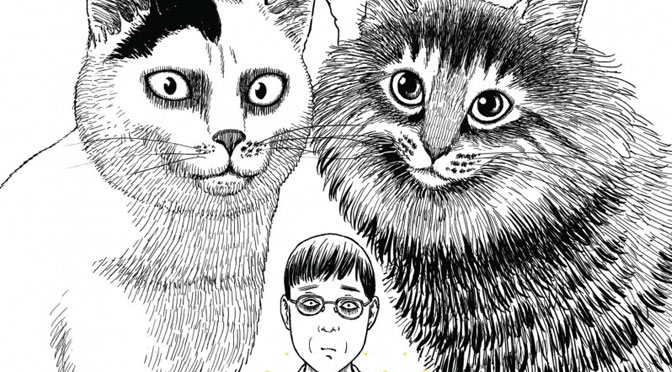 “Yon and Mu” is an autobiographical exercise, the description of a dog person’s slow transformation into a cat person.

Writer and artist Junji Ito marries his sweetheart, described as “A-ko” (“ko” being the Japanese suffix meaning “child”, but has affectionate and cute connotations- “nekoko” for example means “kitten”) and they move in together. What Mr Ito entirely forgets is that A-ko has a cat, named Jun, which has been residing with her parents. And Mr Ito does not like cats.

Because he is an artist of horror manga, Mr Ito reverts to his tradecraft when describing his interactions with the cat. Jun is described as having an alien stare and a sinister bearing. When Jun sticks out his tongue to vomit, the image is captured with photorealistic horror – jaw almost disengaged and tongue projecting out out like a ghastly protuberance. At one point, when Mr Ito is out to meet a deadline, Mr Ito’s fatigue causes Jun to transform into a variety of monsters. It does not help that Jun has patched markings on his coat which look like a ghoul’s face. Mr Ito starts muttering to himself about curses, the cat causing anxiety and creeping horror.

Mr Ito’s apprehension is increased when A-Ko then decides that Jun needs company, and purchases another cat named Mu. The two cats are frequently engaged in a process of silent judgment of Mr Ito. Mr Ito tries to become a cat person by engaging in mad, intense efforts at affection which paints him (literally) as a lunatic, face-distorted. Mu rewards him for his efforts by biting him. When Jun becomes sick and starts sneezing, to Mr Ito’s horror the floor is covered is slimy cat snot. The house is quickly transformed into a cat domain, as the walls are foiled up to resist scratching. A-ko seems unperplexed by or even ignorant of Mr Ito’s difficulties in coping with the transition.

Gradually things change in the house as everyone gets used to each other. By the very end we learn that Jun has died, and both of the humans – including Mr Ito – are deeply saddened by this. There is a small shrine to Jun on the mantle, which includes a photograph and a small bowl filled with cat treats.

Because Mr Ito is a horror artist, for a large chunk of the comic A-ko is drawn with no pupils, as if she is acting without autonomy under a malevolent, zombie-esque spell of the cats. About halfway through he collection, in one of the punctuating question and answer pages (almost like a letters page), when asked about this by a reader, Mr Ito reveals that he got into trouble with his wife for drawing her in this way. Also, the striped pants which A-ko wears do not actually exist in her wardrobe and this appears to have irritated her, too. It is an amusing insight into their relationship.

This is not a traditional manga in the sense that the art is very Western in style. But throughout the comic are sound effects written in katakana and which have not been translated into English (the comic was published in 2009 but was translated into English only in 2015). For a non-Japanese speaker this means some of the context is inaccessible. This is a shame. The katakana characters are literal sound effects and are often very humorous. But trying to translate these graphic elements of the text would have been practically very difficult.

This is a curious tale written with subtle tones hidden amidst the schlock horror of Mr Ito’s reaction to the cats. It has no overarching plot and in that sense reads like a disjointed blog, and includes photographs of the cats as well as the muted interaction with readers. Because of this approach, the story comes across as very authentic and personable. We laugh with Mr Ito rather than at Mr Ito. The emotional response by the conclusion is unexpected. For a story which at a superficial level is about the horrors of cat ownership, there is surprising depth to the writing.