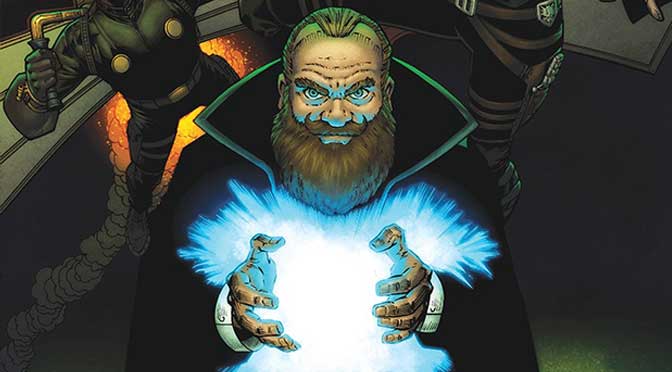 This steampunk comic book aims for a particular target. Aldous Spark is a member of a Victorian era society of do-gooders. In order to achieve his purposes, Aldous deploys an array of steampunk devices including powered kite wings, epoxy glues, pneumatic guns. Aldous is accompanied by a motley crew of confederates: his young and somewhat conservative apprentice Isaiah, the fey Anglo-Indian opium den manager Ariceli, and the treacherous thief Marla. Aldous and his companions go about recovering lost relics and interpreting Renaissance paintings, pursued by a ninja-esque cadre of Vatican assassins called the Red Priests.

The story, written by Andrew Maxwell and Peter Miriani, has faint echoes of the video game franchise “Lara Croft: Tomb Raider”: the chase for clues to ancient treasures motivated by good causes, punctuated by gun fights and near misses.

The comic also strongly draws upon the 2009 motion picture “Sherlock Holmes”, directed by Guy Ritchie. This movie, significantly, is doused in Mr Ritchie’s acerbic wit. “Sherlock Holmes” was set in Victorian times, and was almost – but not quite – a steampunk themed movie. Setting aside convergent themes, the other similarly is in the dialogue. The eccentric Sherlock Holmes had Dr Watson has his grounded foil. Here, Aldous Spark has Isaiah, and the best lines in this issue are reserved for their exchanges. Here are the two best examples. First, the two enter a very seedy and busy alley in London:

Aldous: “Look at this magnificent city Isaiah, just teeming with life. One cannot help but behold the veritable centuries of culture and learning that brought us to this point.”

Isaiah: “Those people are having intercourse.”

Aldous: “Ah, we’re here. Fascinating architecture, don’t you think? Reminds me of the Chinese province of -”

Aldous’ natural buoyancy is contrasted exceptionally well against his companion’s rational, almost dour assessments of their surrounds and the various perils they face. Messrs Maxwell and Miriani seem to be enjoying themselves with these entertaining exchanges, and the fun is contagious.

The plot is nothing new – a Church-led conspiracy, religious tradition preserving dark secrets by seeking to extinguish the light of truth brought by modernity and technology. And, stripped of its gloss, the epilogue, a gruesome meeting of a depraved secret society called the Feast of the Unspoiled, is distasteful in its titillation. The threat of torture of a young girl before an audience does not advance the plot and is a stain on an otherwise respectably well-thought through story. But when the secret of Brother Pablo Frasioni’s painting is revealed, the purpose of this title is manifest. It is indeed to have fun, and Messrs Maxwell and Miriani in that regard are true shots. When the writers are focussed, they hit their target.

(This title is a Kickstarter project, and more information on it can be found here.)