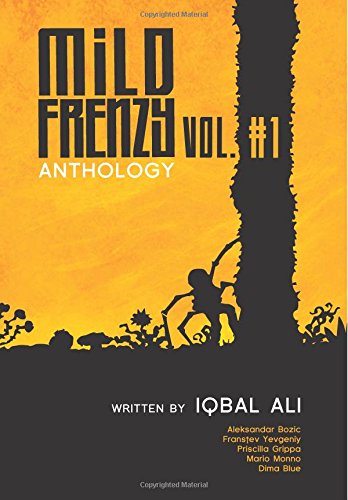 Mild Frenzy is a collection of very short vignettes, each in comic book form. As collections of short stories go, the topics from the single author, Iqbal Ali, is more akin to rapidly turning a kaleidoscope. Frequently your reviewer was left after a three page story querying the point of what he had just read. But each image peered through the kaleidoscope slowly becomes entrancing to the observer.

The collection starts with “Ears” – easily the weakest story, and a poor choice of bait with which to hook the reading audience. It is a profoundly negative look at vanity: a man takes medication to stop his eyes from wobbling as he eats. Certain medications can cause significant weight increase, but what is missing from the story is that the nameless lead character would come off the drugs upon falling into obesity and try and reverse the effects.

The stories range far in respect of them:

a. the dystopian surreal (preparing for the possibility of predatory flocks of flying crocodiles; a failed effort to destroy a beanstalk to the moon as the backdrop a doomed romance with a flower sprite – a very poignant and disturbing vignette vaguely reminiscent of the conclusion to Warren Ellis’ Supergods);

b. contemporary horror (a malign ghost, thoroughly disliked as an “asshole” during life, who takes advantage of gossip social media to kill a big crowd of people, for no reason other than continuation of his nastiness after death);

c. a sad story about a man failing to make it to meet his sister and the poignancy of dying too young (the intervention of a faceless but bearded psychopomp in the suspended journey of a lost soul).

It is a thoroughly engaging collection.

We asked Mr Ali to explain his motivations for such a random assortment of stories:

“In terms of my philosophy, I guess it’s a mixture of me experimenting and putting down/communicating a lot of thoughts. Before this, I spent a lot of time on single longer stories where the the ideas and themes had to be focused. With these shorts I felt I was free to explore different themes and ideas and try out things that were potentially risky, knowing full well that not all of them might land.

For example, Ears is about how vanity just ends up screwing you over, and Human Version is about loneliness–especially as it relates to our use of technology.

It’s also trying to implement some structural ideas from poetry–I took a poetry a class recently, and the teacher pointed out lots of different forms and structures of poetry. Like sometimes a poem would just describe a moment or even an object in so much detail as to reveal something meaningful.”

The result is an exercise in chaotic fractal patterns, a fact Mr Iqbal recognises:

“In terms of patterns / themes, how I approached these stories is that I wrote a load of these stories. After I’d written a few I selected ones I though fit well together for the first volume. I tried to pick out the stories that were loosely based on the themes of memory — including questioning the accuracy of memories.

The main thing I wanted these stories to do is to have readers question reality among other things. I approached it as a sort of a version of Black Mirror or Twilight Zone. I also tried to arrange the stories so that the surreal ones are interspersed with ones which are (slightly) more down to earth.”

Too much concentration on the underlying meaning of the texts as a collection and the reader misses the point – that there is no point to the myriad tangents at play. The outcome of the turn of the kaleidoscope is impossible to predict. This is Mr Ali’s toy box. We are glad he is sharing this particular toy.