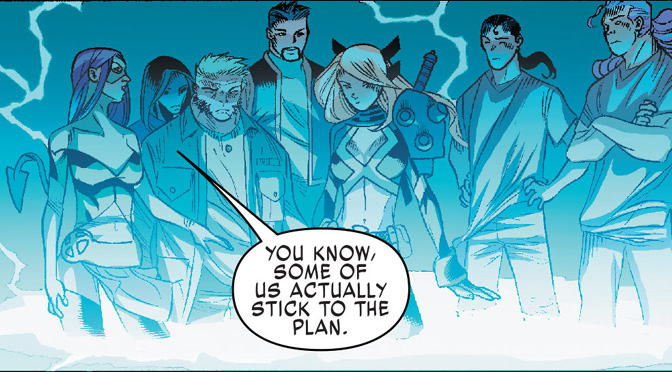 American comic book publisher Marvel Comics has spent the past couple of years targeting new readers, primarily leveraging upon the success of related company Marvel Studio’s motion pictures. The print strategy is to refresh existing superhero franchises (usually by having a new character take over an established hero’s role) or by introducing substantive continuity changes to a property.

Some of Marvel Comics’ superhero characters are described as acquiring their powers through unlikely mutation, the product of madcap evolution, and these characters tend to sit apart from the other characters. Marvel Comics’ once flagship line of mutant-centric X-Men comic books were given the latter treatment of continuity shift. “Extraordinary X-Men” Annual #1 is an example of why the approach is counter-productive.

“Extraordinary X-Men” Annual #1 comes with two stand-alone stories. The first tale starts with a weather-controlling mutant named Storm, now the leader of one of the two major X-Men factions formed after former X-Men mentor and founder Professor X was killed in combat by his former student, Cyclops. Storm negotiates with two unnamed representatives of the British Government regarding the transfer of two imprisoned mutant criminals, named Ramrod and Ruckus, to X-Men’s custody. This is in order to keep the two mutants safe from a wave of the Terrigen cloud that is expected to pass their prison.

The Terrigen cloud, in Marvel Comics, is a deus ex machina plot device, and a clumsy one. It is a mysterious chemical that is harmless to normal humans, but can awaken unique latent powers with those people who have what is described, within Marvel Comics’ superhero continuity, as the “Inhuman” gene. Unfortunately, the cloud is unintentionally fatal to those with mutant genes, hence the X-Men’s concern.

This story underscores the extent to which the X-Men titles have changed in direction. While the comics themselves have always been political in nature – with the mutants’ plight being an allusion to the discrimination suffered by different minorities – the new direction of these X-books now have the mutants functioning as an independent, if somewhat informal, nation-state, akin in a way to Jewish politico-religious interests. This means any event involving mutants and humans is treated almost as a foreign relations issue. It works as a convenient way of explaining the absence of one of the most powerful factions, “mutantkind”, in Marvel Comics’ major continuity events (under the guise of non-intervention policies), but it also has the positive knock-on effect of adding layers to the franchise’s narrative.

Storm knows that even if the British government acquiesces to her request, there would not be enough time to go through the proper protocols as the Terrigen cloud wave is 40 minutes away from Ramrod and Ruckus’ prison cells. So the negotiations is in essence a distraction to a jailbreak. Storm is telepathically coordinating an extraction team consisting of a number of other mutant superheroes, named Magik, Nightcrawler, Jean Grey, Forge, and Old Man Logan (the latter being a curiously-named character about which we have written previously).

The team has been tasked to discreetly extract the two imprisoned mutants using their various powers, which among them include telekinesis, psychokinesis, enhanced senses, and the most useful one, teleportation. The main hurdle is a nullifying field in the prison that disables any power from within the prison walls, so they can teleport into the prison, but not out.

The second story is a much shorter skit involving the mutant called Forge, and the newly-awakened Inhuman child Lunella (also known as Moon Girl). Both are hard at work building a rocket ship out of normal household items and things fished out of dumpsters. Forge is a mutant who has the questionable superpower of “super-engineering”, as he calls it (and the character has indeed manufactured for himself advanced robot limbs to replace those lost in battle) and Lunella is an inhuman who is equally gifted (claiming that her schematics for the rocket are a result of reverse engineering ancient alien technology.) To Forge’s consternation, Lunella’s brilliance is completely natural and not a result of her Inhuman lineage (her Inhuman powers very oddly has something to do with “switching brains” with a red tyrannosaurus rex at inopportune times.)

The pair’s working area is directly on the path of the Terrigen cloud (which we assume puts this sometime before or after the events in the previous story, as Forge is part of the prison extraction team). Lunella is safe because she is an Inhuman who has already been exposed to the Terrigen cloud but Forge, being a mutant, is in serious danger. The two are caught unaware and surrounded by the cloud, and their only escape is the rocket ship that they have built. The problem is if it will actually work, or was Lunella just pulling Forge’s artificial leg?

Both stories in “Extraordinary X-Men” Annual #1 are lighthearted reads, despite the serious underlying themes at play in the first story. There is nothing in the stories that will have serious ongoing ramifications within the labyrinthine X titles’ continuity, as the comic is meant to be a stand alone read. In that regard it has fulfilled its purpose. Our singular criticism of this publication has nothing to do with the writing, but a concern over the publisher’s handling of the property.

We share British writer Warren Ellis’ view of comic books, most famously espoused in his 2001 text, “Come in Alone”, that each and every individual issue of any periodical comic book must be instantly accessible and comprehensible to a new reader in order to be commercially viable outside the small niche of long-term fanatics. Jargon and obscure back-plots should be bleached from the plot and dialogue. We see this as essential to the long-term survival of the US superhero genre.

This is notwithstanding the springboard effect of the present popularity of Marvel Studio’s superhero motion pictures, which we assume, like any a fashion, will have limited longevity no matter how sophisticated and clever the storylines and special effects. With that position firmly in mind, we have discussed in a previous article why Marvel Comics’ strategic “All New, All Different” approach to attracting new readers can be confusing.

“Extraordinary X-Men” Annual 1 #1 shows why this tactic of shaking up the individual properties by introducing massive changes and roster shuffles, is worse: despite the light and relatively uneventful plot found in this comic, people who are not updated with the franchise will be completely lost. To the new reader, or the old hand who has not kept up with the X-titles, it is weird that several of the characters are much older than they should be, and why some are alive when it has previously been clear that they are dead. And only readers who have kept up with another Marvel Comics title, “The Inhumans” will understand what the Terrigen cloud is and why it is sweeping across the globe.

“Extraordinary X-Men” Annual #1 is tightly written and in some places, genuinely funny. But to get the full plot, you must research. That is counter-productive not just to the publisher’s interests, but to interests of the US superhero genre. If it cannot gain new readers and expand the core, then, like the X-Men themselves, genuine madcap evolution within the American comic book industry, leading to leaner and more efficient predators, will drive superheroes into extinction.