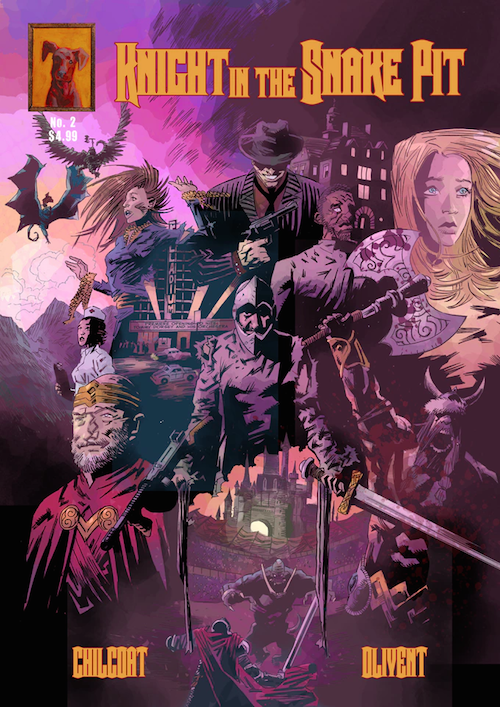 We have previously, favourably reviewed Knight in the Snake Pit #1 back in May 2017. This is the second issue from writer and self-publisher, Kevin Chilcoat.

In our previous review, we noted how Mr Chilcoat blurred realities with, frankly, impressive plotting and dialogue skills. The main character, Allistair Ward, is a mental patient in the 1920s in one universe, and a dragon-riding knight in another. Borrowing a leaf from Stephen Donaldson’s Thomas Covenant fantasy novels, it was not clear in issue one whether the knight and his castle-surrounds were real or not. The likelihood seemed to be that Allistair was delusional and that we were along for the (dragon) ride.

In this second issue, that ambiguity is torn away. Allistair and his dragon both, surprisingly, suddenly end up back in the mental ward. Allistair tells his dragon off for incinerating a nurse, and the dragon, peeved, flies out through the roof, leaving a massive gaping hole. Allistair also still has his sword, and he makes short but reluctant work of the other nurses who come to subdue him. Limbs fly off, gushing blood. Mr Chilcoat makes it clear that Allistair is no psychopath: at the conclusion of the fight, Allistair vomits at the sight of the carnage he has wrought.

On the issue of characterisation, throughout the two issues, Allistair is rendered as a very likeable if unstable man. For example, he later kidnaps a female nurse named Henderson, threatening her death to those other guards who try to stop him, but simultaneously sotto voce whispering apologies.

When Allistair flips back again to the realm of fantasy, the king who would have Allistair as his champion, Clarence, is very angry that Allistair’s dragon has disappeared. In order to coerce Allistair into procuring the dragon’s appearance, Allistair is cast into a gladiatorial pit.

There, Mr Chilcoat deploys some sardonic humour. A failed “Captain America”- type shield throw fails miserably and anti-climatically (a real chuckle to readers of superhero comics), and Allistair is beaten to a pulp by eight mercenary warriors. But he is not killed: the king has ordered Allistair to be in a position where he needs his dragon to save him, but where he is not actually murdered by his assailants.

We are reminded that the plot of the story is a fantasy when, by way of extra incentive to Allistair to produce the dragon, King Clarence releases a tusked and tattooed giant called The Krox. On his way into the pit, the Krox decapitates an arena worker. It is all looking very bad for Allistair.

But it evolves that he can, with concentration, will himself back to the 1920s. Allistair finds himself in the possession of a tommy gun (more on this below), and back in the pit, Allistair guns down the Krox and also the eight warriors who beat him up. As Allistair is released from the arena and leaves the city, the threat that the king feared materialises: a flotilla of viking ships approach within the city’s bay, accompanied also by three giant, manned mechanical birds of prey, circling downwards towards the arena. Mr Chilcoat leaves the issue dangling with the climax of invasion.

The plot involving Allistair back in the 1920s is perhaps the more engaging of the two parallel stories. Determined to find his lost daughter with the assistance of Nurse Henderson and her Cadillac, as well as fellow mental patient Felix, Allistair finds himself back at the asylum looking for clues. But three gangsters have shown up, apparently looking for Allistair. A furious shoot-out is how Allistair comes to have a tommy gun. It is well-executed and would serve well as a stand-alone story, in the sense that it does not actually need the fantasy to succeed as an engaging tale of Prohibition-era crime.

It also raises many questions. Why is Allistair the target of murder at the hands of an organised crime boss? Is Nurse Henderson, far too willing to let Allistair escape and driving a flashy and expensive Cadillac, part of the gang out to get Allistair? Are the three gangsters connected to the third metal eagles back in the fantasy world?

While the plot is fascinating, the dialogue and wry humour are entirely engaging on a different level. Setting aside the aforementioned flunked shield-throw, here are the three best lines:

1. Allistair, Felix and Henderson pull up at an Art Deco take-away food joint in the Cadillac. A waitress runs out to take their order, and sees Allistair in the back seat, his face smashed up by the warriors in the pit, and wielding a bloody sword. “Do you have any specials?” he asks.

2. When speculating as to his fate upon returning to the asylum, Allistair notes to Nurse Henderson, “If anything happens to you, they’ll most likely throw me back in there. That wouldn’t be too bad as I’ve already got my bed made the way I like it.” (Perhaps Allistair is a little mad after all.)

3. King Clarence furiously questions Allistair as to the location of his dragon. “You know, I’m just not sure,” says Allistair. “Not sure?!? It’s your dragon!?!” replies the King. “You should tell the dragon that! That thing is a complete asshole!” The muddle of 1920s American slang in a sword-and-sorcery setting is jarring and works beautifully to accentuate the differences between Allistair’s two worlds.

As they make their way to the Cadillac to escape into the city, Allistair says to Nurse Henderson, “I don’t know about you but I’m excited to see how this turns out.”

So are we. The Knight in the Snake Pit #2 is a Kickstarter funded comic and can be found here.