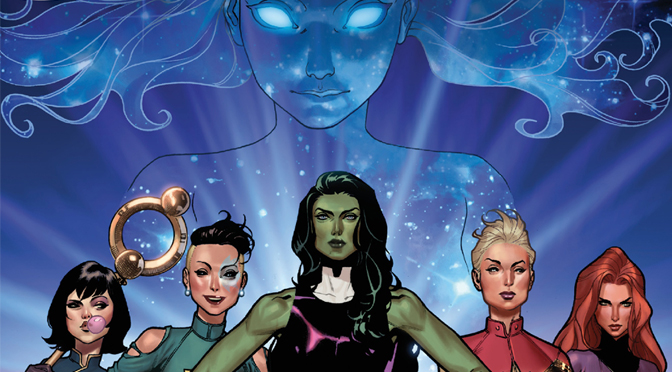 An American publisher of superhero comic books, Marvel Comics, is presently engaging in what some comic book retailers have described as “publishing carpet bombing”: flooding the market with numerous first issues of new titles. Within many of those new titles, a common thread emerges: the repeated extension of the “Avengers” comic book franchise.

The “A-Force” is another Avengers-orientated spin-off book from Marvel Comics’s 2015-16 Secret Wars crossover event, written by G. Willow Wilson (and more on her below). This event, as we have explained in other reviews, in essence destroyed majority of the publisher’s different continuities and consolidated the survivors into a single reality ruled by an omnipotent villain called Doctor Doom. The single reality was dubbed Battleworld. One of the places within Battleworld is an island paradise called Arcadia, which is protected by the “A-Force.” This is a superhero team of exclusively female characters drawn from Marvel Comics’ extensive intellectual property asset base. It consists of, amongst many others, the following characters: Medusa, She-Hulk, Captain Marvel, Dazzler, Sister Grimm, and a mysterious and gender-fluid cosmic being called “Singularity.”

The new title, “A-Force” #1 starts after the conclusion of Secret Wars, which saw Battleworld collapsing after Doctor Doom was defeated. The story posits that reality is remade into something that was more or less in line with the previous status quo.

For reasons still unknown, the character Singularity appears in this new reality while retaining memories of her time as a member of the A-Force, which is odd because a) none of the characters from Battleworld remember their existences within Battleworld and b) Singularity supposedly died during the Secret Wars event.

It should be noted here that the character is described as a “cosmic entity”. This is Marvel Comics’ vague classification of characters with power sets that encompass everything from powerful aliens to god-like presences and even actual gods. These sort of characters help give Marvel Comics’ continuity a very grand sense of scale, significance and awe which has over many decades now been very appealing to readers.

The story proper starts with Singularity appearing on the current reality, conveniently near an orbital satellite operated by another superhero team called “Alpha Flight”. This satellite is currently under the command of Singularity’s former teammate Captain Marvel, albeit a rebirthed version who like the other characters has no recollection of anything that happened in Battleworld.

Singularity teleported inside the station and introduced herself to Captain Marvel and her crew, despite already being somewhat aware that this is not her world and that nobody would recognize her. Often this sort of situation is a vehicle for a brawl between two superheroes. But Singularity is depicted as having the persona of an innocent child, while Captain Marvel is a sensible and rational commander, and so no fisticuffs happened. Singularity still ends up in handcuffs until Alpha Flight verifies her story.

All of this is soon interrupted by a mysterious red creature that appeared and started attacking the station, with its target being Singularity. The comic has not yet revealed who the red creature is, and Singularity claims to have no idea but refers to it as “Anti-Matter.” Captain Marvel unsuccessfully tries to fight Anti-Matter while Singularity tries to get away, unknowingly luring the red creature towards Earth. The fight, in chronological order, ruins a structure owned by the Inhumans, crashes into She-Hulk’s office while the character is in a meeting in her capacity as a lawyer, and then runs into Medusa and a small army.

The issue ends with a cliffhanger as Medusa, who does not recognize Singularity just like everyone else, once again cuffs the cosmic being and in a decidedly Machiavellian strategy, offers to surrender her to Anti-Matter as a way of avoiding further conflict.

Marvel Comics might like these first issues to capture new readers, and to thereby increase overall sales. But like many of the recent first issues from Marvel Comics’s relaunch of key titles, “A-Force” is hindered by its reliance on readers’ knowledge of prior events in the continuity. This significantly mitigates the publisher’s ability to ensnare a new generation of readers. There is no form of introduction to the characters, and the issue reads a little like a car chase scene, albeit without the cars. For existing readers, however, especially those who are fans of any of the main characters, the pacing is quite fast for a first issue, a benefit of its reliance on past continuity, and the story finds a good balance between action and comedy.

The rationale for using exclusively female characters is not obvious. Super hero titles featuring female characters historically do not do well (setting aside DC Comics’ “Wonder Woman”, which has been in production for decades), perhaps due to a failure of the mostly male readership of superhero comics to identify with the main character. Marvel Comics have tried a team of female characters before, most recently with the “The Fearless Defenders” (2013) by Cullen Bunn. This series, despite the intriguing premise of focussing on the interactions between a street wise cyborg and an Asgardian goddess, suffered from terrible plots and dismal characterisation. It also introduced bisexuality to one of the characters, Valkyrie, apparently only as a form of titillation to a teen male readership. The final issue of “The Fearless Defenders” depicted an enormous ensemble of exclusively female characters fighting a threat, for no real reason other than to assemble almost of all Marvel Comics’ female characters in one issue. It was staged, forced and deflating.

“A-Force” for its part is not seeking to tempt a young male audience with images of women in tight clothing, nor is it drawing upon any feminist themes arising from an aggregation of strong female characters. The writer, G. Willow Wilson, is an acclaimed writer and an intriguing person – her blog is located here, and as of today was not afraid to publicly challenge on Tumblr the motives of the chief executive officer of her present employer, Marvel Comics, regarding his contribution to Donald Trump’s political campaign, as reported on The Mary Sue. A remarkably fearless and principled thing to do. She also writes “Ms Marvel” for Marvel Comics. “Ms Marvel” is a comic about a Muslim female superhero, and it has created significant interest beyond the traditional comic book readership. Ms Wilson’s focus is on pragmatic writing, and this is evident in this title. “A-Force” #1 is just a fun read and has the potential for commercial success, a remarkable thing for an all-female superhero team series.