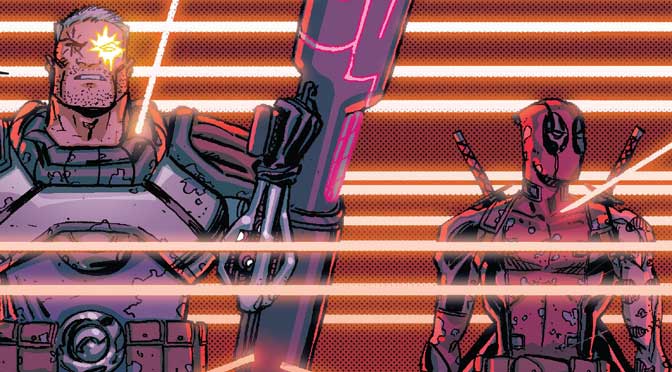 In 2015, the Deadpool motion picture adaptation that featured actor Ryan Reynolds’ larger-than-life portrayal of the psychotic, near-unkillable mercenary was so successful that it rejuvenated the franchise and attracted a new generation of fans outside of comic books.

But US publisher Marvel Comics (the owner of the Deadpool character) acted in an entirely typical way. The publisher’s reaction to the character’s newfound mainstream success is to carpet bomb their publications with appearances of Deadpool, with the character showing up in most of their popular titles either as a one-off guest, or, in the case of The Avengers, a new team member. The overexposure of Deadpool has reached a point where the mature-targeted character has made regular appearances on kid-friendly Marvel cartoons on the Disney XD channel.

The Despicable Deadpool series seems to be a way of addressing that overexposure. The comic ever so slowly takes the character back to his roots as an antihero. The in-story explanation is that Deadpool has had enough of trying to be a hero, and has gone back to being a mercenary for hire.

Issue #290 features Deadpool teaming up with the gun-toting, time-traveling psionic mutant Cable, who he was paired with in the ongoing title Cable & Deadpool (2004-2008.) Despicable Deadpool #290’s story is part of a larger story arc, but not completely inaccessible to someone who is just jumping in (provided that the reader is already vaguely familiar with Deadpool’s background and personality.) Any comic featuring Cable means that the plot will almost always touch upon both time-travel and cloning.

The dialogue does a good job of explaining the story. Deadpool has been contracted to kill Cable, by Cable’s evil clone, named Stryfe. But instead of just going ahead and fighting each other to the death, the duo work together in order to help Deadpool complete his contract by bringing Cable’s actual heart back to Stryfe.

The method they go about doing this is where things get interesting. Cable, being a time-traveler, takes Deadpool to an alternate timeline that serves as a pit-stop for all the time-traveling Cables from different parallel realities. The comic shows us some of these alternate-reality Cables, including versions that do not even look human but still bear his trade mark scowl and glowing eye. This borrows somewhat from Alan Moore’s work on Supreme (#41-56, then published by Awesome Comics) featuring multiple time-line versions of Supreme gathering together. Mr Moore received the 1997 Best Writer Eisner Award for his work on Supreme, and so the story should be known to writer Gerry Duggan.

Cable’s plan is to kill the future version of himself, not an alternate reality Cable. Cable will then give the heart to Deadpool. Deadpool can bring back a genuine heart without meddling with any other timeline. Although this sounds head-spinning, the obvious alternative of mucky plot device involving retroactive timeline changes would have been worse.

The actual assassination is also fairly straightforward. Deadpool and Cable find old, balding, gap-toothed senile Cable at the end of time, waiting to catch a glimpse of the moment when reality ends, and kill him.

The true twist of the story arc, why Stryfe needs the heart, and why Cable is willing to help Deadpool, are subsequently revealed at the comic’s last page. Stryfe is planning to clone a new batch of Cables, and Cable wants to stop this from occurring.

Of course, one has to wonder why Stryfe, who is a healthy clone of Cable with access to advanced technology, does not just take samples of DNA from his own fingernails or hair. Perhaps the reason will be revealed in a future issue. Or perhaps Mr Duggan just did not think of this.

Notwithstanding this, Despicable Deadpool #290 is both a decent read and a functional jumping-on point if for those interested in either Cable or Deadpool. Notably, Deadpool’s overdone trademark fourth-wall breaking humor is absent. That helps the comic focus on telling a solid, cohesive story.

Extraordinary X-Men #10: Hiding the dust of time under the rug