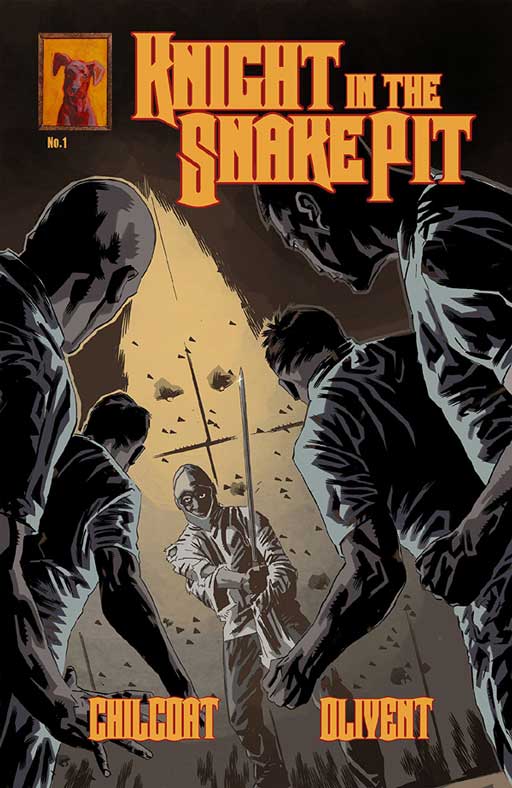 This is the second in our week-long series of review of independently-published comics, coinciding with Free Comicbook Day. On this occasion, we look at the psychological tale entitled “Knight in the Snake Pit”.

In the United States, over a thirty year period ending in the 1950s, approximately 40000 people were the subject of lobotomies. The concept of using a small pick to destroy brain tissue in and around the thalamus as a means of curbing aggression was popularised by a psychiatrist named Walter Freeman. It led to a gruesome population of grinning, brain-damaged mental patients, including, famously, Rosemary Kennedy, the sister of US President John F. Kennedy.

On the face of it, “Knight in the Snake Pit” #1 is set in a mental asylum in the 1940s. The protagonist is apparently named Allister Ward, but it becomes clear that even he is not entirely sure of that. Brutal psychiatric methods such as insulin comas and “electroconvulsive therapy” have so fragmented Ward’s mind so that he is no longer sure what are “Nazis”, what is “fishing”, and whether or not he has a much beloved daughter. Eerie initial scenes from the opening pages of this comic depict Ward strapped naked to a stretcher, wondering who he is and how he has come to be there. In a moment of black humour, Ward spots an unwelcome visitor:

Monologue: “Why is this spider crawling towards my penis?”
Ward: “Get away from there you little shit!”

The story is peppered with wry shards of humour (upon hearing the oddly lucid rant of an inmate, Ward reaches the conclusion, “He seems like a reliable source”). Some of the dialogue is extremely dense, to the point of being reminiscent of the remarkably text-heavy dialogue of Archie Goodwin in “Manhunter” (DC Comics, 1974). Comic books typically showcase the skill of the writer by the restrained brevity of the dialogue. The words should not unnaturally compete for space with the art. But here, it works: the long diatribes describe burbling states of mind.

One of those who rant at length is a fellow inmate, but the other is King Clarence, the smiling but slightly sinister monarch of a seaside kingdom. Ward suddenly finds himself in this fantasy kingdom, where he has been imprisoned in a dungeon. Upon being summoned by the king, Ward stumbles across an elevated stone footbridge and wants to pause to look at the fantastical view. “Let him look,” says a guard. “It’s been some time since he has even seen daylight.” But is the daylight even real?

King Clarence welcomes Ward, expressing regret for throwing him into the dungeon. “My boy! You’ve been in the dungeons too long and aren’t well.” It evolves that King Clarence faces invasion from an enemy and the possibility of dismemberment if defeated. King Clarence’s daughter has also been captured and needs rescuing from rape and torture. Ward, it seems, is the kingdom’s only hope. “What I’ve seen you do,” King Clarence says to Ward, “is not anything a man can do. You’re a rider from the heavens. You can speak to them.” What this means, and who “them” is, is not immediately apparent to either the reader nor to Ward.

Ward nonetheless joins a toast to his newfound rapprochement with King Clarence, only to find himself fainting. Suddenly Ward is back on the electroshock table suffering convulsions. Did he even drink the wine or is it a fantasy? “Have one of you been drinking on the job?” scowls a doctor at the shock therapy crew when he suddenly smells alcohol in the room. Writer Kevin Chilcoat plays with the reader’s sense of reality as the therapists play with Ward’s head.

Finally, back amongst his fellow patients and in a fight, Ward appears to have gouged a man’s eyes. Strapped to a stretcher again, bound in a straight jacket, Ward looks up sees the doctors ready the pick and hammer at the space behind his eyes. Ward is abruptly jarred back into the fantasy world. Assisted from the floor by King Clarence, Ward is then bathed by two women, and thereafter strapped into chainmail and lead to a mysterious door where he is told by two sarcastic and flippant guards that he faces unavoidable death. The door opens and Ward finds himself pushed by the guards into a walled cage occupied by an enormous and evil-looking dragon. The dragon’s fire spews over Ward’s shield.

But as Ward, terrified, shrieks at the dragon to stop, the dragon hears him and obeys. The dragon is Ward’s dragon and loves him. It evolves that Ward can ride the dragon, and he immediately sets off to destroy the king’s enemies.

Is the medieval fantasy real? Is the dragon symbolic of Ward’s mental disease? Is the rescue of the princess the projection of Ward’s desire to be reunited with his daughter? Did the lobotomy push Ward into this heroic fantasy? Ward’s monologue gives us the answer:

“I don’t even know what sort of future I have. All I do know about this moment is that I’m safe.”

This is a creepy, poignant story, filled with chilling ambiguities about reality. Both the subject matter and some of the style is reminiscent of American director Martin Scorsese’s motion picture “Shutter Island” (2010). Mr Chilcoat’s high degree of craftsmanship in creating this tale is self-evident.

“Knight in the Snake Pit” #1 is available on Comixology.