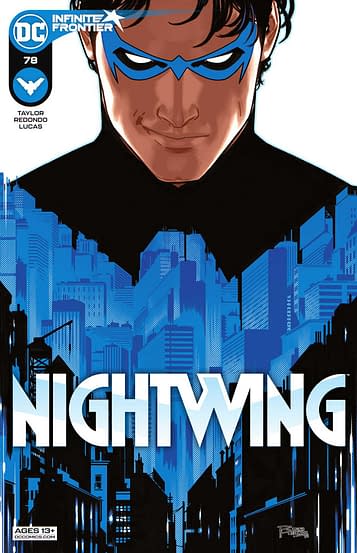 Tom Taylor is, at least for me, a very inconsistent writer in terms of quality. From his excellent Suicide Squad run to his confused but interesting Superior Iron-Man and the forgettable and messy DCeased, he has shown that while his basic premises and ideas tend to be good, he’s not the best at executing them properly.

Nightwing #78 essentially proves my point that, under the right circumstances, Mr Taylor can be an excellent writer. Not only is this issue a very, very promising start to a new era for one of the best members of the Bat-family, it also works as a quite heart-warming and well-thought self-contained story. From the perspective of a veteran Nightwing fan, this issue is an outstanding introduction (or re-introduction) to the character that sums up everything a new reader would need to know about Dick Grayson.

The basics are all there. Through a flashback, this issue establishes who Dick is, what happened to his parents, what relationship he has with Bruce and Alfred, as well as Barbara Gordon’s place in the Bat-family. The book also manages to introduce Sonia Zucco as one of the two main villains of the story. Yet at no point does it feel like it is trying to introduce too many elements at once. Mr King applies the “show, don’t tell” concept to perfection.

This book would not be as astonishing as it is without Bruno Redondo’s pencils. Mr Redondo has a very clear and concise style that makes this comic very easy to the eyes. The action flows very well even if it is constantly shifting perspectives, something that in less competent hands would become a detriment and not a feature.

The character design for Barbara Gordon is also very pleasing. In this book she does not look like a super-model. She is a person with freckles. She is still attractive, as many comic-book characters are, but she not the stereotypical improbable beauty of superhero comics.

The book begins with a flashback about Dick Grayson, our main character, getting into trouble with local bullies. After a short fight, Dick is saved by Barbara and her father, Detective Gordon. Gordon gives them both a ride to Wayne Mansion. There we meet Alfred Pennyworth, who is at the emotional core of this issue. In only a page, Mr Taylor and Mr Redondo are able to convey the relationship between Alfred and Dick to perfection. Alfred believes Dick to be able to help people in many different ways, not only through super-heroics.

(As a side note, I’ll add that I find Mr Taylor’s Alfred very endearing in the pages of DCeased as well, even though I don’t particularly like that book. It seems that Mr Taylor likes the character a lot, and he poured all of that love in this particular depiction of the classic DC character.)

We bear witness to a demonstration of Dick being a good person even without a mask, followed by a heartfelt conversation with one of his paternal figures. This little conversation ends the flashback, and the reader is brought back to modern day Blüdheaven, a fictional city in the DC Comics’ shared continuity.

This sequence serves as a transition from Dick’s youth towards his current life. Dick spends his life mostly protecting and saving others even if it literally hurts him, as shown when a dog he just rescued bites him in the hand. Dick decides to take care of the animal until he can find a vet, and he takes the dog to his flat.

The book then proceeds to introduce the two main villains of what will be Mr Taylor’s run: mobster Blockbuster and the new mayor of Blüdheaven, Melinda Zucco. This last character is particularly interesting. She is the daughter of the man who murdered Dick Grayson’s parents. I assume that will become relevant as the series goes on. Mr Taylor slowly introduces the cast in this soft reboot, because they’re not dependent on the previous run. I look forward to see what Mr Taylor does with these characters in future issues.

Dick returns to his apartment to find Barbara Gordon waiting for him inside. I’ve always adored the relationship between these two. I honestly hope the character is part of the supporting cast for this run, because their interactions in this issue are very quippy and full of life. Mr Taylor manages to sell you on the idea that these two have been fighting crime together for a long time, and their relationship is built on a core of diamond-hard trust.

After basically forcing Dick to adopt the dog he had rescued, Barbara gives Dick his part of Alfred’s will. The butler died at the hands of the villainous Bane during Tom King’s Batman run. Barbara was chosen to be the executor of his will. As explained in a letter Alfred left for Dick, Alfred was in ownership of a large amount of money he did not need for his everyday life. Alfred gave most of it away to charity, but he left a generous sum for Dick to use as he saw fit, hoping that he would make the world a better place in his own way. As Dick reads the letter, Barbara reaches out to him and allows him to hold her hand, knowing how much it must hurt to be reading what is essentially the last thing Alfred will ever say to Dick.

This moment is very beautiful. It conveys a lot of strong emotions solely through visuals (allowing the reading of the letter to go uninterrupted for the entire page) and it bookends the themes of the issue. Alfred is telling Dick one last time that he believes in him and his ability to do good. Visually, it references their conversation at the beginning of the issue by bathing Dick in the same warm yellow light that was present in the original panel. This time Alfred is only there in spirit.

The last page teases Zucco as a villain once again, and it implies she has not forgotten about Dick.

Overall, however, this issue is why I believe that superhero comics can be much more than costumed people punching each other. It has amazing visual storytelling, beautiful colours, and most important of all, an emotional core that elevates the story. It also fleshes out the significance of Alfred’s death before he is inevitably brought back during some DC reboot event. I recommend this issue for both long-time fans of Nightwing and people who are completely new to the character. I only wish all jumping-on points were as masterfully written and beautifully drawn as this one.