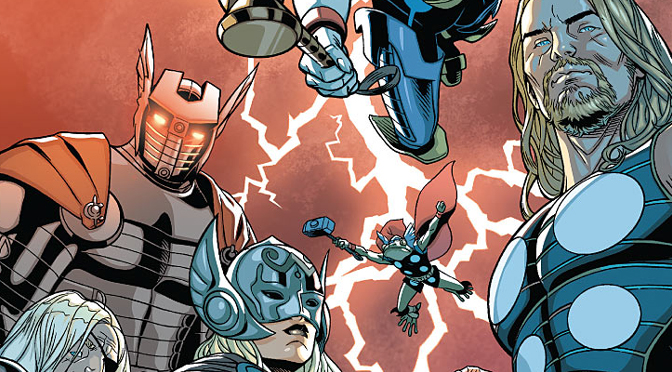 In Scandinavian mythology, Thor is the god of thunder. The concept of a powerful, hammer-wielding entity fighting for good against evil has been commercially exploited by Marvel comics since 1962, with considerable success. Many of the concepts inherent to the character have become well-trodden paths for writers. This story is however new: it is a detective murder mystery, albeit an esoteric and confusing one.

The story, written by Jason Aaron, is set after a recent Marvel Comics’ cross-promotional event called Secret Wars. The plot of this was to milk the goodwill in the company’s various realities by consolidating the survivors of each razed continuity into a single one ruled by Doctor Doom, a long-standing villainous character rendered omnipotent.

In the new reality, various characters from different continuities coexist regardless of how unlikely it was given that universe’s particular logic. The characters are policed by an army of Thors, which consist of various characters that are or have been wielders of the enchanted hammer Mjolnir, even going so far as to include several time-displaced versions of a single character.

The quality of Mr Aaron’s “Thors” mini-series can be a challenge to assess objectively, because it is on the one hand a well-written detective story with a serviceable plot twist, but on the other hand is also somewhat crippled by its dependence on the Secret Wars cross over event and prior knowledge of the Thor comic book franchise. As a consequence, it is vastly inaccessible to new readers, but entertaining to an established audience.

The main protagonist is a veteran Thor named Thorlief. This is the reality-displaced Thor from Marvel Comics’ “Ultimate” continuity, and his partner, the reality-displaced Beta Ray Bill (an alien version of Thor, first created in 1983). The two Thors have a reputation as two of the best that the corps has to offer, with feats such as taking down a dozen versions of the immensely strong character the Hulk at the same time (which earned Thorlief a reputation as the “Ultimate Thor”) and solving multiple big cases that have cost previous Thors their post.

If this sounds more like a police drama than a title about Teutonic thunder gods, then that assessment is entirely correct.

The duo’s current case is a multiple murder case involving the murder of women. The Thors refer to the case as an “allthing,” which isn’t explained much other than calling it the kind of case that would prompt the attention of the godlike Doom himself and the expulsion of the assigned Thor, upon failure of that assignment, from the corps.

The threat of being “dehammered” (provoking images of being de-sexed) serves as the primary motivation for Thorlief, as opposed to a desire to mete out justice. This adds some depth to the character – Thorlief is spurred by things other than altruism. But the character nonetheless has a desire to do what is right – for some unexplained reason, the character is compelled to find the culprit for the murders out of a nagging feeling of familiarity with the victims. Or rather, with the victim: the first main twist in the story is that all of the victims are the same person: they’re all different reality versions of Jane Foster, missing their eyes.

If already confused, the inexperienced reader now plummets into an abyss of convoluted continuity. Jane Foster is the long-standing love interest for Thor, with a first appearance in 1962. Presently, the character is herself a female version of Thor. “Thors” gets trapped between being dependent on prior knowledge of comic book continuity, balanced against a loss of suspense for familiar readers.

Further, this plot of the serial deaths and eye-gouging of an important female character should properly upset those who followed the important critical website “Women in Refrigerators”, founded by writer Gail Simone in 1999 and currently located (as an archive) here. It is very disappointing that the otherwise talented Mr Aaron perpetuates a gender violence problem first ventilated almost two decades ago.

Setting aside the endemic problem of male writers writing about the mutilation of female characters, “Thors” is salvaged by Mr Aaron’s excellent handling of the pace and direction of the story, tuning the improbable murder mystery so that it is engaging, irrespective of knowing some of the missing pieces to the puzzle. Adding texture to the story are the various characters, which will be a bonus to those who are knowledgeable about the Marvel Comics’ myriad continuities.

Thor’s long-standing opponent, the god Loki, is in the amalgamated universe of “Secret Wars” relegated to a vagrant living in boxes in a random alley. Here, the character serves as Beta Ray Bill’s informant. When Beta Ray Bill is murdered, Loki was the only witness, and eventually became the only suspect. Thorlief however follows several clues and locates the place where all the dead Jane Fosters have been dumped, courtesy of Loki’s information.

While the detectives deduce why the eyes of all the victims have been gouged out and understand the motive, the characters do not get the privilege of discovering the identity of the culprits, as the killers launch an ambush. Here the story parts of traditional detective tales. With the likes of, say, “Sherlock Holmes”, the canny reader always has all of the clues before him and the opportunity to solve the crime before the detective. The appeal of murder mysteries is to try note the thing which has been overlooked, and solve the crime. In “Thors”, both the methodology and the motivation of the killers is intended to disturb, but Mr Aaron fails to make the climax of the plot convincing: there is no opportunity for the reader to outwit the detectives. The eyes serve as clues to the true and proper state of Marvel Comics’ continuity, and as it turns out, looking into the eyes of a Jane Foster jogs a Thor’s memory that something is amiss. The killers want the status quo preserved. No reader could possibly anticipate that flossy plot development. There is no observation leading to resolution. In that regard, this title fails as a detective story.

There is, of course, a requisite fight scene as the Thors become divided by the truth, with one side choosing to fight for the truth while the others choose to defend Doom’s reality. Confusingly, even the current Thor, Jane Foster, makes an appearance and sides with the protagonists. The mini-series ends with the victorious faction flying into the sky, intent on taking the fight to Doom. The final page features the poignant image of Thorlief’s hammer falling back to Earth and waiting for its new wielder, indicating that the war against Doom does not go well. This is reminiscent of Robert Harris’ outstanding novel “Fatherland” (1992), where discovering and preserving the truth of the horrors of a regime will take its toll. The hero of the story, it seems, does not survive.

Mr Aaron writes very well. This is notwithstanding that the premise and plot are hampered by:

a. its dependence on the Secret Wars event and all the baggage decades of comic book continuity brings;

b. the almost arbitrary mutilation of a female support character (over and over); and

c. the failure to follow the basic paradigms of detective fiction.

Somehow Mr Aaron’s exceptional storytelling saves the day. Mr Aaron can take a flimsy plot and an uninteresting twist, and wrap it up in an engaging crime story full of storm gods. We hope that Mr Aaron has done as he was told by his editors and buttressed these jarring story elements with very good writing, rather than be entirely responsible for formulating such an eyebrow-raising plot.