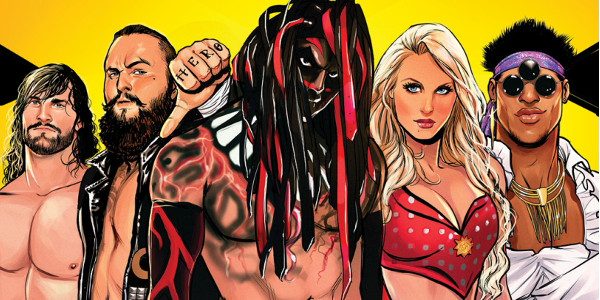 WWE: NXT Takeover – The Blueprint is a new comic book about professional wrestling,from American publisher BOOM! Studios, which leverages the globally popular sports entertainment brand, World Wrestling Entertainment (WWE). The comic’s title comes from the story’s focus on WWE’s sub-brand NXT. NXT is where newly hired wrestlers are trained in the WWE’s house style, before they get drafted into the main WWE brands, RAW and Smackdown.

Aside from the NXT brand, WWE: NXT Takeover also serves as a tribute to the late American professional wrestler Virgil Riley Runnels, Jr., best known for his professional wrestling career under the pseudonym “The American Dream,” Dusty Rhodes. Before his death in 2015 from kidney failure, Dusty Rhodes worked as the backstage booker and producer of NXT.

There’s very little story to be found in WWE: NXT Takeover. It is structured instead as an inspirational look at the role of Dusty Rhodes in the nascent careers of the young wrestlers who cut their teeth in NXT before moving on to the WWE’s main brands, where they eventually became midcarders and main eventers.

The narrative also tries to balance kayfabe and a more realistic look at the business side of sports entertainment. Dusty Rhodes makes his rounds, performing his duties as booker which includes assigning matches, directing interstitials, and mediating between talents. But on the other hand, the wrestlers themselves are rendered in the pages as their on-camera characters. Bray Wyatt is skulking in the woods at night with his cohorts, monologuing and plotting like a villainous cult leader, while in-ring rivals Seth Rollins and Jinder Mahal bicker and come to blows backstage.

The audience for this comic is clearly people who are already invested in the WWE. The title entirely relies on familiarity with the characters and their history. There is nothing in the story that will be relevant to a reader who does not care about professional wrestling. The story drums up significance in the would-be superstars, but the references will be completely lost on non-fans.

The value in the comic is the tribute, the examination of the twilight of Dusty Rhodes’ career as a guiding hand for the business side of NXT. But as a story, it is severely lacking and even self-indulgent. It is made apparent in the final page (via the “To Be Continued…” text) that this is just the first issue in a series. Yet this first issue reads more like a standalone as opposed to a plot springboard.