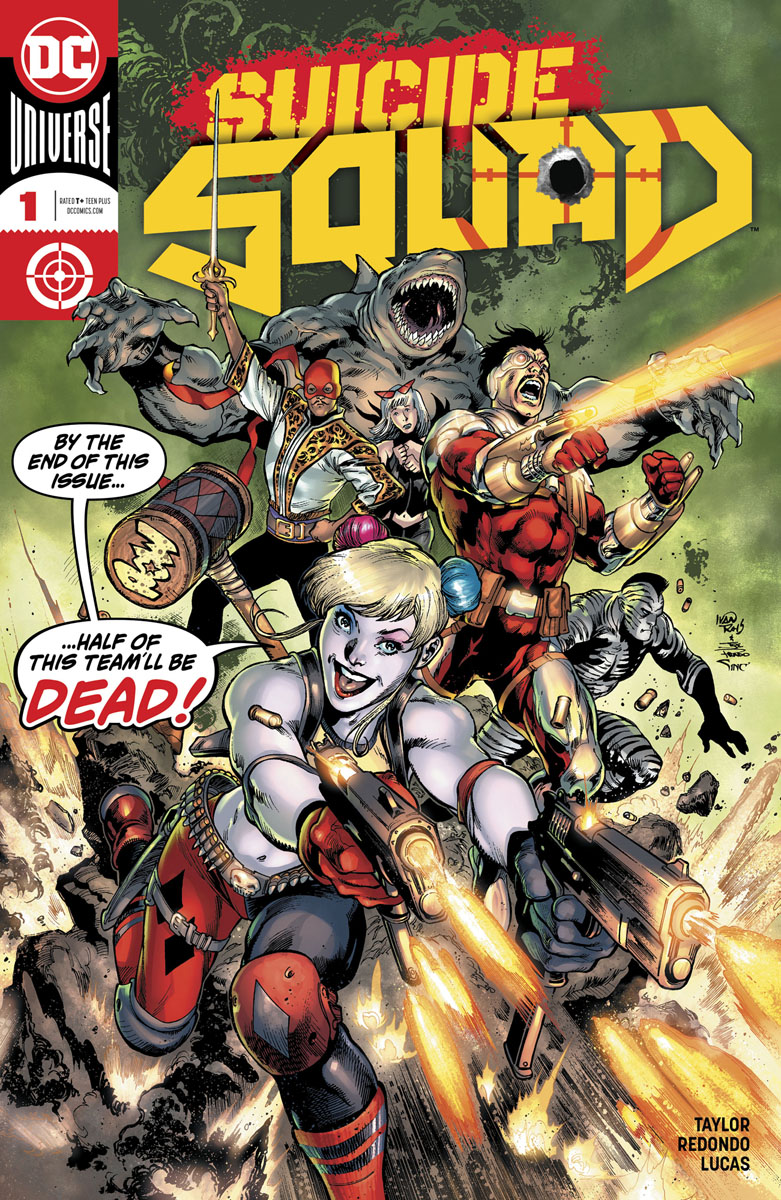 And over thirty years later, DC Comics, one of the two big US publishers of superhero comics, has (for the fourth time?) relaunched Suicide Squad. This critique is of issues 1 and 2 of this newly minted title. (This is not the first time we have reviewed a Suicide Squad story – see, for example, this critique https://www.worldcomicbookreview.com/2018/03/27/suicide-squad-hell-to-pay-1-review/  A retrospective of Mr Ostrander’s original work will be forthcoming later this year. )

This time the cobbled-together team of masked criminals are compelled to stop a band of young, idealistic millennial superheroes called The Revolutionaries.

Leading the pack are two of the mainstays of Suicide Squad: The master assassin Deadshot (we are told he is on the verge of a nervous breakdown, but we are not told why) and the brawler Harley Quinn, an omnipresent character within DC Comics over the past five years or so. The Squad’s ruthless leader, Amanda Waller, is a background player – we are told that she has resigned from her job. (We celebrated Amanda Waller’s 30th birthday two years ago – https://www.worldcomicbookreview.com/2017/12/06/happy-thirtieth-birthday-amanda-waller/ ).

The opening scene of the first issue is near the Western Australian Maritime Museum in Fremantle, Australia. We can see the distinctive domed building of the Museum in the first panel. Missing from the landscape is the retired diesel submarine HMAS Ovens, on dry dock to the south of the museum building.

Instead, we have three new nuclear submarines parked in its place. We are told by Waller’s replacement these submarines have been recently acquired by the Royal Australian Navy from United States defence contractors.

That would be an enormous surprise to the RAN, who in February 2019 signed a USD 35 billion contract to the French shipbuilder Naval Group for the construction of twelve Scorpene-class diesel submarines to be completed in the mid-2030s. Garden Island, across the water from Fremantle, is the home of the Australian Submarine Squadron – why not set the scene there?

And since when is a senior officer of the navy a “general” instead of an admiral or even a mere commodore?  Writer Tom Taylor is an Australian, perhaps best known in his homeland for his work on another submarine adventure, The Deep for Gestalt Comics: his sloppy research on the subject matter of this comic has no real excuse.

The Revolutionaries are captured by the Squad, and turned by the Squad’s new handler, a man named Lok. Lok is the quintessential spook: scarred, in a matte suit, and of the view that his minions are entirely expendable. Off they go to facilitate a failed rigged election of a fictional nation, echoing the United States’ involvement in the installation of Augusto Pinochet in Chile, Manuel Noriega in Panama, and others. The second issue makes it plain that the Revolutionaries have their own agenda notwithstanding miniature bombs embedded into their bodies by Lok.

Artist Bruno Redondo is a long-time creative partner of Mr Taylor. Mr Redondo does a wonderful job in rendering the characters in shadow, particularly The Shark, a menacing villain from the pages of Green Lantern.

But as for the rest of the story? It is far removed from Mr Ostrander’s magic. Mr Ostrander mixed up likeable characters with the detestable, so as to contrast and add depth. Of the cast here, instead, we have a small truckload of posturing blowhards, a callous deep state operative (clearly telegraphed as a bad guy given he detests the Revolutionaries’ attack on a US/Mexican border immigration detention centre), and assorted nut jobs and monsters. The character tension is intended to sit within the awkward amalgamation of two teams who killed half of the other’s members during their first encounter. It has the finesse of mashed potatoes.

One last thing – an editorial fumble and drop. One upon a time, American comic books were filled with advertisements for Saturday morning cartoons, action toys, and Hostess Pies. In these two issues, DC Comics are advertising a new line of comics, plainly orientated towards a young, female, teen market, and each incorporating some of DC Comics’ hallmark character concepts (Green Lantern Batgirl, and Wonder Woman). How does this work in a comic featuring a man’s head being punched through by a cyborg fist, or another man being executed at point blank range? Here is an example: on the left is the execution, and on the right is an advertisement for the adventures of Wonder Woman as a teen: