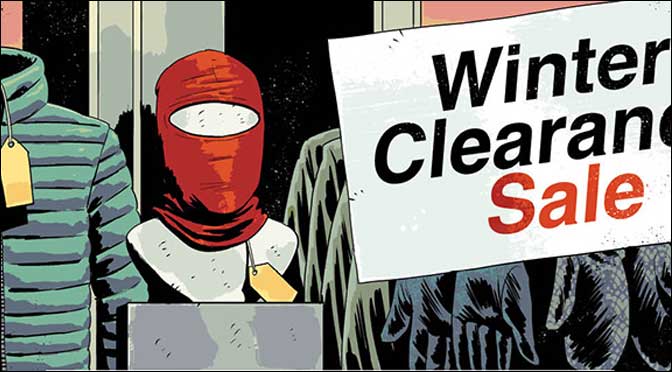 It is hard to think of a more consistent duo in comics than that of writer Ed Brubaker and artist Sean Phillips. Since their first collaboration as part of 1999’s The Scene of the Crime, the pair have produced a film noir-inspired body of work every bit as lethal as their gun-toting characters. Where they go, readers have proved willing to follow with critical acclaim and consistent sales.

It is a reliability that has paid off as the two have recently signed contracts to create exclusively for American publisher Image Comics. As part of their unique deal, Messrs Brubaker and Phillips are able to create without pitching their ideas for editorial approval. Whatever premise they want to pursue, in other words, is guaranteed to print. This is a rare, remarkable and precious freedom amongst the larger players in the American industry, which so often rejects ideas based on crude demographics and projected sales. If successful, it is the kind of deal that Image, a publisher with a history of empowering creators, would be likely to offer talent in the future.

“Kill or be Killed”, the second series to come out of this new deal, finds the creators using their freedom to push toward strange and dark waters. The story follows a character named Dylan, a grad student whose suicide attempt is botched by a demon. As payment, Dylan is compelled to kill one person a month or die himself. “Kill or be Killed” #4 ends the series’ first arc and covers the character’s slow steps into vigilantism and its fallout on both his psychology and personal life.

While the synopsis sounds heavy on the supernatural elements, the paranormal feels refreshingly marginal in this arc. Outside of a few brief appearances and dream sequences, the demon is largely quiet until this issue’s foreseeable, but still incredible, twist. What plays out instead is the human drama centering on Dylan. In a long history of strong characters, Dylan is perhaps the crowning creation of the Brubaker/Phillips partnership. Equal parts unreliable and self-centered, complicated and pathetic, the character feels lived-in and worn down. The reader’s gateway to Dylan is through his narration, some of Mr Brubaker’s strongest writing. As he recounts his origin, Dylan swings between veils of cynicism and bouts of genuine feeling. The result is a character who is not only lying to his listeners, but clearly lying to himself. It is an engulfing perspective in the style of director Martin Scorsese’s motion picture “Taxi Driver”, a point-of-view that washes over readers until they are rolling with Dylan on his sure spiral into vigilante insanity. If it is hard to find him likable, it’s harder still to not find Dylan compelling.

Dylan’s internal and external worlds are rendered perfectly by Mr Phillips, who thrives in creating a snow-laden city that often turns from tranquil to treacherous in the space of a panel. Elizabeth Breitweiser, who has become part of the team since working on Fatale, The Fade Out, and Criminal, provides rich colors to the snow, city, and bloodstains that make up the comic. The art is so good that the only real disappointment of “Kill or be Killed” is a tendency to over-utilize blank spaces for narration next to silent panels. At first, the effect is striking for its isolating quality and for controlling the comic’s pace. As the technique becomes horribly overused in a few issues, however, the empty portions just begin to feel wasted. With issue #4, it feels like a reasonable balance has been found and the paneling otherwise is superb.

As a whole, the first four issues of “Kill or be Killed” finds two of the best creators in comics operating at the top of their game. The result is a noir that balances violence with vulnerability and already ranks among their best work. That Messrs Brubaker and Phillips have found such success with unusual premise and unexpected execution is testament to their unique deal and an argument for creators to operate with less editorial scrutiny. If the results can be this promising, it is a lesson publishers would be wise to learn.