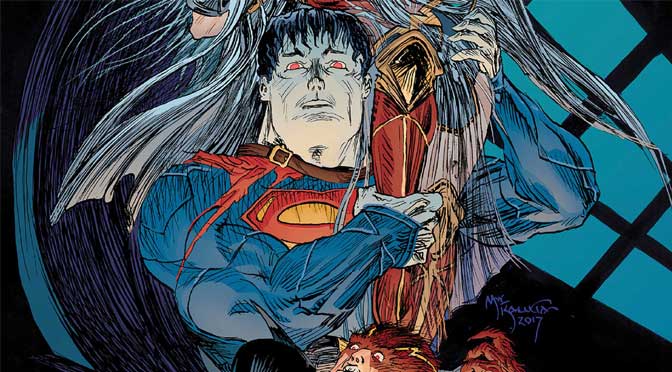 DC House of Horror is a new comic book one-shot publication from American publisher DC Comics. The comic features eight short horror stories that use DC’s popular mainstream superhero and supervillain characters as a narrative base. The title, art, and writing makes it clear that House of Horror is a throwback to the horror anthology comic books that were very popular during the 1940s to the 1980s, and the timing of release of this comic makes it clear that DC is celebrating Halloween with tongue pressed firmly in cheek.

None of the stories in DC House of Horror are part of the publisher’s mainstream continuity, so it does not demand much from the reader outside of basic familiarity with the superhero properties it uses as a theme. Being written by different scribes, it is also a given that quality will vary widely. Most of the stories however provide enough novelty to hold a reader’s attention.

Only one of the stories have the actual superheroes as part of the story. This story is entitled Blackest Day, which is a zombie story envisaging that the entire world, including DC Comics’ pre-eminent band of characters, called the Justice League, all succumb to a zombie virus. It is easily one of the strongest stories in this anthology, with taut writing and enough gore to keep horror fans happy. It also has a very snarky ending, poking fun at that world famous omnipotent alien, Superman, for losing yet another home planet. Unfortunately, despite being a well-written story, Blackest Day also suffers from relying on the singular theme that rival American superhero comics publisher Marvel Comics has already bled dry with its Marvel Zombies imprint. The story is not an homage, nor is it a parody. It is instead a blatant copy. But, as copies go, it is a good one.

[Marvel Zombies to the left: DC House of Horror to the right.]

The weakest stories of the bunch are the three that rely upon the Batman franchise. One reimagines Bruce Wayne as a psychopathic serial killer whose life as a wealthy costumed vigilante is only a fabrication of his broken psyche. Another is a genre-hybrid that has an analogue for Harvey Dent/Two-Face revealing his serial killer activities to the reader while the earth is under attack by a giant insectoid monster. The final story in the triptych is a dialogue-heavy yarn that features a man being haunted and driven into killing by a Harley Quinn apparition, a fairly uninteresting story that overstays its welcome with an unsatisfying conclusion.

The remaining four stories are, fortunately, very entertaining. Each are fairly short horror stories that exercise creativity in their use of established superhero concepts:

DC House of Horror, despite the subpar stories relying on the Batman property, is still a decent collection of short horror stories. Most of the stories would have lost their charm without the accompanying superhero elements. But still, this collection of stories is fun. This title will make for a great, if brief, read this Halloween.