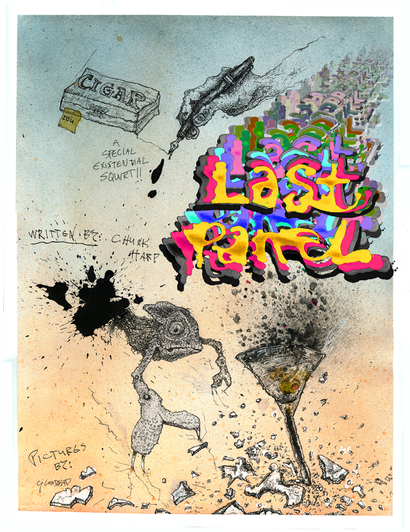 Cam the Chameleon is the star of a now defunct comic book. Cam finds his comic book series discontinued, and sits in a bar called The Harp, drinking a martini, talking to a giant water bear (we think it is a water bear). Cam is done. He does not want to he “reincarnated on a different series”. Instead, he wanders off following a sign marked “Plot Line” towards “The End”, figuratively and literally, of the story.

The sojourn is initially into a sort of creative limbo. On the way, an angry cartoon pelican rails against his own creator and advises Cam to do the same, “After all, you are merely a reflection of the creator’s emotional need.” Cam is philosophical: “It would help explain talking to myself.”

Deconstruction of comics was all the rage there for a while, from The Drummer in Warren Ellis’ Planetary theorising that universe arranged in horizontal planes to Grant Morrison’s Animal Man meeting his creator and discovering to his horror that he is merely a comic book character. Last Panel is different – it entirely pokes fun at itself. Here is the synopsis from the creators:

Inspired by the works of Dave McKean and Sam Kieth, Last Panel follows the star of a 90s hit comic series, Cameron, as he searches for The End when his series finally comes to a close.

Writer Chuck Harp’s dialogue is funny, but it is Mr Lundbad’s meticulous pencils (reminiscent of the work of Ralph Steadman) which steal the show. Cam looks very much like Rango from the 2011 animated motion picture of the same name (there are, we suppose, only so many ways you can draw a chameleon). The intricate artwork must have taken months to draw – a bizarre thing in itself given the story only takes minutes to read.

This is a surreal journey, a spoof on both Dante’s Inferno, the nature of fictional properties (see our commentary on Mark Waid’s Kingdom Come https://www.worldcomicbookreview.com/2017/11/07/kingdom-come-twenty-one-years-later/ ) and the nature of existence. How is it possible to squeeze all of this into a short comic? For Last Panel is only 11 pages long (making it very easy to review!). It thoroughly engaging, and it is free on www.chuckharp.com .

We hope that Cam has somehow survived and that we will see him again. But the cigar at the end of his journey, a last gift from his creators, suggests not.