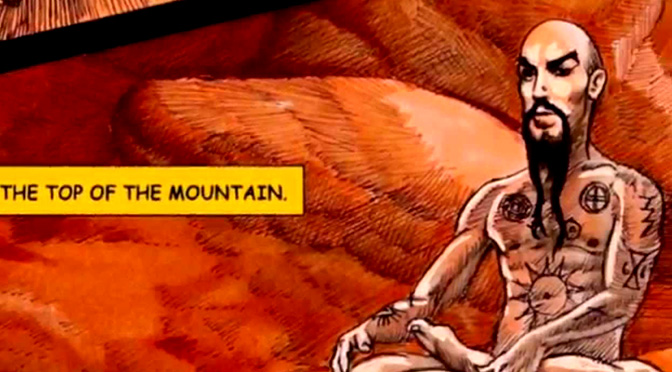 An independent publication from Australia, issue one of “The Five” explores the creation of a modern Illuminati. Members of this secret society are a pantheon of sorts: a god of international money markets, a god of global fame, a goddess of pornography, a god of tinpot mysticism (which is, perhaps, the most awkward fit of the line-up of characters) and in a surprising twist at the end, a goddess of global terrorism.

We use the words “god” and “goddess” allegorically: a better description is that each character embodies a very contemporary archetype. In that regard, the writer, Laith Tierney, trailblazes with this innovation. The idea of the creation of new archetypes sprouted from the fertile ground of our immediate history seems with the benefit of hindsight obvious. There is the man behind the Global Financial Crisis: there is the woman whose sex tape everyone has watched on the internet: and there is the woman who lays improvised explosive devices and shouts Islamist slogans over the bodies of her victims on television. These concepts and images pervade our everyday lives in this new century, and these characters in their manifestation in this title embody the parameters of our contemporary existence. This is inspired character creation.

American publisher Marvel Comics have recently been repeatedly indulging in versions of their own Illuminati, ranging from select responsible persons derived from its roster of benign superhero characters (clustered under the title, “The Illuminati”), to a council of those various alien races occupying Marvel Comics’ universe, to another council consisting of representatives of the various multidimensional planes explored in the comic book “Thor” over the decades. The other major American publisher, DC Comics, has only done this once, and briefly, in the pages of writer Mark Waid’s and artist Alex Ross’ epic tale “Kingdom Come” (1996), where ethereal figures from DC Comics’ continuity stand about in a circle and helplessly contemplate intervention in superhero armageddon. But each of these concepts recycle existing characters. No one else within the comic book industry has given any consideration to a group consisting of modern archetypes.

The supporting advertising copy for this first issue exclaims, “It’s the gathering of The Five and the beginning of the end for civilisation as we know it!” In that regard, the title is an example of a 21st century fin de siecle text. But, relating to this, the first significant problem with the first issue is the lack of any set-up or teaser as to where the plot will go next, which we expect in the structure of serialised stories such as periodical comic books. The plot is becalmed by the conclusion of the first issue.

The second significant issue with this comic is related to the art. The World Comic Book Review is not qualified to comment on the quality of art in a comic. Our exclusive focus is and has always been the quality of the writing. But we note the adoption of the clear likeness of an American actor, Carl Reiner, in illustrations of one of the characters.

British writer Mark Miller sailed very close to the wind when he had characters in his comic “Wanted” (Top Cow Comics, 2003-2004) bear a resemblance to American rapper/musician Eminem and to American actress Halle Berry. The famous Marvel Comics’ character Wolverine has often been depicted as resembling a middle-aged version of American actor Clint Eastwood. DC Comics / Vertigo Comics’ character John Constantine was based upon and has been drawn to resemble British musician Sting. A character resembling American actor Samuel L Jackson was in Mark Millar’s work on “The Ultimates” (Marvel Comics, 2002) with the irony that the actor played the role of the character in various Marvel Productions movies.

But rarely has a character in a comic book looked entirely identical to an actor such that the art is certainly a copy of a photograph of Mr Reiner.

If we assume that Mr Reiner has given no permission to the Australian independent publisher to do this, then this is passing off under Australian law, or contrary to the Lanham Act under US law (assuming that applies here). Unauthorised use of this image or series of images suggests an affiliation or association with, or an endorsement by, Mr Reiner when that is almost certainly not true. Members of the public are aware that celebrities license their likenesses to endorse goods and services, and people could be forgiven for thinking that this has happened here: that Mr Reiner has licensed to the publisher rights to use his likeness. If however Mr Reiner has in fact granted rights to the publisher to use his image, then that would be a remarkable coup to the publisher. American actress Shannon Elizabeth is reported to have granted Marvel Comics the right to use her likeness and name in the aforementioned “The Ultimates”, but other examples must be very rare indeed.

None of that adds or detracts from the quality of the writing. If the plot can catch some wind in its sails, as promised by the promotional copy, then this series will be worth following.

With thanks to Quality Comics, Perth Australia, for the complimentary copy of this issue.

Why the Portrayal of Australians in Superhero Comics is So Cliched

The Fifth Guest is an Unknown