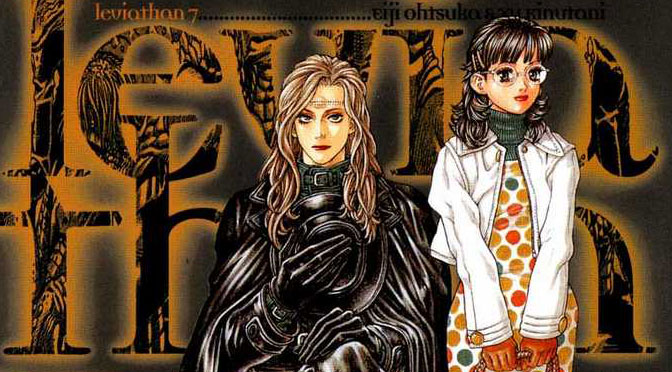 The Leviathan in the Old Testament is a dragon that dwells in the oceans, originally created with both male and female representatives, but proved to be so dangerous that God slew the female in order to prevent the species from multiplying and destroying the world. It is said that the Leviathan is a bringer of end times, and that its flesh will be served in a banquet for the righteous on the advent of the Messiah.

In the Japanese manga-style comic book entitled “Leviathan”, published by Mediaworks and written by Eiji Ohtsuka, a character named Samizo Kouhei went to Cappadocia accompanied by several friends for a UN peacekeeping mission, one in which they are tasked to negotiate with anti-government guerillas. The entire team went missing and only Samizo Kouhei managed to return. Except Kouhei now consists of the stitched body parts of the missing UN peacekeeping team, an ancient coin embedded in its forehead.

The plot of “Leviathan” does not explain much of what transpired in the UN peacekeeping mission until the last few chapters, instead focusing on building up Kouhei as a mysterious creature who is said to herald the apocalypse, bringing to mind the mythical beast in the title.

Kouhei in the manga, unlike the sea monster, is portrayed as altruistic. The character starts work as a “psychic” surgeon in an unlicensed clinic, taking on cases that deal with the supernatural and/or mystical. It was never made clear what his exact powers were, as Kouhei solves problems by talking or by using his reputation. Like the doctor from BBC’s “Doctor Who” franchise, many of the enemies that Kouhei has faced refused to directly challenge Kouhei after realizing that he is the Leviathan. In the rare cases that these antagonists do challenge Kouhei, the actions happened off panel. In the solid and proven tradition of Japanese monster stories, the allegedly destructive power of Kouhei is left to the reader’s imagination.

Leviathan’s protagonist is supported by an eclectic mix of supporting characters, each one as strange as he is and with equally mysterious origins. There is the physician Anastasia, who has a parasitic creature on her palm named Casper. There is the aloof little girl named Akane, who hangs around Kouhei and spouts random phrases that sometimes end up prophetic. There is the giant vagrant Galileo, and there is Satsuki, who fills the role of romantic interest and reader proxy, but very little else.

Leviathan does a great job of tackling the paranormal while giving the reader the option of looking at it from a more grounded perspective – one of Kouhei’s first cases was a string of rape/murder cases committed by a young boy, who allegedly comes from an ethnic minority with a demon bloodline. In this particular story, members of the clan try to blend in and function normally but when the men reach a certain age, their faces become inhuman and they begin to violently desire women. One of Kouhei’s colleagues posit that the “demons” are merely victims of a genetic mutation that makes their bones grow fast and stretch their skin upon puberty, resulting in demon-like facial features. The pain this transformation causes makes the men lose their sanity, resulting in the violent behaviour. It is implied that Kouhei knows the truth, but does not confirm nor deny the theory.

The stories in Leviathan are episodic, and structured with another Japanese story-telling tradition, the “Monster-of-the-Week” format, with the occasional side stories that help build up the bigger over-arcing story about the amalgamated Kouhei’s origins and purpose. It is with this over arcing story that Leviathan’s quality starts to diminish.

During the second half of the series, Leviathan slowly gravitates away from the episodic format and Kouhei is no longer treated as a passive element of the story but the main plot. It also starts to get heavy-handed when it comes to allusions to politics and religion, at one point even introducing an omnipotent antagonist manifesting as a George H.W. Bush caricature.

It is also at this point in the story when Leviathan completely negates all the effective world-building it did during the early chapters, simply by introducing alternate, imaginary, and parallel realities until the whole plot gets too muddled even for the most attentive reader – was everything that happened within the early pages true or just a dream? Or was reality rewritten in the middle of the story? Or was the entire series just a parable? It is as confusing as it is clichéd. Did Mr Ohtsuka just give up towards the end, perhaps realizing that the story had become too complex and overly clever? Leviathan can only be recommended during its first few volumes.