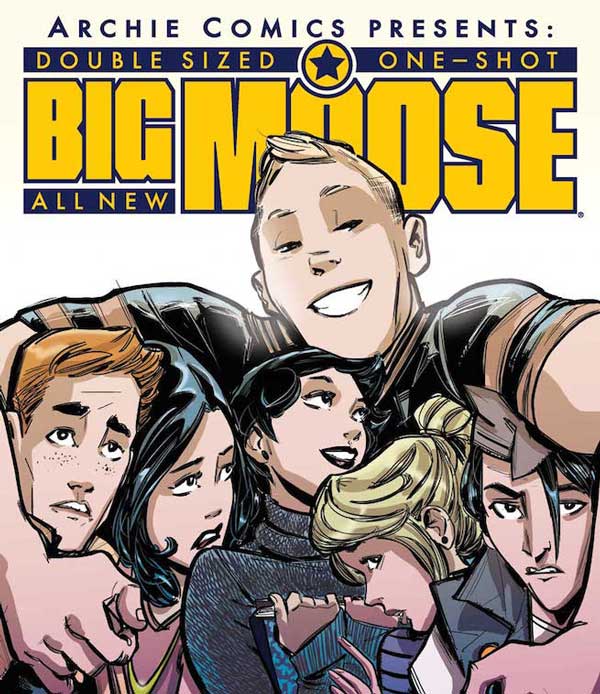 “Big Moose” is a new comic book “one-shot” spin off from United States publisher Archie Comics’ line of teen-targeted comedy series. It features the ancillary character Marmaduke “Moose” Mason, who is characterized as the best athlete in Archie Comics’ fictional Riverdale High School but also its poorest student. “Big Moose” is formatted as an anthology. It contains three separate stories that try to delve deeper into the character, while still retaining a semblance of the humor present in Archie comics (which could be described as either “safe and relatable” or “bland and generic,” depending on the reviewer’s perspective.)

The first story in “Big Moose”, written by Sean Ryan, is titled “Moose vs. The Vending Machine”. It focuses on the character struggling to get snacks out of a vending machine, sans money. Making matters worse is his girlfriend “Midge,” who wants Moose to abstain from eating anything because a well-fed Moose will not be able to eat during their date later in the evening. Sean Ryan preserves the light-hearted and humorous tone of the classic Archie Comics yarns, but it should not have been placed in the beginning of the issue. The banal subject matter sets the bar very low. A reader thumbing through the comic may get the impression that this is as good as the comic is going to get.

The second story, written by Ryan Cady and titled “Have it All,” adopts a more introspective tone. Archie Comics has always relied on one dimensional characterization for its main roster of characters, with Moose being saddled with the “dumb jock” stereotype. In the classic “Archie” yarns, Moose is portrayed as being extremely strong (to the point of exhibiting inhuman strength) but having an inversely proportional intelligence. This has resulted in Moose being characterized as inhumanly stupid. “Have it All” paints the character as more grounded and human. While Moose is still shown as excelling in athletics while having difficulties with his studies, the degree to which they are shown fall within the norm. This is easily the strongest story out of the anthology, and actually makes a great case for Moose’s poor academic standing as it follows the teenager in his daily life, juggling school, sports, his relationship with Midge, and trying to meet his parents’ expectations.

The third story is written by “Gorf” (a pseudonym used by cartoonist Jordan Gorfinkel) and is entitled “The Big Difference.” This story tries to find a middle ground between the straight up gag story format of “Moose vs. The Vending Machine” and the more realistic tone of “Have it All.” Unfortunately, this ends up weakening the substance. In addition, Moose is not the main focus of the story – rather, it revolves around a handicapped kid who tries to prove himself against Moose. The shift of focus affects the thematic consistency of the anthology. There are also problems with pacing as a result of the abrupt introduction of the new character, coupled with jumpy panel transitions that could leave some readers wondering who this new character is and why he is following Moose around. The story is only salvaged by the fact that it carries the most profound (though cliched at this point) message out of the three stories.

To a new reader, “Big Moose” may come off as a bland and uneventful. This is not the fault of its writers. “Big Moose” carries with it the requirement of familiarity with the franchise which spawned it. The novelty of a more realistic yet still humorous depiction of Moose Mason will be lost on someone unfamiliar with the Archie Comics franchise, but to the target market, devoted fans of the franchise, “Big Moose” is successful in delivering a deeper, more substantial take on a character that is usually no more than a punchline.