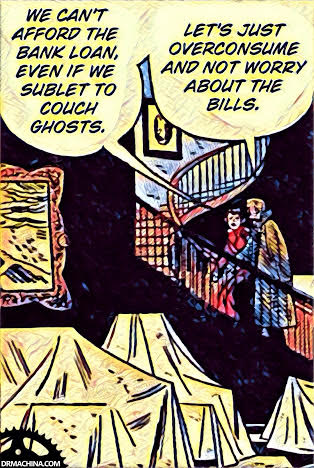 Strongly recommended to fans of surrealism, Single Cell is one of the strangest comics we have had the pleasure to review.

Single Cell consists of a series of unrelated one panel pages. Each panel consists of what appears to be obscure or forgotten comic book art, some apparently from science fiction comic book stories, some suggesting a lost origin as a horror story. Comic books are typically sequential in their story-telling. But Single Cell is entirely non-sequential. There is no perceptible pattern to the sequence of the panels other than each panel contains old comic book art and dialogue. The dialogue is random and amusing.

This comic comes slightly a century after the inception of the Dada movement. As noted on the Metropolitan Museum of Art website:

“[Dadaism was] experimental, provocatively re-imagining what art and art making could be. Using unorthodox materials and chance-based procedures, they infused their work with spontaneity and irreverence. Wielding scissors and glue, Dada artists innovated with collage and photomontage. Still others explored games, experimental theater, and performance. A central figure, Marcel Duchamp, declared common, manufactured goods to be “readymade” artworks, radically challenging the notion of a work of art as something beautiful made by a technically skilled artist.”

Rational choice led to the deaths of millions in the world’s first industrialised war. Dadaism therefore rejected rationality and logic. Chance and illogic, rather than logical choice, was an integral part of Dadaism’s protest.

But the dialogue in this text seems something a little different to wild chance. There appears to be very wide, poorly applied parameters to the dialogue. We asked Dr Machina whether he had applied a nascent machine learning-based dialogue generator to the art panels. His response was insightful:

“Machine learning tools are being used for dialogue and visuals for the panels. Some hand work as well…. the surreal effects are part of the tone and meaning of the comic but also the machine learning tools are a unifying element that can bind the comic universe together across genre and time…. [there is] a layer of social critique, which is about the mysterious digital divide in our lives.”

So Dr Machina’s contemporary adoption of the Dadaist ethos is not a scissored photomontage: his cutting tool is instead an artificial intelligence with an imperfect data set.

The title itself incorporates two other very poetic introductory critiques:

a. “Dr. Machina is both provocative and inspirational. Taken in single doses or binged in a marathon setting, these panels from the strange recesses of comic book history have been re-enchanted with a mix of digital processing and wit. Bizarre locations, D-list characters, and genre scenes transform into snapshots of a surreal pop culture universe. This is the stuff of superhero dreams. Some pages will draw an immediate laugh. Others will linger long in the imagination. Together the collection invites us to consider the unconscious life under all the masks and costumes of popular entertainment. Irreverent yet oddly humane in its treatment of long-forgotten heroes, Dr. Machina is a unique resource for both comic book fans and creators.” (Anthony Collamati PhD, Professor of New Media Studies)

b. “Dr. Machina appears like an oracle processed by the goddess of artificial intelligence hunting in the fields of American comic-history. Dark creatures, superheroes, distinguished gentlemen and mysterious women produce absurd dialogues in single panel esthetics fabricating an enjoyable sense of strangeness. Dr. Machina offers a stunning body of visual esthetics and conceptual framework in a playful way. The references to the esthetics and ideals of the 1950s are corresponding with American Pop Art, but the work is more pleading for the exploration of a new digital reality. It uses the collage-like capacity of comics to show that perception is always an active process of incorporating and reevaluating different vantage points and is using elements of digital communication to compose an impressive but joyful series of contemporary graphic art.” (Sabine Küper-Büsch, InEnArt)

Perhaps. Who knows? With such an amorphous collection of works, multiple interpretations are possible. But we think both of these informed comments are clearly correct about one thing. Single Cell is terribly silly. Perhaps we should not overthink the meaning and instead just enjoy the fun. We have a favourite:

It is genuinely amusing to look at this and think of how an artificial intelligence struggled to understand why sheets would be placed over furniture, and then extrapolated this conclusion.

We look forward to Doctor Machina, in due course, expanding his collection of droll software-generated cultural artefacts. Single Cell is available on Amazon.