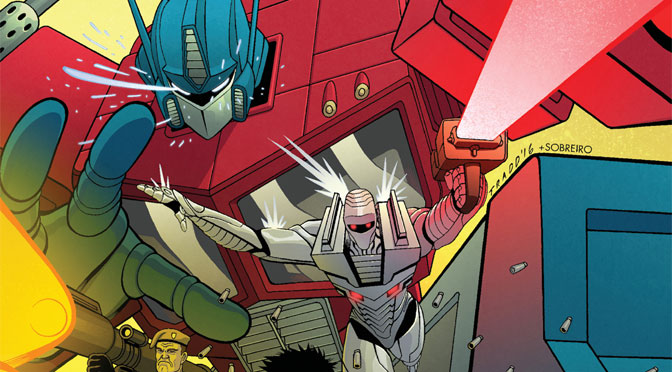 And now it seems IDW Publishing are following the tired, weary path of cross-selling. The title does not immediately make it clear but “Revolution” #1 is the first installment in a massive inter-franchise crossover event from IDW Publishing, featuring popular toys and cartoon properties including “Transformers”, “G.I. Joe”, “Action Man”, and “ROM”. While not present in the first issue, IDW also announced the inclusion of “MASK: Mobile Armored Strike Kommand”, another toy line from the 1980s. This follows on from an announcement in 2015 between IDW Publishing and Hasbro, a toy manufacturer, to extend their licensing arrangement for an unspecified period of time. The license apparently had an initial duration of ten years. Unsurprisingly, the crossover event excludes one of Hasbro’s most successful toy lines, “My Little Pony”.

IDW Publishing are the fifth largest publisher of comic books in the United States. The business specialises in publishing the comic book adventures of character properties owned by third parties. Outside of Hasbro’s toy line, this includes the Doctor Who franchise (owned by the British Broadcasting Corporation), “Back to the Future”, “Dirk Gently’s Holistic Detective Agency”, “Orphan Black”, and “Fear and Loathing in Las Vegas”, “Astroboy” (Imagi Studios), “Ghostbusters”, various Disney characters, EA Games’ properties, Konami’s properties, and many more. This strategy is designed to lever upon consumer recognition of the properties to achieve sales, but it means that creative control over the properties is relatively limited. Why that creative control was not properly exercised in this series is unknown.

Plot-wise, there is a lot going on in “Revolution”, but not in a good way. A mountain full of crystals meant to be energy sources (or food, as one of the characters succinctly put it) for an alien race called the Cybertronians, part of the “Transformers” franchise, has exploded after a battle between a group of soldiers forming part of the “G.I. Joes” franchise and an unknown group, leaving a number of G.I. Joes dead. The explosion caused a disaster both political and natural in nature: as a consequence, some places on Earth have experienced massive weather disturbance resulting in flooding (a comic book nod to global warming?). The connection of the crystals to the malign Cybertronians convinces the White House and the G.I. Joes that world domination by alien robots is imminent. All of this culminates in a one-sided fight between the Joes and a faction of the Transformers called Autobots during a humanitarian relief-mission. This fight is further complicated by the sudden appearance of ROM the Space Knight, who proceeded to kill a number of G.I. Joes without any explanation, causing even more suspicion to fall on the Autobots.

The plot that is readily seen in “Revolution” #1 is flimsy. The premise of heroes fighting each other due to a fundamental misunderstanding is long stale. It is made worse in this case because the unnecessary fight is between two groups that should have access to advanced intelligence gathering systems. It stretches the imagination that the G.I. Joes would automatically go to war against a superior force without so much as asking for an explanation from the Autobots first.

It is also odd that a U.S-Government sanctioned paramilitary group would launch an assault while the Autobots are in the middle of a humanitarian aid effort, with numerous civilians present. Couple this with the G.I. Joes further pressing their attack, after Autobots leader Optimus Prime tries to explain the Autobots’ peaceful intentions. One has to wonder whether the writers are hinting that the uncharacteristically blood-frenzied GI Joes are not who they seem to be.

It is easy to excuse the messy story by saying that it is meant for children who just want to see their favorite characters beat the daylights out of each other, but ROM’s murderous rampage and the resulting deaths of several characters make it apparent that the two writers, John Barber and Cullen Bunn, are out to shock a mature audience at the expense of rationality.

We assume that there are details that will materialise in later issues, which will explain the odd behavior of many of the characters in the story. But the setup is sadly ineffective. The first issue does not inspire confidence in the next instalments. It reads like the comic book equivalent of a kid dumping a bunch of toys on the floor and making the story up as he goes along – which might be the avant-garde intent, but we frankly doubt that level of deconstructive innovation. IDW Publishing has already proven via Predator vs Judge Dredd vs Aliens that it is possible to fit in different franchises in a single crossover comic without completely sacrificing quality. The chaos in the scene below is entirely representative of the plot.