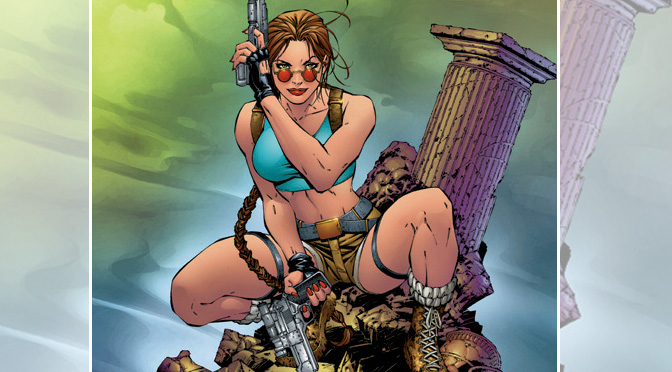 Guns and comic books have a long-standing relationship, but the use of guns in comic books very much dependent upon the respective comic book sub-genre.

War-themed comic books published during World War Two and after featured characters which had, as a rule, no qualms about shooting dead opposing soldiers in often stylised, bloodless battle scenes. These sorts of exchanges of fire are most prevalent in the very long-running series, “Commando: For Action and Adventure”, a British war comic published by D.C. Thompson & Co since 1961 and approaching its 5000th issue. Soldiers die from gunshot in “Commando” stories, but gore is never depicted.

This absence of bloodshed in these comics is a sanitisation of war for a youthful audience. There is no torn flesh and bone by sniper rifle, no fly-infestation of shredded organs by machine gun. To a very significant extent this absence of gore glorifies war: it makes it harmless save for enemies dropping bloodlessly to the ground, and the hero’s occasional, barely-debilitating bullet wound in the shoulder (one of the few bullet wounds not likely to be fatal).

This has changed in more recent times, with comic books following the lead of online games such as “Gears of War”, but also by writers seeking greater realism as the audience has grown older and more sophisticated.

Firearms are also an extremely important element in Western comics, broadly popular from the late 1940s to the 1960s particularly in the US and Italy. Set in the western United States during the period of often lawless European expansion into Native American lands, these confrontation is likely to be resolved in a shoot-out (or sometimes a punch-up) between lawmen and rustlers or train robbers, or between cowboys and Indians with the timely intervention of the US Cavalry.

But both of these genres did not personify guns. The weapons were ancillary to plot tension, not the heroes of the piece. That same can be said of adventure comics (most recently typified by titles such as “Tomb Raider”) and espionage-themed comic books (noting that even in the latest James Bond comics, which we have reviewed has the title character still carrying his trademark “women’s” Beretta).

Science fiction, fantasy, and superhero genres have sometimes taken a different approach. In war comics and in Westerns, there is no substantive suspension of disbelief. But in these other genres, the fantastic nature of the plots, contexts and characters presents opportunities to create radically bizarre types of firearms.

This is the exception rather than the rule in superhero comics. Superhero comics in the United States have a very long tradition of not using firearms, the origins of which discussed in this article in The New Yorker In the 1940s there were apprehensions about private citizens wielding guns (Captain America could wield a machine gun in combat, but Batman’s pistol disappeared in the character’s first year of creation).

a. the use of guns by people with superhuman powers more formidable than any gun seemed ludicrous (as it does for a current incarnation of DC Comics’ character “Green Lantern” – why bother with a sidearm if you possess a ring that can create plasma constructions limited only by your imagination? Even “The Shadow” a 1930s pulp antihero, with his “power to cloud men’s minds”, is probably over equipped with his twin pistols); and

b. in a genre typified by recurring villains, fatalities by gunshot would unhappily thin the crowd.

This is usually vindicated within the story of a comic book by a moral high ground on the part of the superhero.

The notable diversion from this was during the 1990s, when Image Comics published a series of titles consisting of cybernetic soldiers carrying futuristic rifles, copied to a limited extent by Marvel Comics. This “cyborg” theme to the superhero genre was reasonably short-lived.

Villains of course frequently use firearms in comic books, often to lethal effect. Anti-heroes such as Deadpool, Cable, and the Punisher (Marvel Comics) , Deathstroke the Terminator and the Vigilante (DC Comics), Stryker and Ballistic (Image Comics), The Shadow (Street and Smith) and many others buck that trend. But both villains and anti-heroes tend not to use specific, personified weapons. Instead, the characters are equipped with an arsenal of off-the-shelf, basically ancillary weapons.

Below is our list of the eight most iconic guns in use in comic books. (It is worth noting that, perhaps because of the prevalence of that country’s gun culture, seven of the eight of these are from US comics.)

The title “Judge Dredd” is the most successful character property owned by British comic book publisher 2000AD Comics. We have spoken of “Judge Dredd” before but not of his famous automatic handgun, called the “Lawgiver”. “Judge Dredd” was created in 1977, and true to the design ethics of the time, the Lawgiver has a clunky, oversized dial.

“Hellboy” is title published by Dark Horse Comics since 1993, concerning a demon summoned from hell as an infant by Nazis during World War Two, and thereafter was liberated by Allied forces. Hellboy is sardonic rather than evil, and fights dark mystical forces.

Hellboy wields a gun called “The Good Samaritan”. It is sidearm is a large calibre four-round revolver. The barrel and action made from a fusion of Irish church bells, cold iron from crucifixes, blessed silver and with a grip carved from fragments of the True Cross upon which Jesus was crucified.

The gun fires impervious bullets, and occasionally special rounds called “whoppers” which contain materials such as silver shavings, holy water, garlic and others which can harm supernatural foes.

This is a shotgun which fires bursts of hellfire (mystical flames from hell) and can be lethal to supernatural enemies. It does not require reloading. The firearm is used by a character named Johnny Blaze, the occasional alter ego of Marvel Comics’ spirit of vengeance, “Ghost Rider”.

When writer Brian Azzarello, of whom we will discuss further below, decided in 2011 to revamp DC Comics’ “Wonder Woman” title by making those supporting characters who are classic Greek gods more contemporary in their look and personality, this included the god of love, Cupid.

For a short time Wonder Woman uses these guns. The guns are ultimately used to shoot the dour ruler of the underworld, Death, as he looks into a mirror.

This is a paradigm shift from the traditional depiction of Wonder Woman using mystical bracelets to deflect bullets: the character in this story instead uses them.

In 1973, Archie Goodwin and Walt Simonson wrote a series of stories for DC Comics’ title “Detective Comics”, featuring Batman, about a character called “Manhunter”. This story has attracted a cult following amongst a section of American superhero comics readers.

The title character of “Manhunter” was deliberately designed to contrast with Batman, and this included carrying lethal weapons.

This included a Mauser C96, a semi-automatic pistol manufactured from 1896 to 1937. This is a very esoteric, visually distinctive firearm for a costumed adventurer.

In 2007, British writer Warren Ellis penned for Avatar Press a grim superhero story entitled “Black Summer”. The premise of the story is government conspiracy and a superhero killing the President of the United States, justified as a legitimate overthrow of tyranny.

The superhero protagonists are called The Seven Guns. Almost all of The Seven Guns carry a sidearm. These weapons are linked to cybernetic enhancements. The most notable of these are the gun of Kathryn Artemis, which fires rapid scattered rounds, Tom Noir’s gun called “Inquiry” which can fire armour-piercing tungsten rounds, and the gun of a deceased character, Laura Torch, which fires devastating explosive rounds and brings the story to a close.

7. Batman: the Batmobile in “The Dark Knight Returns”

Much has been made of DC Comics’ paramount character “Batman” being associated with a disavowal of this use of firearms. (This is aside from the first year of the character’s existence when the goal of writers and editors was to copy the success of “The Shadow”, who, as we have noted above, wielded guns.)

Having said that, the tank (the Batmobile) has a twin set of cannons equipped with non-lethal rounds.

Brian Azzarello wrote an epic noir story from 1999 to 2009 entitled “100 Bullets”. The story contained a recurring test of morality.

A key character, known as Agent Graves, offers in the shape of an attaché case to various individuals undeniable proof of terrible wrongs committed against them, and a means to extract revenge: a pistol with one hundred rounds, all untraceable and which if found would cause any police investigation to disappear.

Some of these stories are heart-wrenching.

But Agent Graves is good to his word: the use of the gun leads to police disinterest. In that regard, the otherwise remarkable gun is as unique and distinctive as any other in this list.