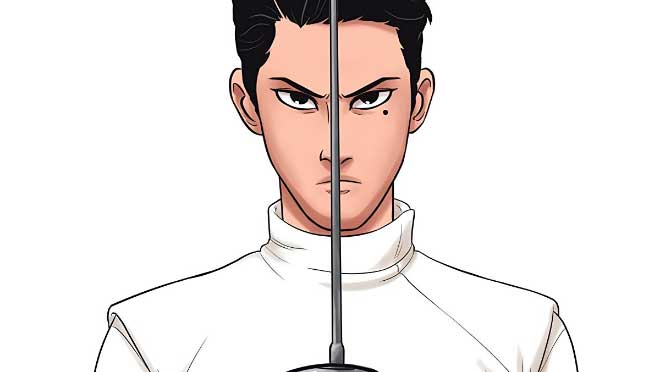 Fence is a new comic book series from American comic book publisher BOOM! Studios, written by Melbourne-based writer C.S. Pacat. Fence is a slight departure for Ms Pacat, who is known more for romance and fantasy novels. Fence, while still having a predominantly teenage male cast, focuses on the sport of fencing, hence the title. With the benefit of hindsight, given the global obsession with swords by writers of comic books (Frank Miller’s Ronin, Magik in Uncanny X-Men, He-Man and the Masters of the Universe, and titles we have reviewed such as God Country and Bleach), and the sense of motion which is so easily depicted by a swinging sword within a comic book panel, a story about teen struggles in the context of fencing seems obvious and overdue.

Fence’s story revolves around a 16-year-old boy named Nicholas Cox, a poverty-stricken orphan who aspires to become a world-class fencer. Nicholas’ motivation is implied through flashbacks. Though not explicitly stated, Nicholas’ father is a successful fencer and Nicholas seeks to emulate that success. However, the fact that Nicholas is living alone and in poverty means that there is a deeper story as to where, and who, Nicholas’ father really is and even whether that story is true.

Nicholas’ struggle to become a fencer includes convincing an over-the-hill, retired coach to give him lessons in exchange for menial labor and saving up for the admission fees to a regional competition. Nicholas suffers from derision he receives from bullies and potential rivals. All of this brings to mind iconic 1980s teen inspirational action movies such as Karate Kid and Footloose.

Nicholas himself comes off as stereotypical at first. He is stoic and confident, naturally gifted, and diligent in his training. The reader is lulled into expecting the protagonist to steamroll his detractors. Nicholas faces an extremely self-confident fencing prodigy named Seiji Katayama as a first opponent.

Seiji Katayama is known by every one in the competition for his skill, and for being the big fish in their little pond. Katayama would be competing at a much more prestigious competition, if it were not for the league’s regulations that competitors who lived overseas must compete at the regionals in order to requalify for the nationals. Katayama even predicted the outcome of the match: he will beat Nicholas 15-0.

It is refreshing that all of the obvious setup for Nicholas to assert himself as a prodigy is nothing but a red herring. Katayama humiliates Nicholas and the protagonist is not even given a chance to get a single score. Even his threat of revenge is treated as a joke, by having Katayama point out that numerous other fencers on the bench have already lost to him in the past. Each have made the same threat. None have been fulfilled.

Despite the loss, Nicholas remains hopeful and determined, and so tries to get into the fencing team of Kings Row Boys School. This is partly because of the scholarship it entails, and partly because it could give him a chance to compete against Katayama.

We at the WCBR make it a point not to comment on a comic book’s art, due to not having enough expertise to make judgments on the very subjective matter of visuals. However, the surprise twist in Fence #1 falters due to problems with the art style. The art style employed in the comic, though clean and visually pleasing, seems to be rudimentary to the point where it can be hard to differentiate between different characters, outside of obvious tells such as hair and skin color, and physical markings.

The last page of this comic shows Nicholas visibly surprised at who his roommate is. The average reader may feel lost at this point, since it can be difficult to recognize the character as Katayama, unless the reader specifically pays attention to the character’s mole on his face or by checking the synopsis (which reveals that Nicholas will struggle with sharing a room with his rival Katayama.)

Outside of that slightly tangential complaint, we are pleasantly surprised at the quality of Fence. The target market for this title plainly is young adults, so mature readers might find some aspects of the story very cheesy (for example, the story is most likely building up to a bromance arc between Nicholas and Katayama). But the skills that the writer developed in the genre of young romance novels have successfully translated into this title, which in our view would be properly characterised as shonen manga.